Eating for the Hard Gainer by Joe Meeko 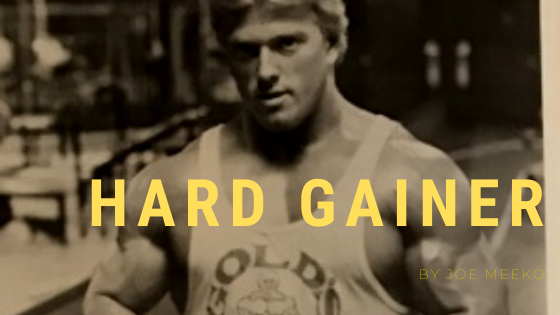 “When I became seriously interested in bodybuilding, I attended a number of seminars conducted by top bodybuilders – Mike Mentzer and Gary Leonard, to name but two.

The majority of the seminars were on nutrition and, quite frankly, I wasn’t all that interested in listening to a talk on how to eat. I wanted to know how to train – what exercises were best for what bodypart, etc.

I wanted them to tell me how to become bigger…and they were doing just that but I was too naive in the sport to realize it. Eventually, though, I saw the light. And from these seminars – and from a lot of nutrition articles I’ve read subsequently – I’ve learned that bodybuilding is about 75 percent nutrition and 25 percent hard training.

Believe me, there is much truth to the saying, “You are what you eat.” You can train for hours on end in the gym but if you don’t eat right, you’ll gain nothing.

An example of this can be seen in abdominals training – you can do 1000 situps a day and all of the leg raises you want but your abs won’t show through if you don’t eat the right foods to burn off the fat in and around these muscles.

When I began bodybuilding – and I’m sure the same is true for most beginners – mass was very important to me. We all want to become bigger so we go to the gym and train like madmen. Because of this, we think we are going to grow. But, as stated, we must eat the right foods – and in sufficient quantities – in order to obtain the mass we want. 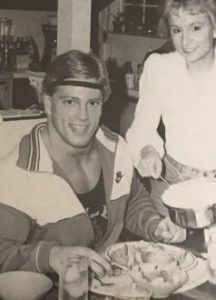 By eating the right foods, I mean good quality protein and good quality carbohydrates. Even if you are training properly and eating the proper foods, however, you still might not grow if you’re not eating enough. This is the problem I encountered when I started training.

Because of my unusually fast metabolism, I had trouble putting on muscle-weight even though I was training hard and eating right. To solve this problem, I began to force-feed myself..even when I wasn’t hungry. Of course it was a very uncomfortable way to gain weight, but I thought it was necessary.

I would eat until I felt as though I had to vomit, and then I would relax awhile until the feeling of nausea went away. Then I would force something else down..and this process went on throughout the day. I even had to start force-feeding myself with high-calorie junk foods once in a while because the good foods I ate didn’t contain enough calories for me to have a positive weight gain.

At first, as you might imagine, this method simply does not work, because your body will reject the extra food you are taking in. After a time, though, the body will begin to accept the extra food and you’ll begin to put on weight. The time span for this effect, of course, will be different for everyone. Some words of caution: I am not recommending that someone force-feed himself the way I did, but if you are not gaining weight and you are training hard, you are simply probably not taking in enough food.

If you are trying to bulk up and put on mass, you will have to sacrifice some muscularity or “cuts”. However, don’t let more than an inch of fat accumulate around year waist. Anything more is an abnormal amount while trying to put on size.

Now for some specifics: Most of the food you consume should come from natural sources — protein, for example, from egg whites, fish, chicken and good lean meats, and your carbohydrates from potatoes, pasta, breads, fruits and vegetables.

Also, keep your fat consumption as low as possible. In fact, the fat you’ll get from even the lean red meats will be sufficient. By all means, though, avoid butter, cheeses, cakes and pies – these are true junk foods which will go right to your waist and they are very difficult to work off.

An average meal for me is as follows: My protein is consumed first because the digestion time for this food element is longer than that for carbohydrates. Therefore, I start with two-dozen egg whites, a pound or so of haddock, and about a pound of chicken breasts. Then I have my carbohydrates – a half-box of spaghetti, a bowl of rice, and a fruit salad consisting of two bananas, grapes, chunks of pineapple and apples.

Now get ready for what some people consider a shocker. With slight variations in some of the protein and carbohydrate sources, I repeated this meal about five times during the day.

One important rule in any weight gaining program is to eat a greater number of smaller meals – as opposed to a few larger ones – because your body will absorb more nutrients this way.

Now I realize that the meals I eat might seem rather large, but they are average for me because I burn up the foods quickly due to my metabolism. If I didn’t eat this much food I would start to shrink and burn muscle.

As far as food supplementation is concerned, you can get part of your protein source from the powdered drinks on the market, which are easily absorbed by the body. In the past, I used two or three protein drinks – mixed with whole milk – per day.

Now, I take a protein drink right after a training session. Each drink contains at least 30 grams of protein and it may even contain enough carbohydrates for quick energy. I mix the powder with orange juice – or any other juice – or low fat milk.

Recently, I have been taking free-form amino acids. They are quickly absorbed by the body and they help, specifically, in recuperation. Since taking the aminos – usually five or six tablets with each meal – I don’t seem to get as sore the day after a workout.

As for the natural growth hormone stimulants – arginine and arnithine – I have not tried them as yet but I intend to in the near future.

Vitamins? I don’t go overboard with them since I get most of my vitamins and minerals from the foods I eat. But bear in mind that many of the vitamins are water-soluble – cannot be stored – and your body needs and uses them every day. Among these are the B-complex vitamins and vitamin C. You also need an adequate source of minerals for normal body metabolism and growth.

For some, of course, there is a definite need for vitamin mineral supplementation, especially if food intake is inadequate or if one fails to eat balanced foods. Although many of the vitamin-mineral supplements available commercially are fine, seek out those which are time-released, balanced and highly absorbable.

An excellent book on nutrition, one which should be a must in any bodybuilder’s reference library, is The Nutrition Almanac, published by the McGrow-Hill Book Company of New York City. It can definitely provide the answers to most of your questions on nutrition.

Please remember that the amount of force-feeding I did is not recommended for everyone – even if, like me, you are a hard gainer. I went about it in a slow, gradual way over a period of years until I was able to consume all the food that I new eat. I only suggest you try it if all else fails.

Remember, too, that muscle mass does not come easily. For some, it takes years of proper eating and hard, consistent training. So if you’re not gaining weight, be patient and don’t get discouraged. Keep training hard and eating quality foods in sufficient quantities and the gains will come.”