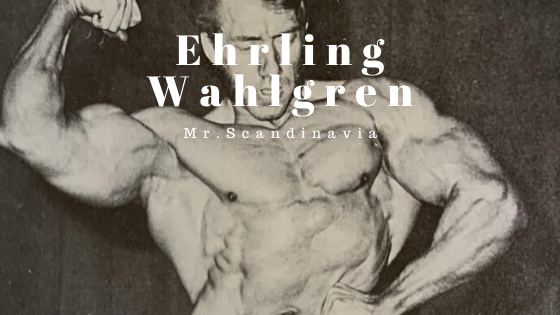 Ehrling Wahlgren was a bodybuilding champion and well known in North Europe (Scandinavia, Sweden). He favored training with heavy weights especially he enjoyed hack deadlifting. He managed to hacklift 780lb/350kg! In this article you will learn how he trained, ate and lived. Keep pumping – Mr. Berg!

Ehrling Wahlgren, born October 27, 1946 in Ystad, is a Swedish weightlifter, bodybuilder, and personal trainer. Ehrling is a real individual. He refused to train in a commercial gym and preferred the solitude of his home gym. He felt that the large majortiy of fellows who frequent the gyms are not really serious about training and went there only to socialize. Therefore he trained alone at home, avoiding the chatter and distraction of others.

Ehrling Wahlgren: “I just don’t have time to waste, so I have to make the most of time I use for training.”

Ehrling mentioned that he had always been interested in sports and his interest in Louis Cyr, the great Canadian strongman led him to start lifting weights. Also, his father was a professional acrobat, so this exposed him to a great deal of physical activity as well.

In 1963 he started training solely on the Olympic lifts and without any special training he won the Junior National Championships in Sweden. His best official press was 330 pounds done in strict press fashion.

It was in 1969 that Ehrling got away from the Olympic lifts and went in purely for bodybuilding and powerlifting. He is extremely strong and believes there is a direct correlation between strength and size of the muscle.

In his workouts he will work up to 420 pounds in the bench press, 600lb on the squat and has done 720lb in the deadlift and hack lift in training. One of his greatest feats is a seated press behind neck with 300 pounds! All of these lifts were done at a bodyweight of 210 pounds. Regarding Ehrling’s favorite exercise, the deadlift, he has never beaten in a contest.

Up until 1972 Ehrling would train only five or six months out of the year, training up to the time of the Mr. Universe in September and the Mr. Scandinavia in October. However, in 1972, because of his studies, he was not able to train at all. When he started back training in 1973, his bodyweight had dropped to 180 pounds. But after five months of intense training, his bodyweight had shot up to 210, a gain of 30 pounds of solid muscle.

In so doing he put 4 inches on his arms! His hard work really paid off as he was able to break into the top five in the Mr. Universe and also win the Mr. Scandinavia title hands down.

Ehrling is a real individual when it comes to training. He isn’t concerned with the latest routine or training time. He believes in his own methods, using four or five movements per body part, never using one particular movement for more than two months.

At the end of the two month period he likes to have increased the poundage used in a particular execise by at least 30 per cent. After he has done this he figures he has gotten about as much as he can and will switch to another movement.

Ehrling trained four to six times a week. Super sets are a must with him and he is a real fanatic about doing all exercises ultra strict. His method of using high reps, never under 12, is a little unusual to what most bodybuilders generally do. He also trains at a very fast pace, resting only of time it takes to go from one exercise to another.

This big Swede is a medical student so you can see that his training must be quite concentrated to allow him to fit his training schedule into his budy day.

In his spare time he worked as a nutrional advisor at several of the health food stores. His studies have eased a bit as most of his work is clinical, and he does not have to hit the books quite as hard.

Like all bodybuilder, he places a great deal of emphasis on diet and nutrition. His diet consists mainly of protein rich foods such as milk, cottage cheese, meat, fish and chicken. Along with this he eats a samll amount of vegetables and fruit. And he insists on drinking distilled water only because all the impurities have been removed. He does not put much faith in the buildings up diets that were popular several years ago, but now somethat on the decline.

He feels that the fellow who is always trying to bulk up for the sake of weighing more is only fooling himself. He says too many bodybuilders kid themselves into believing that because they weigh more and are somewhat bigger, consider themselves really improved. Which may not be the case at all considering a large portion of the weight gained is excess fatty tissue.

Besides following a good diet, Ehrling, like all serious bodybuilders uses a lot of supplements, taking a large amount of ptrotein, desiccated liver, and vitamins E and C. His intake of protein is about 400 grams daily when in heavy training.

Ehrling was very usscessful in competition especially in winning the Mr. Scandinavia contest (1973) over some very stiff competition!