Exercises for Strengthening the Grip 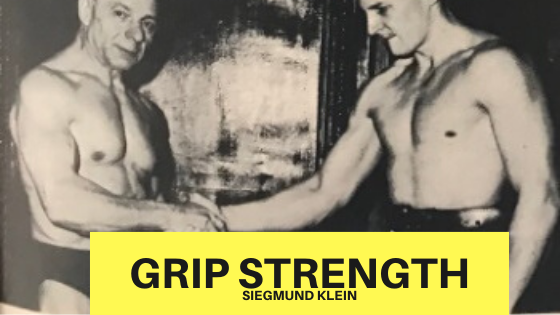 The following article was written by oldtime strongman and bodybuilder Siegmund Klein in 1965 April (published in MD). – Mr. Berg

“Bodybuilders do not have the grip they should have! I know. For many years I have tested bodybuilders on gripping stunts and have found very of them possess the grip that their large biceps would indicate. On the other hand, weightlifters as a rule have good grips for cleaning and snatching heavy weights demands a powerful grip. This also holds true for deadlifts.

I have here at the gym a dynamometer made by the Narragansett Machine Company (I doubt if they are made any more) which registers gripping power from zero to 200 pounds pressure. In all the years that I have tested athletes on this machine I cannot recall any bodybuilders squeezing this machine to 200 pounds! Some years ago Steve Stanko, John Grimek and John Davis, all weightlifters, registered 200 pounds and that take some gripping power. How many bodybuilders can support their weight by grasping a climbing rope with one hand? A regular climbing rope measures 1 3/4 inches in diameter or 5 1/2 inches in circumference. Having tried many on this feat I found most could not do it.

Pinch gripping has always been a feature of the old time strong man. Often they would have a block of iron on the stage and challenge anyone to come from the audience and lift it from the floor. It looked easy but very few ever did it.

Here at the gym we have a French “block-weight” that weighs 20 kilograms or 44 pounds. These blocks are used in France to test scales just as 50-pound blocks are used here. The French block weight measures 5 1/2 inches across the top and enlarges to 6 inches across the bottom. It is this taper that makes the French block weight so difficult to lift.

Some strong men could, by grasping the top of this block, with one hand lift it off a table or the floor. Two men here at the gym could each carry the block a distance of 20 feet and one of the men was a business man. The other was a football player named Harry Kloppenburg. Both men had large hands.

I placed a ten dollar bill under the block and offered Kloppenburg the ten dollars if he could pick up the block with one hand and take the money from under the weight. He did.

French strength stars have lifted such a weight off the floor, raised it to the shoulder height then muscles it out. Another popular stunt was to have an assistant lie face up on the floor and the strength performer would grasp a block weight with one hand and pass it over the assistant’s face from one hand to the other. That takes terrific pinching and gripping power for just one slip and the 44 pounds would land on the assistant’s unprotected face. 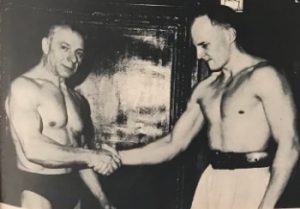 The best way is often the simplest and I have advocated the handshake exercise for many years. Grasp hands with a friend as in a handshake. Both squeeze hands together and hold for several second then release. Repeat several times.  Follow this by applying short, fast handshakes doing about 15 repetitions. Be sure to use the small finger; most people when gripping hardly apply the small finger to any extent.

Next try supportin yourself by grasping the two-inch rafters in the basement. Here you will find the real test of pinching power. Few untrained men can do this but I have seen lifters move hand over hand for several feet in this manner. That means that for a fraction of a second they are supporting their entire weight by a one hand pinch grip. 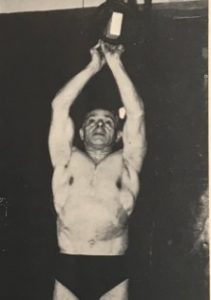 A handy piece of apparatus for your gym is the pinch grip block. It is a wood block 2 X 4 about 6 inches long with a screw hook fastened on the 2-inch side. Slip a piece of chain onto the screw hook. Attach a bar or just plates to the chain. By pinching the block lift this weight up and down until your grip begins to slip.

Rope climbing is a capital exercise that I highly recommend for improving one’s gripping power. Rope climbing, besides being good for the grip, is fine for the upper arms, deltoids and upper back.

As a youngster I did quite a lot of rope climbing at the Cleveland YMCA. Later, when I got my own gym, it did not have as high as ceiling as the Y. An improved system of rope climbing was practiced. I would first grasp the rope about shoulder height with hands close together, then would pull my body up as in chinning. As I started to lower myself I would immediately change hands on the rope, placing one hand above the other and would continue this type of “chinning and climbing” until I had reached the top of the rope. I would lower myself in the same manner keeping the hands close together.

I would take about ten “chins” to get to the top and the same number going down to the starting position. This I found to be much better than doing 20 chins on a chinning bar. I still include this exercise in my regular workouts. 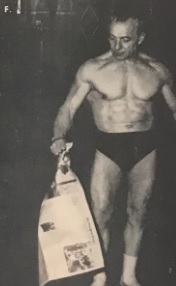 Another very effective grip exercise is to take a newspaper which is 15 X 22 inches and opens out to a sheet of 30 X 44 inches. Grasp the sheet of paper by one corner with one hand and roll it up into the hand until it is a tight ball in the palm. Each and every finger will get its full share of work when the newspaper is finally compressed into a ball.

This exercise is much better than any spring grip apparatus can give for it gives each finger particular movements that are far more effective than hand grips or squeezing a rubber ball which was a fairly popular gripping developer some years ago.

Pinch gripping old fashioned plates, particularly those 50-pound Milos, which are about two inches thick and had no rim, is another wonderful exercise for developing the grip. One of my favorite exercises was to grasp the plate in onehand then pass it through and around my legs to the other hand and repeat this several times. I would often clean one of these heavy plates to the shoulder with one hand and several of the big boys in the gym could take a plate in each hand and clean them together to the shoulders. 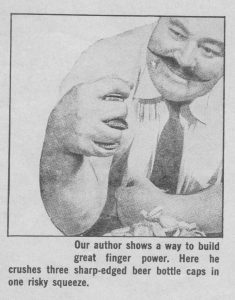 Mac would take four beer caps, place one between each of his fingers and with a mighty squeeze bend the four of them together at once.

In the old days many of the large gym had climbing ladders. Some were hung from the ceiling usually under the indoor track. One could climb along this laffer first from one rung to another then, with a slight swing, grasp every other rung. This simple feat strengthened the grip. Another type of ladder is set at an angle. Climbing up such a ladder was far more difficult and some athletes, after a great deal of practice climbed up the ladder skipping every other rung. Beside some agility this takes real gripping power.”