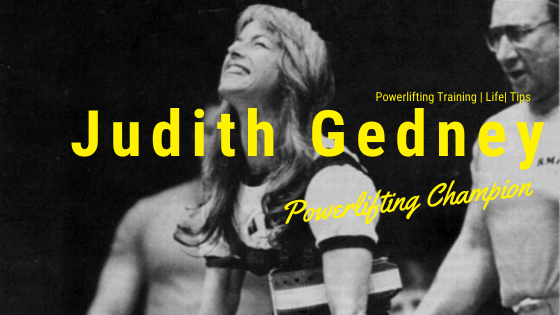 Powerlifting legend Judith M. “Judy” was the IPF Women’s World Champion in the 97lb division in the year 1986. During this time she held all the WDFPF open world records except for the deadlift, and at one time had several IPF world bench press records and the deadlift record!

Judy was born on September 26, 1940 in Chicago. She was married to Roger Gedney for decades. Roger is known as “The Great One” by the Athletes for Christ Team which he coached at the Salvation Army Gym in Macomb.

Interests besides lifting: Judy was involved in Bible studies and missionary work in Haiti, to which she and Roger travelled a couple of times a year, and they shipped approximately 300lb of clothing and other items each month. Many people they have met through powerlifting provide Haitian orphans with clothing and school tuition. This has been an added blessing not only to the Gedney’s but also to the people living in the poorest country in the Western. 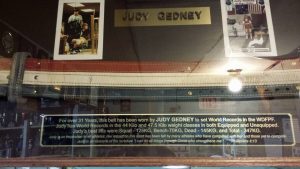 How did she started lifting? 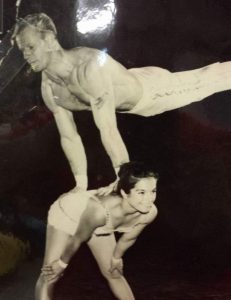 At age 39, she was in her 12th of coaching the WIU women’s gymnastics team when she first saw powerlifting. Friends Howle and Becky Sokol visited one spring. Becky was a powerlifter; when Judith saw what she was doing in her training, Judith realized that this might be just the activity her gymnasts needed to develop leg power.

Roger made up a training program for two of her gymnasts and a graduate student. She joined the training sessions as a means of learning firsthand what the gymnasts were going through.

6 weeks into training 2 of them entered a meet; during this competition they found out to her surprise that she was within 5lb of the IPF bench press World Record in the 97lb. division. Returning to the role of an athlete seemed inviting so she resigned her coaching position and they formed the Athleted For Chrsit Powerlifting Team.

She has competing since then. Although her competitive lifts are going downhill (several factors are included here, the most significant of which is the “A Factor” – Age). She knew she was blessed to be able to play the game. She was curious to see if and what she will be able to lift at age 60!

During her mid 40s, she was anticipating turning 50 with great excitement to see if she could still be training and competing; amazingly the body continues to hold up.

Diet and supplements she used 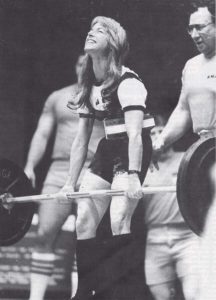 For her to keep her weight down is a major problem. She is one who would love to exist on fudge, homemade cookies, candy and coffee. Her diet is very strange.

She eats lots of vegetables and other carbohydrates. She has rice quite often. She has some fruit trees, and she has lot of fruit. According to Judy her diet is pretty boring and she doubts if very many people could stand to eat as she does.

Her frill food is popcorn without butter or oil. She may add a little sugar to it occasionally to give it a little more flavor. Supplement-wise she takes vitamnin C, calcium, and the antioxidants (E, B, A, and selenium).

She used to train each lift twice per week. In her hypertrophy phase at that time she would warm up and then do 5 sets of 10. In her 40s she dropped down to 4 sets of 10.

All of her deadlifting is done off a 4 inch box. She only deadlift off the floor at a meet. In the hypertrophy phase her training is done at a 10 rep max (training to failure is important; something you cannot do without attentive/alert spotters as well as encouragement from your training partners).

One of the problems she and her husband see in training athletes is that they do not work in the hypertrophy phase of the cycle. To be in the phase of lifting where the muscles fibers are stimulated often enough to encourage their growth, failure has to occur between the 8th and 12th reps.

People tend to just do 10 reps and stop or 5 reps and stop. This is not what Judy does. When she is doing a set, she continues until she fails. During the bench, the spotter will give a slight assist so that she can eke out another rep; in deadlifts if the rep is so difficult that it compromises her form, that’s the last rep of the set.

In squats, the spotters are attentive to bail her out when she need their help. She has never had a major injury. The injuries which she has had she has dealt with by going lighter and using high reps – as many as 20 reps. Then she has added the weight in real slowly. 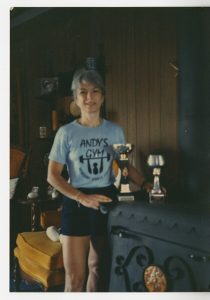 “Remember above all, that we are blessed with strong, healthy bodies which not only respond to the overload principle but additionally, this gift from God repairs aging cells as well as damage done to tissue. Train drug-free and train diligently as well as scientifically.” – Judy Gedney