Floor Press – Its History and IMPLEMENTATION 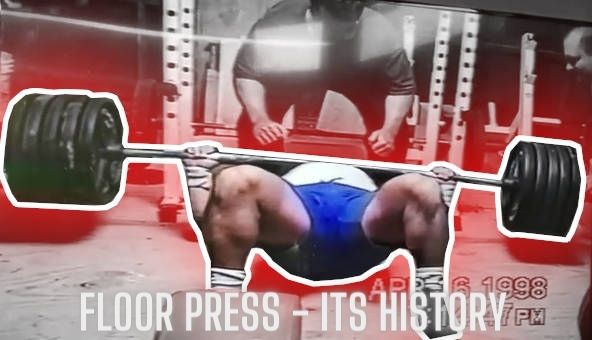 My personal history regarding the floor press began when I read about it in Louie Simmons early 1990s articles. A 1995 article by Louie published in the strength journal Milo, gives credit to Powerlifting legend Jesse Kellum for reminding Louie of how beneficial this exercise is for upper body strength gains.

I have no doubt, that as Charles Poliquin has said, nothing is new in weight training, it has all been done since the turn of the 19th Century. That being said, before commercial bench presses became a common piece of gym equipment in the 1960s, lifters were doing presses on the floor in the early 1900s. Regardless of the origin, floor presses took off after Louie Simmons programmed them in his articles as well as the video tape series he released throughout the 1990s.

Westside Barbell was synonymous with big bench pressers in the 1990s and all of their bench stars were shown in pictures or on video using the floor press to build their prodigious power. Lifters such as Kenny Patterson and George Halbert, who both held all time world records in the bench press wearing a bench press shirt, both could floor press over 600lbs raw. Lifters around the world, myself included, followed suit and did the floor press religiously in their monthly Westside bench template.

Although the floor press was programmed as a max effort exercise that was trained to a maximum single for the workout, lifters soon began to implement the max effort floor press in other manners, such as by adding accommodating resistance with bands, chains or both! The first man to total 3000lbs and bench over 900 while doing it, Donnie Thompson, wrote articles in which he programmed the floor press as a dynamic effort exercise in which he would use 50% of his maximum for 10 sets of triples done as explosively as possible- with or without chains as accommodating resistance.
As Westside evolved during the 2000s, Louie and others such as Ryan Kennelly began writing about doing more and more repetition effort exercises to build muscle mass- with the floor press being a key exercise to program for repetition effort sets.

The floor press can be performed effectively with a lifters competition grip as well as with a close grip for even more tricep emphasis. I know from personal experience, that the floor press was most effective when it was programmed for 5 sets of 5 reps after dynamic effort benches. The reason for this is because the pectorals and anterior deltoids do not fully recover 3 days after a maximum effort pressing workout, but the triceps are fully recovered. The floor press focuses on the triceps due to its limited range of motion- so it is a great exercise to do on the dynamic day which happens 72 hours after the max effort bench day.

I also know from experience that if your shoulders are sore, the floor press makes your shoulders feel great with all of that surface area to press off- as compared with benching on a 12” wide bench. When I competed in strongman and my legs took a beating from all the yoke, drag, farmers walks training- it felt great to get off my feet to build my pressing strength with the floor press. The same can be programmed for athletes like football players and wrestlers.
Today, with raw powerlifting far more popular than benching with a shirt, the floor press is even more essential because it is always trained raw.

Add the floor press to your workout program and watch your upper body power and development soar.

3 thoughts on “Floor Press – Its History and IMPLEMENTATION”