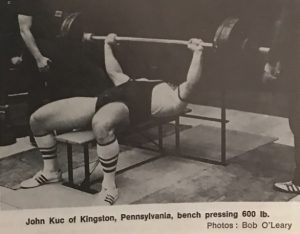 “John Kuc made some amazing…absolutely amazing progress using forced reps on his bench press..while under the tutelage of the peerless Big Jim Williams…but there is a hitch. In a miraculous period of only six months he went from handling 250-330lbs.

For forced reps to 3 sets of three with 500 to 700lbs in the movement…But from then on, no progress was obtained through his program.

He started out doing forced reps with the weight he eventually wanted to bench in legal style, and with the expert pacing of Big Jim Williams and hits own determination, John made excellent gains… Williams must have been some kind of inspiration to train with…John tells me he taped out at 65″ around the shoulders, with 24″ biceps…At his peak….probably the largest in musculature through the chest and shoulders that ever played powerlifting. 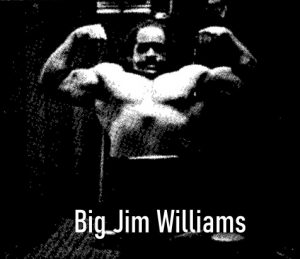 Jim got his start in Powerlifting while “Institutionalized”… Him and another guy…training outdoors in the recreation yard, kicking the drifts aside and bushing the fresh snow off the crude equipment as it fell between every rep.. John’s words stick in my mind..Training under those conditions. With that kind of devotion…and toughness..something began to happen to Jim…An incredible growth began to occur, leading eventually to an awesome American record and the ultimate prestige of being the first man to bench press 700lb IN TRAINING*…John was lucky enough to share in Jim Williams experience…as no man ever had… or ever will.

The hitch to forced reps is this…It only works for a certain amount of gain, and that’s it…After that, you can increase your forced rep poundages perhaps, but it won’t add any to your bench..I tried to explain it from the Fred Hatfield perspective…Fred used to do this “leap up in the air” thing before each deadlift..To get the stretch reflex activated. But now Fred doesn’t do it anymore.

He gets no additional fibr stimulation by this means, because..By activating those “new” fibers…Over and over again, he developed the ability to recruit them voluntarily..Through concentration and psyching-up procedures…

Perhaps the same is true for forced reps..Through  this new mode of exercise, a certain number of new muscle fibers recruited, resulting in a strength increase..but once those fibers are activated, time and again..through the forced reps, they can be controlled of other means….Additional forced reps recruit new fibers…..Thus inducing no extra stress, and gains stop.

Moral of the story….use forced reps to stimulate new growth and gains…with a good (and strong) training partner to help you in your effort…But when the gains stop, leave them alone and look for some new assistance movement….

Take aim at some other weak point in your bench, and build up some new muscle tissue and increase your overall benching ability.

*At the york barbell club”