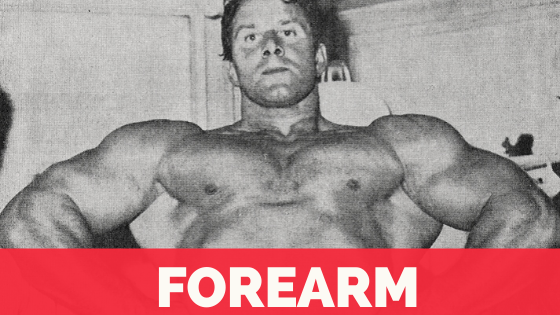 Reg Park’s forearm workout!
Without doubt the three most under-developed parts of the majority of bodybuilder’ physiques are the neck, calf and forearms.

According to Reg Park forearms are often considered to be a very difficult section to develop, but Reg personally had had little or no trouble keeping them in proportion to the rest of his physique; however even such a notable as Alan Stephen, “Mr. America 1946” openly declared that he had been compelled to specialise on his forearms as he considered them to be under par.

Exercise such as biceps curls, with barbell, dumbbell or on incline bench do affect the forearm greatly, particularly of the movements are performed correctly with the heaviest weight you can handle.

Other exercises such as upright rowing, deadlifts, and cleans are also excellent forearm developers, but if you are already performing these exercises and your forearms are still under-developed specialisation is necessary.

The most impressive looking forearms Reg Park has ever seen are possessed by John Grimek, Leo Robert and Rusty Sellars and have the effect of giving their respective physiques that rugged masculine look.

No.1 The Barbell Reverse Curl 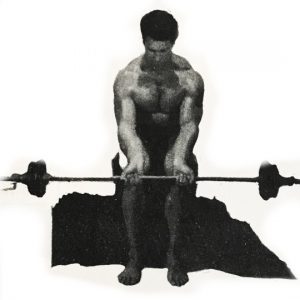 The starting position is as shown and then keeping the elbows close to the sides of the body and curl the weight to shoulder level. No body movement should be used. Perform 4 sets of 10 repetitions.

No.2. Wrist Curl with Barbell

Commence in a seated position with the backs of the wrists resting across the knees, barbell in the hands. From this position turn the wrists upwards and return to starting position. Perform 4 sets of 10 repetitions.

Hold the wrist roller with disc attached at arms length in front of the chest. With the movement of the hands only turn the roller until the cord is coiled round the roller and lower slowly to starting position. Perform this exercise until the forearms are retired.

This is simply a matter of opening and closing the grips with the strength of your hands. Perform this exercise until your forearms are really aching. 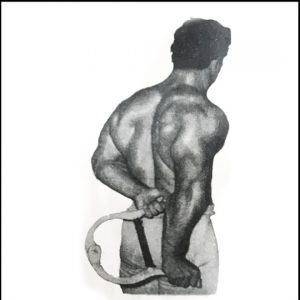 The iron shoe can also be used for forearm exercise as can be seen in the photograph. Reg Park suggested the booklet “Grip and Forearm” by Thomas Inch for more forearm exercises!