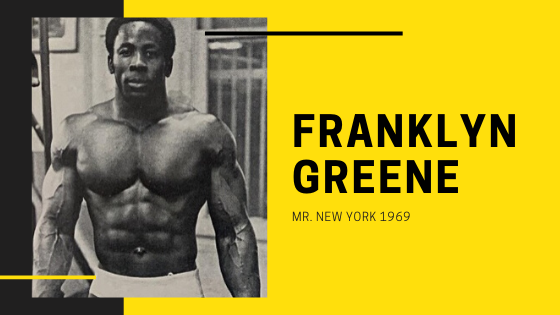 Mr. New York and Mr. World..That’s Franklyn Greene! He trained with bodybuilder from the golden era like Franco Columbo and Arnold Schwarzenegger( See the pic). In this article you’ll learn how he trained and ate! The following article was written by Howard Alpert around 1970 in IM mag. – Mr. Berg

“The newspapers tell us that there is a severe energy crisis. Yet, I know someone who seem scapable of almost being able to solve this problem singlehandedly. This unique individual simply radiates energy in everything he does. This amazing individual is the subject of this story and his name is Franklyn Greene.

From his multi-colored, star-sprangled workout suit to his bouncing step as he moves from exercise to exercise, everything that Franklyn does is charged with this abundance of energy.

I have seen his presence on a gym floor almost magically increase the tempo of training. I have seen him flash his warm smile and suddenly, guys who were just sitting around a workout area start to push out reps and sets with drive and determination. Yes, Franklyn Greene is a rare type of person and one that the field of bodybuilding is fortunate to claim for itself.

Frankly was born in Trinidad 24 years ago and it was there that he began his bodybuilding career. He was a 125 pound seventeen year-old who had very faint hopes of playing on his high school football team when he accidentally came across a picture of Leroy Colbert. Franklyn just couldn’t believe that it was possible for anyone to develop the muscles that Leory showed in the picture but he hoped that if he began weight training, he might gain enough bodyweight to be able to play football.

Football’s loss became bodybuilding’s gain. After three years of training, Franklyn was 190 pounds of solid muscle. He won the Mr. Trinidad and Mr. West Indies contests and then decided to see how he would do in the IFBB World Bodybuilding Championships (then called the Mr. World title). He placed second in the Medium Height Class. Perhaps as important, he decided that New York was the place for him and so he moved there.

Franklyn had read about the Mid-City Health Club but wasn’t quite sure what to expect when he went there. He had already met Tom Minichiello, the owner of Mid-City, who had also sponsored the World Bodybuilding Championships but the meeting had been very brief.

As Franklyn said, “I thought that Tom was a nice guy, but it wasn’t until I began to train at the Club that I really found out how great he was. I owe a great deal to him.”

I would like to add that Tom Minichiello is one of the finest gentlemen to be found in or out of bodybuilding.

His sincere dedication to to furthering the sport of bodybuilding has done much to lift it from basements and school gyms to the ABC Wide World of Sport Show on television, the pages of the prestigous Sports Illustrated magazine, and the felt Forum of Madison Square Garden in New York City.

Perhaps someday the full story of what Tom has done to help countless numbers of bodybuilders, at great personal expense, will be told. For now, let me say that any Iron Man readers in the New York City area who visit Tom and his Club, can be assured of receiving the same warm welcome that all visitors are extended.

In addition, they will find a fully, equipped bodybuilding club as well as a complete selection of protein and vitamin supplements available.

Above all, they will get a chance to meet and talk to Tom Minichiello, one of the most knowledgeable men in the bodybuilding field today, and a man who is genuinely interested in helping people. As Franklyn Greene said, “I owe a great deal to him.”

The amazing Franklyn began to amaze the other trainees at Mid-City with the intensity of his training. With Tom’s help and his own effort, Franklyn further perfected his physique and won many bodybuilding trophies during the next few years. Just a few weeks ago, he won his height class in the 1974 World Bodybuilding Championships and also won the Best Back award. When you consider that he had to beat out Bill Grant for Best Back you will realize that Franklyn Greene has become a very important figure on the bodybuilding scene.

In addition to a full-time job as Supervisor for the Effective Security System Company (this is a company that provides security patrols for office buildings), Frankly finds time to give exhibitions at schools in the New York City area and in Trinidad to interest youngsters in weight training. He also donates two trophies each year to the government of Trinidad to be given as Sportman of the Year awards to outstanding athletes.

Franklyn’s training routine is one that should be attempted only be the really advanced trainee. Others should certainly cut the number of sets by half. He works on a split routine and works each body part twice a week. Franklyn alternates sets with his training partner, Courtne Brown, and all sets after the warm up are done to exhaustion.Repetitions are kept from 6-12

Abdominal work is done only for 6-8 weeks before a contest. Then, Franklyn will do about twenty minutes of continuous sit ups and leg raises.

Franklyn eats about six times a day. He consumes three regular meals and three protein drinks made of pineapple juice and a milk and egg protein powder. A typical day’s menu would consist of the following:

Supper:
One pound of chicken or fish, a mixed salad, fresh vegetables, a glass of orange juice, and fresh fruit.

The protein of chicken or fish, a mixed salad, fresh vegetables, a glass of orange juice, and fresh fruit.

The protein drinks are taken about two hours after each meal. In addition, Franklyn, takes the following supplements daily: 4000 mg. of vitamin C, 400 units of vitamin E, 40 liver tablets, and a multi-mineral tablet.

About four weeks before a contest, Franklyn will cut out almost all of the carbohydrates and the protein drinks and will weight about 205 pounds of rockhard, defined muscles. As you can see from the photographs, this 205 pounds is symmetrically distributed over his 5’10” frame to fill it out with a 49″ chest, 29″ waist, 19″ arms, 26 1/2″ thighs, and 17 1/2″ calves.

Franklyn’s view on steroids
He tried them twice before contests a few years back. He did this because he had been told they would help him to retain size as he cut back on his eating. Franklyn said that the results were very negative both times.

He simply smoothed out and also lost size. This year he didn’t touch any steroids and entered in the best condition of his life and, as reported before, won his height class and the Best Back award.

Franklyn feels very strongly that steroids are completely unnecessary and probably detrimental to a bodybuilder. He will never try them again.”