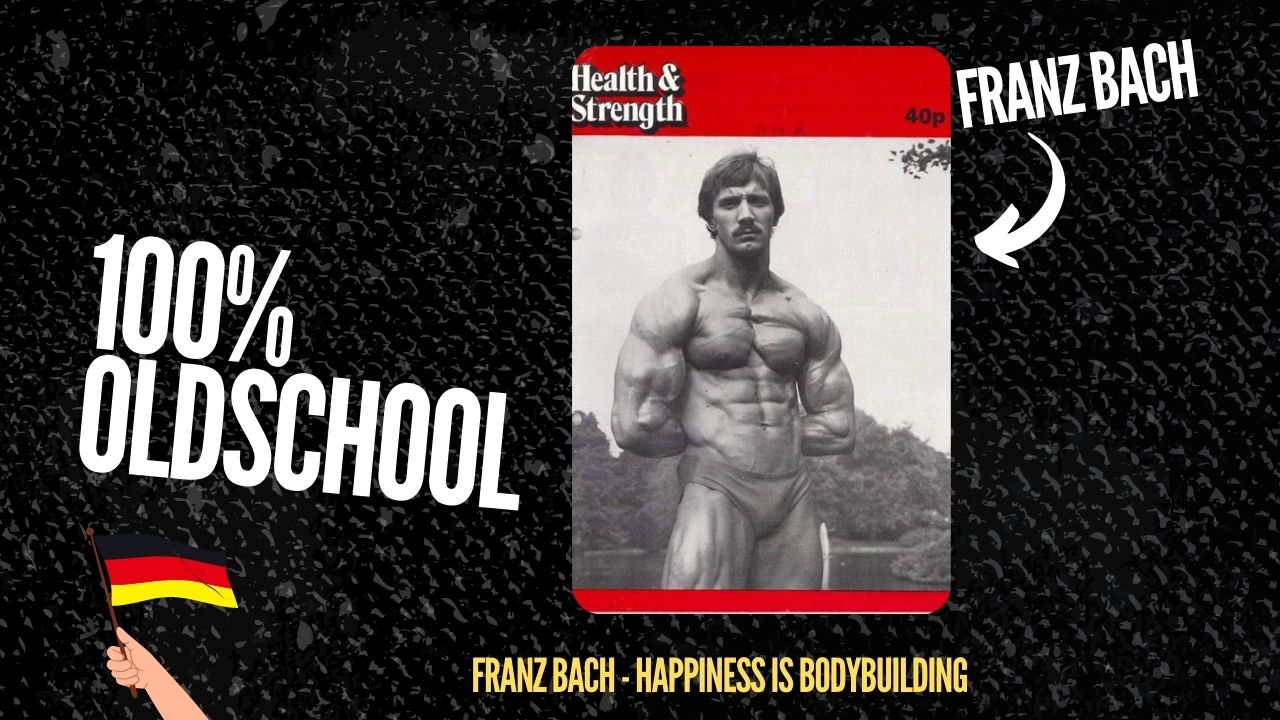 Franz Bach won the title of “Mr. Germany” in 1981 but to him, having a real-life job and working 12 hours a day was more important than bodybuilding. He was truly a hard-working German.

Recently, I watched an emotional interview with Franz Bach at the Loaded Cup competition in 2015. The interviewer Matthias Botthof asked him, “I saw your posing routine onstage. The audience was enthusiastic. Is that the motivation that drives you?”

“It has a different background. I had three hearts attacks. I had my heart surgery last year. It is a psychological burden. For me, bodybuilding is a comeback for my soul,” Franz Bach answered as he fought back tears.

Matthias handled that situation very well and calmed him down with the following words: “Those are the important things in life, the tough times that you never saw when you were young. When you get older, you can overcome those things. What matters is fighting back against life. It’s not about trophies or victories. It’s about the meaning of life.”

Since 1986, Franz is no longer a competitive bodybuilder. At the age of 42, he took third place in a German championship. At the age of 53, he participated again in the same competition and took fourth place.

Franz explained his retirement from competing as follows: “The problem is, I have to care about my real-life job, and the priority was just the job. Bodybuilding was simply just for fun, but I never stopped bodybuilding. “

Franz trained with the legendary German giant Markus Ruhl in his gym. Franz said, “I lived on the same street as Markus. I was cleaning my car topless, and Markus was seven years old and saw me, and he said to his mother, ‘I want to look like him.’”

Franz is proud to have been a role model for Markus. At the age of 56, he trained like he did in his early days. Unfortunately, at that age, he had his first heart attack.

In his rehabilitation phase, his passion for bodybuilding was the same as before. Franz said, “I train six times a week. In the past, I trained more. For me, it is important that I am slightly overtrained. This gives me satisfaction. Slight over-acidification in the muscles is important.”

Franz’s opinion about the training splits of today: “It’s more effective, but we did not know better. We trained four hours a day. We also trained twice a day. It was all nonsense. We also did not pay attention to the recovery phase. Cardio training was also not important for us. Nutrition is 70%. The diet has not changed in the last decades. In my time, I lived a low-carb lifestyle, almost carb-free. I used keto sticks, which are used by diabetics. That means when the body consumes ketones, it burns fat. I used keto sticks and withdrew carbs until the keto sticks turned color. Then I knew I was in ketones range, and I could increase my carbs. Nowadays, there are carb-free diets. Back then, we were trying to achieve a protein overload, a fat deficit, and no carbs. The body was forced to convert carbs into energy/glycogen. I have a similar situation as Markus Rühl. He eats turkey, rice, and chicken, but I have a problem with that. I’ve been limiting myself to red meat. I’ve been eating more beef. Turkey, top leg. 90% of my diet was fish and beef.”

“When I was in America for the first time in 1980 and came to the World Gym, it was like reading the Flex magazine for me. I saw Arnold, standing at the front desk. Ed Giuliani, former Mr America, he was the gym manager. He was sitting behind the counter. I thought to myself, ‘What should I do now?! There’s Arnold!’ I spontaneously went over and said in German, ‘Hello, Arnold, I am Franz Bach from Germany. I don’t want to disturb you. I don’t know any English. Can you ask the manager what it costs per month?’ Arnold asked him and Ed Giuliani said it would cost $40. I agreed to that. Then the next day, I went to the gym and trained. I talked to a guy named Big Tony.”

In Pumping Iron, there is a scene where Arnold greets him. Tony could also speak German, but Franz Bach tried to speak English anyway. Arnold noticed that and said, ‘I thought you didn’t know English.’

Franz said to him, “Arnold, that’s how you meet people.”

Franz goes on to say, “Arnold also saw me doing squats with Tony, then Arnold joined in. That was preparation for his last Mr Olympia competition, and so we trained together for weeks. It was a great atmosphere, and I was happy to meet Arnold. In 1983, when I became Vice World Champion in Germany, Arnold was there and handed over the trophies. After the competition, I was on the way to my car, and there was a note on the windshield that read, ‘All the best for the future. You looked great..’ It was signed by Arnold Schwarzenegger. I had posters of Arnold with his signature; I thought someone was messing with me, but the signature was real.”

Bodybuilding: Present vs. Past (2)

Franz toured through Germany to hold seminars. A fan asked him about his relationship with the other athletes.

Franz answered as follows: “Bodybuilding was not as commercial as it is today. I was in Paris for six weeks and trained with Serge Nubret. I went to lunch with him every day. Sammir Bannout was preparing for the Mr. Olympia competition. He was with us at the Athletenschmied gym in Munich. He slept in the studio. Erwin Knoller, titleholder of Mr. Germany 1981, cooked breakfast for us. I went to the studio in the morning, and Erwin asked me if I was hungry. Then we had breakfast together. We had a great camaraderie at the Athletenschmied. Achim Albrecht also trained there, and Ray Mentzer.”

There’s a great German documentary about Franz Bach’s bodybuilding career. It was published in 1983 by the German network BR. The documentary is available on Team-Andro.com and obtained 50.000 views. In the documentary, Franz is 28 years old and owns a gym in Darmstadt, Germany.

A user of Team-Andro.com left a quite interesting comment about that gym: “I was at the opening of Franz Bach’s studio at the main train station in Darmstadt. I started there as a scrawny asparagus. I was also there when Hauck trained with Franz; it was a big show. It was still a bodybuilding studio, not a wellness center. Franz is authentic; he even cried sometimes when you did him a favor. Sometimes, you had to know when to get out of his way, when he was in a bad mood or on a diet. The whole atmosphere in the studio was quite competitive, and people sometimes put each other down. ‘Man, you look like shit again today; are you eating like crap again?’ But seeing the little Spaniard and Schmidt doing squats with 170 kg was quite a show back then. I’m glad that Franz is still building and in decent shape—despite the heart attacks. I learned a lot about my body and food during that time.”

There’s scene of Franz sitting in his living room, eating rice and watching TV. His wife cooked for him. It is a very traditional relationship.

In the next scene, he told the following anecdote:

“I was at the public swimming pool in my village. Seven soccer players were sitting at the table. I just wanted to get a Fanta. I went to the vending machine and got a bottle. The footballers made fun of me. They made stupid comments about my muscular appearance. I looked over. There were seven people sitting there. Any normal person would have thought that was too many men. I didn’t say anything and saw a woman sitting there, and I thought, ‘You must do something.’ I waited until the woman was gone. Then I went to the table. I turned the table over. I took two of them and knocked them out and sent the rest home.”

In the documentary, Franz Bach sits with his parents in the living room. They are talking about bodybuilding and money, and they are looking at old pictures of Franz.

“If I played soccer with the same intensity as bodybuilding, I would be big in business, but I don’t do bodybuilding out of commercial interest…”

Franz started to talk about steroids:

“Everyone is using it; the chemical tool is just like in any other kind of sport. Everyone onstage has their chemical tricks, whether it’s a state or city championship.”

He talked very openly about steroids on German television and was banned for it. The ban was a decade long, but through a friend named Walter Klock, the ban was removed early.

Franz Bach’s Facebook page says that he passed away on January 23, 2019, at the age of 65. The cause of his death is unknown.