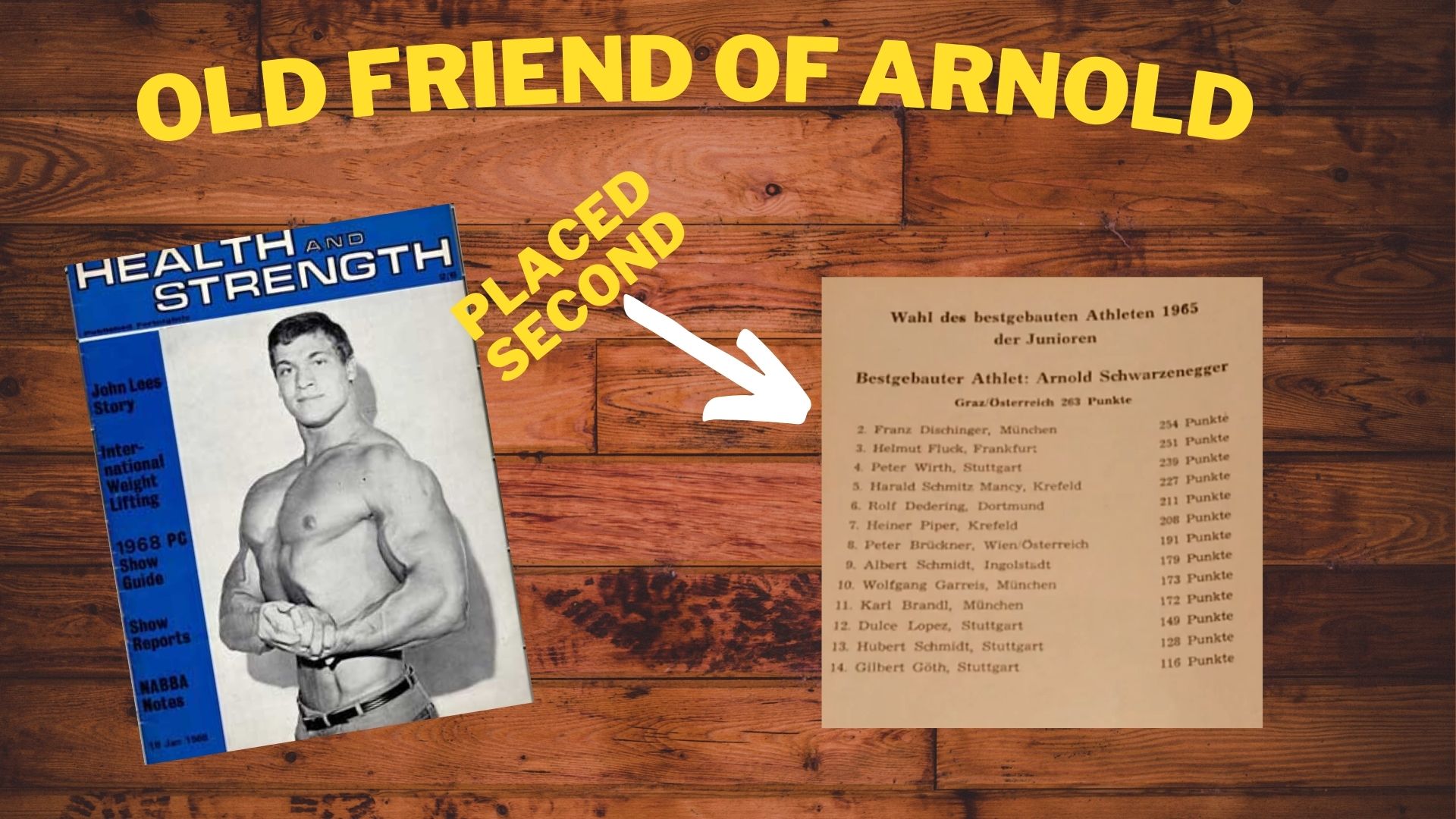 Schwarzenegger’s bodybuilding career began in Munich, Germany. In his native Graz, Austria, he had been able to train, but bodybuilding was poorly respected. Few companies, no sponsors and the possibility to work as a fitness trainer was almost non-existent.

Munich was the Mecca of bodybuilding. The gyms were well equipped, competitions were held professionally and the profession of fitness trainer was established there. In Munich, Schwarzenegger took many bodybuilders to his heart, and famously became close friends with Franco Columbo. Both trained together in Munich and emigrated to the U.S. to continue their training sessions.

During my research, I became aware of this Instagram picture, which was published by “arnoldrarepics”. The photo shows Schwarzenegger, the winner of the competition “Best Built Athlete”. On the left side you see Dischinger, who made second place with 254 points.

The photo obtained an incredible number of likes of 1,959…but who is Franz Dischinger? I googled and searched the whole internet for any information about him, but found nothing.

I looked through my German magazine collection to research some stuff about the guy. So, fortunately, I own two German magazines (Vita Sport Number 2 and Sport Revue Number 112) that document Dischinger’s career and life.

Mr. Dischinger seemed to belong to the famous “Munich’s Bodybuilding Gang”. He trained with Schwarzenegger, Columbo and Reinhard Smolana.

Today’s bodybuilders are wearing head-phones and are self-centered, but not the guys from the Golden Era. There were no enemies, they all pursued the same goal: to have as much fun as possible and build muscle mass.

Dischinger was born near Passau, Germany. His brother was a passionate and successful weightlifter. Franz wanted to emulate and surpass him, so he picked up the barbell very early and trained for strength.

As a young lad, he couldn’t train in the gym, so he built his first training apparatus himself. Joe Weider, Bob Peoples and Paul Anderson were all successful athletes and set records. They also built their training equipment with primitive tools!

Dischinger built his dumbbells out of concrete, he carpentered the benches himself and he had the fitness instructions from the magazine “Sport Revue”.

In 1964 he took part in the Mr. Germany election, and in September 1964 he went to Munich, the Mecca of bodybuilding. There, the famous “Kraft Sport Revue” magazing was printed, which Schwarzenegger was also a fan of and read with pleasure.

Dischinger trained in the famous gym of Reinhard Smolana. Mr. Smolana recognized the talent and promoted him.

In 1965 he participated in the “Best Built Athlete” competition. At first, he was the jury’s favorite, eventually Schwarzenegger won first place. A close friendship developed.

Schwarzenegger and Dischinger were known in Munich for their pranks and jokes. In 1967 Dischinger won the title of “Mr Germany Junior”. He continued to train diligently and built up muscle mass. But he had not only bodybuilding in mind, and had fallen in love with a French girl. He stopped bodybuilding for two years and lived in France during that time.

According to the German magazine “Sport Revue”, he lost 20 kilos of body weight, graduated from school and studied business administration. He then worked as a fitness trainer in the “Universum Studio”.

The gym had only 80 active members, but Dischinger was hardworking and business-minded. The number of members had increased to 330 within 6 months. Dischinger developed problems with the owner of that gym and gave up the job.

Today, Dischinger has completely forgotten the sport and no longer has a connection to the world of bodybuilding.

Unfortunately, I haven’t found a magazine that documents Dischinger’s training. If someone knows how Dischinger trained, please leave a comment or message me. My email address is: neckbergcom@yahoo.com