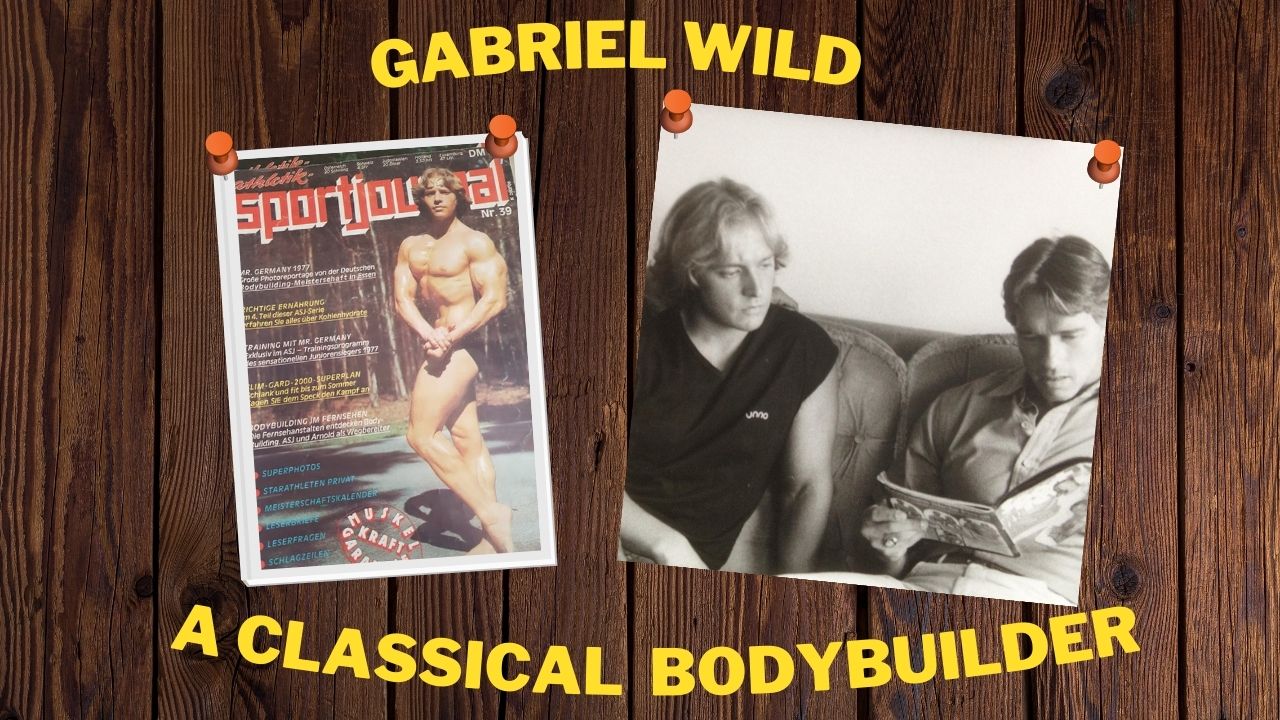 Gabriel Wild is truly a fan of the classics. As a teenager, he avidly read and studied books by the German-Swiss author, Hermann Hesse. His passion for classical music such as Beethoven, Wild proved it by underlaying it with his posing routine. In the 70s and 80s the blond german bodybuilder was truly a star.

Even Schwarzenegger is familiar with the family of Wild and not at all a stranger! Wild’s father was an academic Sculptor. His sculptures are in famous Munich theaters, one in Santiago, Chile and one in Schwarzenegger’s estate.

Wild: “The photo at the bottom left is my father. He sculpted me, but didn’t finish it because he developed psychological problems. After 5 years, he tragically died.

The meeting with Schwarzenegger was at my home, with Albert Busek and so on. My father took the photos of Arnold, from behind and in front, to sculpture his head. My father also made the winning medal for the Mr. Olympia.”

Both sculpting and bodybuilding share a common passion for shaping and creating. Mr. Wild owes a lot to his father, including the love for art and self-expression.

Growing up in the Czech Republic, Gabriel Wild loved going to theaters and cinemas in the earlier 1960s. In his native Czech Republic, the movie “Romulus and Remus” starring the legendary American bodybuilding star “Steve Reeves” was shown. Fascinated by the muscular appearance, Wild’s desire and interest in physical culture began very early.

To the suffering of Wild, bodybuilding was unknown in the Czech Republic and training facilities were rare. This would change a little later in 1969, as the Wild family emigrated to Munich, Germany.

As everyone knows, Munich was the bodybuilding stronghold. There, the famous magazine “Kraft Sport Revue” was printed and celebrities like Schwarzenegger, Columbo, and Dischinger trained.

In June, 1973, the career of the 16 year old Wild would finally take its course. He trained in the sports studio “Universum Sport Verlag” (Blumenstreet 7) and according to all appearances, the sports studio was the headquarters of the magazine “Kraft Sport Revue”! It had both a gym and a film studio.

Wild fell in love with the iron and the training atmosphere there was unique. “We just trained hard, no high-tech, it has to be in your mind.”

Also, he studied the technical literature of the big Bodybuilding stars and would gain 10 kilos after just a year of training!

Wild: “Three years ago, I was a line in the landscape and naturally above average only in my legs. I took Larry Scott as a role model because I have a similar body structure and he is also about the same size as me. He’s the one I can most closely identify with.”

Antonio Trovato, as one of Munich’s most successful bodybuilders at the time, finally persuaded the 16-year-old to participate in the 1974 Mr. Bavaria contest, where he placed 5th.

He never lost sight of his schooling, and eventually became a laboratory technician. Wild was busy, and there wasn’t much energy left for training. However, quitting was never an option!

Wild: “Without training, I wouldn’t be able to take it anymore. And the championships are the strongest motivation for me to train hard and regularly.”

In 1975, Mr. Wild successfully graduated and was finally able to train hard again. He took third place in the Mr. Germany election.

In 1983, a dream came true: his own commercial gym. Gabriel Wild made a name for himself in Munich and even bodybuilding stars like Mike Mentzer, Samir Bannout, and Jeff King sought the Wild’s Sport Studio to train and philosophize about bodybuilding.

10 weeks before the competition

Tea or coffee without sugar,

protein drink with about 80gr protein

protein drink with about 50gr protein

Bench press was the first exercise. He did 5 chest exercises, 5 sets, and 12 reps each.

Wild: “I’ve found that the exercise gains considerable effectiveness with the movement as vertical as possible. The dumbbell should not move forward or backward to keep the chest muscles in tension at all times.”

This exercise is performed on the chest machine, thus guaranteeing a vertical movement.

Wild: “For lateral and internal chest separation, I did close bench press and flying movement in the superset. I grasp so tightly that the thumbs almost touch each other.”

Pull-ups: grip very wide and lower body all the way down.

Lat pulldown: only with light weights.