Gennady Ivanchenko takes pride in the fact that he comes from Gzhatsk, the small Russian town where Yuri Gargarin, the first man in space, was born. He went to the same school as the famous cosmonaut did. More, Gennady’s father was principal of that school, and his mother taught there for many years.

Need it be said that Yuri Gagarin is one of Gennady’s heroes?

Gennady’s first independent step in life was to leave Gzhatsk. Lured by the idea of travelling to distant lands, he went to Riga, capital of Latvia, to enter the nautical school there and become a seaman.

Long before that Gennady had started working with heavy dumbbells. He read everything he could lay hands on about Ivan Poddubny, the great Russian strongman. His father, of course, noticed that the boy was trying hard to build up the not very strong body with which nature had endowed him.

The dumbbells were followed by a homemade barbell, and when Gennady came before the medical commission at the Riga Nautical School his physique was everything one could desire. But to his great disappointment his eyesight was not up the standard required of a seaman.

Before returning to Gzhatsk Gennady dropped into a Riga gym. Coach Mikhail Freifeld asked him, as he did all the other novices, to show what he could do. An experienced coach, Freifeld was struck by the lad’s style in lifting the barbell.

Gennady walked up to it slowly, as though unwillingly, bent over slowly, gripped the bar and then in a flash raised it above his head. He walked away from the barbell as unhurriedly as he approached it.

To make a long story short, Gennady remained in Riga and began to train under Mikhail Freifeld. And before long he began to register performances he had never dreamed of.

Gennady’s first record and also the succeeding one all have the same foundation: an inexhaustible capacity for work and a conscientious approach from start to finish. 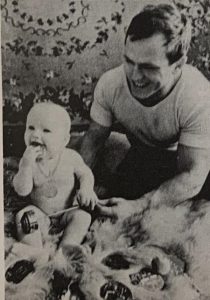 He carries over his conscientious attitude to his private life, which is austere but not ascetic, and to his relations with friends. He invariably finds a common language with the people he meets.

Gennady’s training sessions are always purposeful and subordinated to a well-thought-out system. This was what helped him, at the national championships of 1970, to become the first lightheavyweight in the world to lift a total of 500kg (1102lb), or half a metric ton.

Since then, he has never performed below that level. He won the European crown and in Columbus in the United States, he captured the world title, breaking his own records.

In a keenly contested tournament at summer’s National Games he won another gold medal. The only major award he lacked at this time was an Olympic Gold medal, and he has setted his sights on winning one in Munich.

For the sake of that he did not compete in the last world championships. An old arm injury was troubling him and he was afraid to risk straining the arm again.

In Gennady’s sports diary there is an entry that reads:” What we become depends on ourselves” As he sees it, the meaning of these words extends to the whole of life, and and not just to sport.

He used to study at an institute, was learning English, took an interest in music and read a lot, especially Jack London, whose courageous characters appealed to him.

He won the Soviet and European titles in 1970–1971 and the world title in 1970. Between 1969 and 1972 he set eight ratified world records. His 1972 record in press was never broken, as that event was discontinued the same year. Ivanchenko was left out of the 1972 Olympic team due to a fever. He retired in 1979 to become a weightlifting coach
source:
Sport in the USSR by N. Formichev