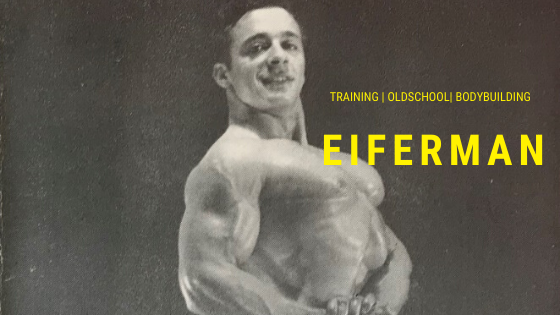 Note: he used this routine 3 times a week and would rest 2-3 minutes in between sets.

He practiced the bench press every workout. Since the first time he performed the benchpress, he has never taken a workout in which it wasn’t used and he sincerely felt that it has done more his upper torso than any other movement. He felt he owed 99% of his chest development to the practice of benchpress.

He preferred the standard movement performed on a flat bench. He regularly used incline bench dumbbell and barbell presses in his workouts. They should not be neglected.

He used the wide grip. He has found the bench press spreads and deepens the entire rib box, raises the chest high and full and promotes a terrific development of the pectoral muscles.

He used wide grip but sometimes also close grip. The wide grip get outer head of the pectorals while acloser grip influences the triceps and deltoids as well as the central portion of the pectoral muscles.

Dumbbell bench presses are excellent too, particularly if you drop the dumbbells as lowe as possible below the line of the chest. This version stretches the pectorals tremendously and “pumps” them up.

Can be done either on a flat bench or on an incline bench.He recommended that the workout includes all types of bench presses both with barbell and dumbbells

Reps/Sets:
Reps not over 8 and sets up to 5 = bulk and power
High reps and sets = build endurance, definition

Bench press stimulates growth because of the heart and lung stimulation. Squats, deadlifts, heavy cleans from a hang position and other similiar movements are also growth exercises.

“The orthodox bench press is the King of all upper body exercises, those that develop the ‘foundations of Power’ and build muscle form seen only the world’s strongest and best developed men.

My first reaction to the bench press was one of chest, arm and deltoid fullness. It gave me a feeling of massiveness that curls and standing laterals and presses in standing position had never done. As I looked into a mirror after my first of bench presses, I knew I had at last found my ideal Upper Trunk exercises, for my whole upper physique appeared thicker and more muscular and ever sice that days. I have been sold on the merits of bench pressing”

Edior’s note: Use the below tag-system and click the button “benchpress” or “Mr. America” for more informations and articles developed by champions! – Mr. Berg