George Pickett: Heavyweight on his way! 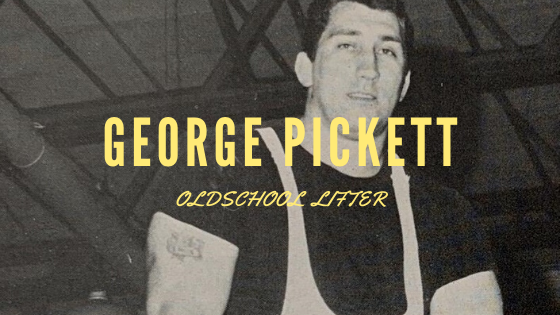 George “Big Ernie” Pickett, the 29-year-old behemoth from Baltimore, Maryland, is causing heavyweights around the country to sit up and take notice. His improvement in the last few months indicate that he will certainly be a top contender for national honors in upcoming years. There has been considerable debate throughout lifting circles concerning the height of this jovial giant. He is 6’4 1/2″, according to his own measurements, and currently weighs 285 pounds. His best lifts to date, are: 375 press, 310 snatch, 410 clean and jerk. On the powerlifts he has made a 440 bench press, 540 squat, 675 deadlift, and a 400 push press. 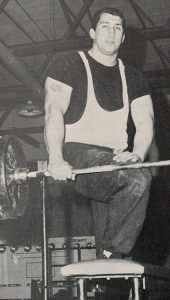 He began lifting at the unusually late age of 22, but contends that he believes this to be an asset rather than a handicap. He states that when one has matured enough then he is ready to settle down and begin serious training. At a younger age he would not have been able to do so, he asserts. His bodyweight was 185 pounds – exactly 100 pounds less than it is today – when he first began lifting.

His initial attempts at pushing the iron did not demonstrate any unusual ability in the sport. After two weeks of training he could claim a 115 pound press, and a 160 pound jerk for 2 reps. His first routine consisted of three workouts each week and included such basic exercises as: bench presses, overhead presses, curls, squats, power cleans, pullovers and flying exercises. Several sets of each movement were performed, beginning with 10 reps, and advancing the weight each set for less reps. until a maximum single effort was achieved. George still feels that this type of schedule is admirably suited to novice lifters.

In 1961, after 1 1/2 years of training, he felt that he was ready for his first novice meet. He was highly touted to win. A first attempt press with 205 went easily, but was ruled out for toe raising. He was persuaded to advance to 215 and failed twice with this weight. This proved to be a very valuable experience and since then, he had always been very cautious in his selection of poundage’s.

In 1962, he again entered the novice meet and made an 800 total to win the class and the Best Lifter award. This same year he won the South Atlantic Championship with an improved 830 total. Encouraged y these successes he decided to try the “Open” competition. Here he found that the best that he could achieve was a 4th or 5th place.

Adding to the frustration was the fact that he saw his competitors warming up for the press as he prepared for the stanch. He made a vow, then and there, that he would be with them in due time. With this end in mind he utilized all kinds of training methods, but he attributes his progress from 800-900 to work on the isometric rack. George commented that the one most important factor contributing to his progress has been the encouragement and advice given him by Bill Andrews, his training partner. Bill has helped him set up programs and is always there, both in the workout room and the platform, to spur him on to greater goals.

On the day that he first passed the 900 pound mark at Barnegat, New Jersey, Bob Hoffman exhorted. “Good show, George. But now let us see 1000 pounds!” So, his sights were now set on his next goal. This was in 1964. It should be noted that his progress in ’64 was seriously hampered following a double fracture of his right ankle. The Doctor, on being asked how this would affect George’s weight lifting retorted, “He will be lucky to be walking.” After the cast was removed, the ankle would swell each day. George, not to be denied his objective so easily, forced himself through a program of heavy squats and other exercises.

He found that instead of exacerbating the symptoms, the exercising greatly relieved them. Thus encouraged, he gradually built up the volume of his training.

In the Baltimore Open Meet of October, 1965, the thousand pound barrier was first broken, via a 340 press, a 285 snatch, and a 375 clean and jerk. On a trip to York shortly after this achievement he asked Bob Hoffman what total would earn him a place on the 1968 Olympic Team. Bob advised him to set his sights on 1200 pounds, to gain weight, and to change from split snatching to the squat style. This he did and the results have been gratifying. After switching to the squat style he has improved his snatch 40 pounds.

he has been gradually increasing his bodyweight, utilizing Protein-honey-peanut butter mixture, plus a diet which is high in protein.

Without the aid of a coach, he has, out of necessity, had to resort to poring over magazines, soliciting information from top lifters and officials, and taking the occasional inspirational weekend trip to York.

He contends that he combines the best of many programs to meet his individual needs.

In training, George believes that schedules should be organized for the individual’s needs and weaknesses and, consequently, is very flexible in his approach. He changes his routines periodically to meet the demands as he sees them. He has found that by following a rigorous program almost to the point of over-training, then cutting back the routine to rack work exclusively one week before a major contest results in higher totals.

Big George is presently employed as a machinist at the Continental Can Company in Baltimore. When asked if he had any hobbies he answered: “When I decided that I wanted to reach the top in weight lifting I gave up all other outside interests.

Before that time I was interested in many other athletics and in drag racing.” His most immediate goal is to capture the 1966 Junior National Title. He feels that if he can continue improving as he has in the last few years that he can be a contender for the heavyweight spot on the 1968 Olympic squad. He plans to go on up in bodyweight and feels that this will be a definite asset to his lifting.

Below is the training program which he followed to raise his total from 900 to 1000. 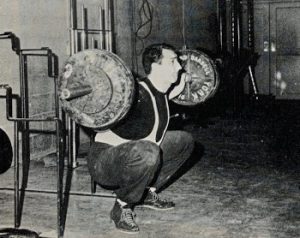 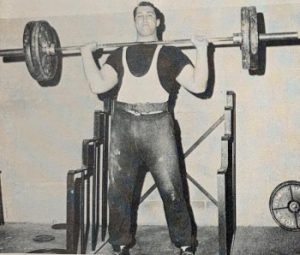 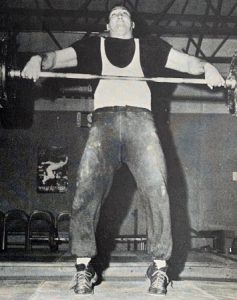 Saturday: 80-85% of limit. He tries to go to as many contests as possible, so this often takes the place of his Saturday workouts.

In concluding this brief sketch of this personable athlete I believe that a quote from his training mate and close friend, Bill Andrews, is very appropriate.

“I feel that this untapped potential is terrific and that he is the strongest all-around man that I have ever met.”

note:
all photos by tommy suggs,
text by John Terpak