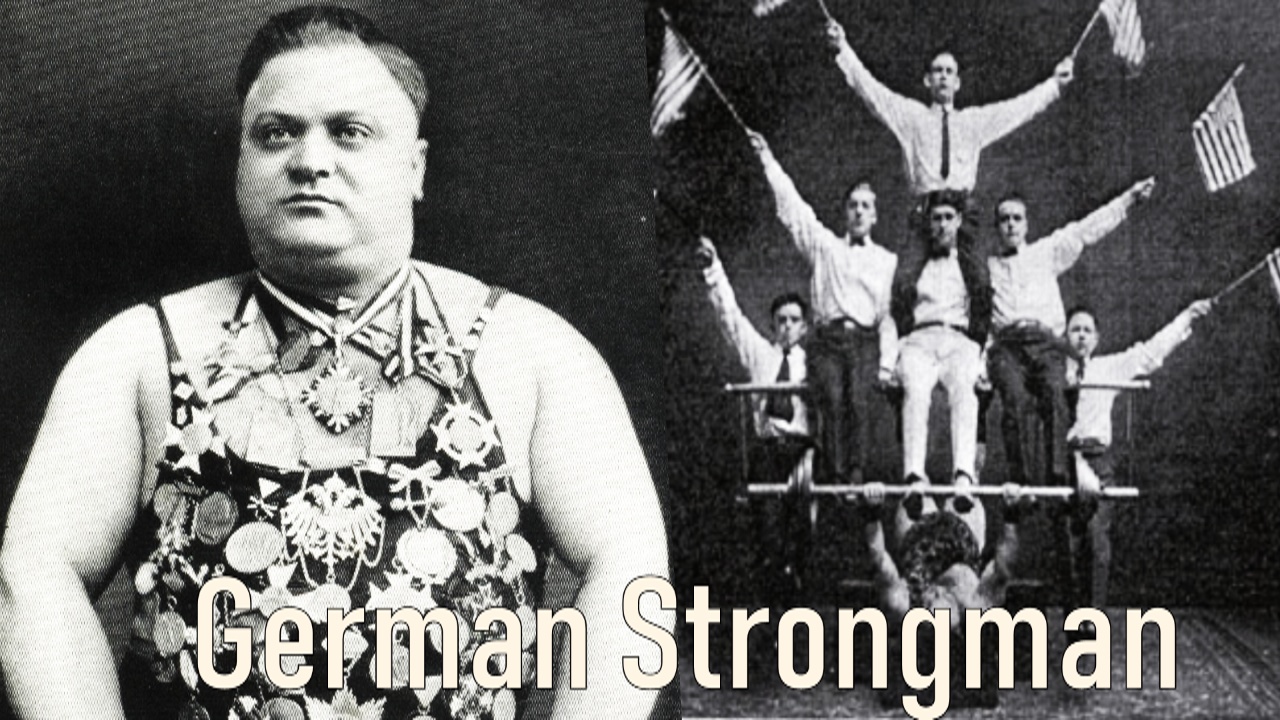 Karl Moerke was born in Köln, Cologne, Germany in 1893. As a boy he was always fat or rolly polley in type and did not fair so well at the formal heavy gymnastics of the German boy’s physical education. But what he lacked in grace he made up in power.

His father and mother were stronger than average. An older brother training with weights, was his inspiration. Not having money to buy weights, he secured lead pipes and train bumpers from the railroad yards. Bumpers are disc shape in Germany and make fairly good barbell plates.
He was 14 years old when he started training, and was able to press 60lb. with one hand. For two years he did nothing but bodybuilding exercises. Then he changed to a program of lifts, working out daily and trying for records once a week. His overweight condition permitted such a routine. The training group became the Stemim Iche, or Oke Weightlifting Club.

The city of Cologne had a policy of erecting a building for any sizeable group of Athletes that showed promise. Men over 18 years of age paid 50c per month and boys paid nothing. At 16 Moerke won the city championship. Then he challenged all comers.

He did not serve in the first World War but worked in the railroad yards since he was a graduate of the railroad Technical School. In 1920 he won the Olympic Championship in Vienna. Steinborn was on the team with him but had not reached his prime. When Swoboda saw Karl he walked away laughing, remarking to by standers that he had thought Moerke was a big man. At that time his weight was 195; height 5′ 2″. 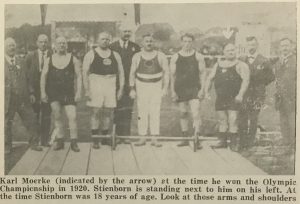 Before this while still 17 years old Karl had won the Rheinland and Wespahliu Championships. After winning the Olympic title he turned professional and came to the United States in search of a stage contract. Knowing the success of other strong men and the enthusiasm the people of this country had for athletics, he expected to be a great success. But he was doomed to disappointment. The United States enthusiasm for athletics did not include weight lifting. In vaudeville the strong man era had passed. Moerke refused to do anything crooked. An honest feat of strength is not always spectacular. His physical stature was against him. Americans care more about how a man looks than what he can do. On the day of his arrival in the United States, he was met by a committee and escorted to Herman’s Gymnasium where he gave his first exhibition in this country. The committee including such men as C.A. Ramsey, Mark Berry, Arden Schmidt and Prof. Herman. After that he gave several open air demonstartions hoping to get a booking. In Hoboken, N.J. he lifted the front of a fire engine high enough for the wheels to be spun, with his feet.

Finally his break came. He was given a trial in the Poli Theatre in Bridgeport, Conn., with the offer of a 34 week contract if he made good. They squeezed in his huge stomach with a special made corset which restricted his movement. One of his feats was the supporting of ten men while lying on his back with a girl doing a hand stand on a heigh bar. The girl stepped on his testicules causing severe pain. She kiped into a handstand instead of pressing up casuing the whole thing to rock dangerously. But in spite of it all he held the weight. The audience howled and jeered, so he lost the booking. 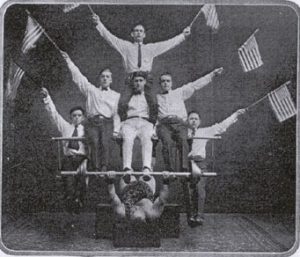 Soon after he placed his act in a small carnival in Savin Rock, a small resort in West Haven, outside New Haven. Ninteen shows a day were required in each act. He continually pressed 250 lb. ten times, deep knee bend with 500 lb. pressed a model T ford with his feet and did a back lift with ten men. He would walk up to a six-footer weighing 250lb and hoist him up on to the back lifting platform as easily as lifting a baby into a perambulator.

He married the girl who appeared in the act with him in the Bridgeport theatre. She had a job in the carnival getting out of knots after being tied by a member of the audience. He did not receive very big pay. When the carnival closed at the end of the summer, he was flat broke. His wife left him and he had to sweep the New Haven streets for a living. A friend placed him in a concrete company where he was able to save some money.

A cablegram came to him telling of his father’s being near death. Then he returned to Germany very discouraged. His measurements taken at a body weight of 245 were, neck, 19in., arm 18 1/2 in., chest 48 in., waist unknown but large thighs 33 in. calf 19 1/1 in. Some of his lifts were, two arm military press 265 with ankles together, two arm continental press 350; two hand continental jerk 386 (official), unofficial 405; deep knee bend bounce style 650; dead lift 650; and a one arm snatch with little finger only wrapped around bar, 160lb.

Moerke was a very heavy eater but unlike most Europeans, he drank no alcoholics. A favorite drink of his was sugar and water. He would say, “Sugar gives strength which leads to championships.” He ate an 8lb ham, a loaf of pumpernickle bread, a head of cabbage, a gallon of coffee. Next door to the circus tent in Savin Rock was an open air restaurant. A crowd gathered daily to see him eat.

On returning to Germany he was very sucessful with a small motorized circus of his own. He toured Germany, Poland and Sotuh Russia.