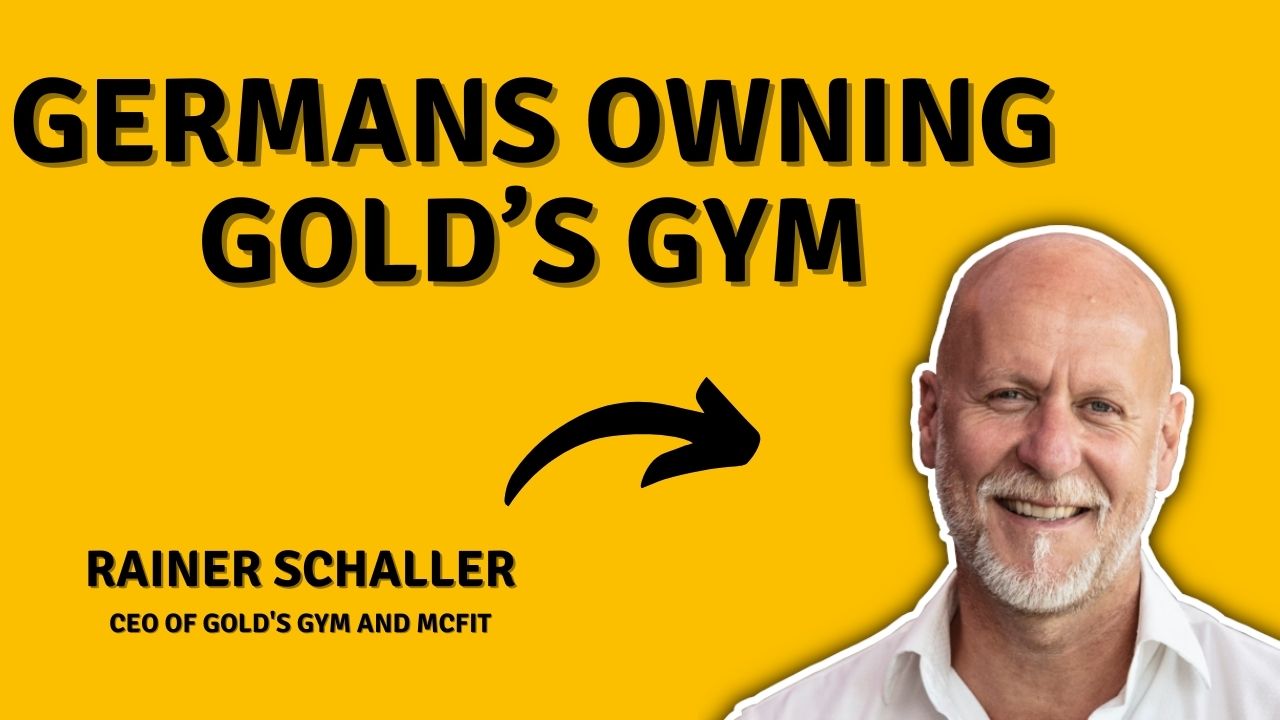 He may not have millions of followers on Instagram, but millions of Germans are members of his gym franchise called McFit. Rainer Schaller is a big player in the German fitness industry. Recently, his company, RS Group, bought Gold’s Gym for $100M. Now, he’s the owner of Gold’s Gym, and he will have a significant impact on the fitness market worldwide.

He was born in Bamberg, and, at the age of 15, he started working out in a small weight room near his home in Schlüsselfeld, Germany.

Rainer remembers these days well: “In my first training days, I went straight to the big boys and asked, ‘How can I get big biceps like yours? They replied, ‘You must buy the book by Arnold Schwarzenegger called The New Encyclopedia of Modern Bodybuilding.’”

His performance at school was poor, and he had to repeat the ninth grade. He decided against studying at a university and instead wanted to work in the real world. He started his own supermarket, using the Edeka system. The German supermarket Edeka is very established and offers young entrepreneurs the opportunity to apply and use its business concept (i.e., franchise). He managed several stores, and his workload was 100 hours a week. He woke up as early as 3 AM, went straight to his business, checked the inventory, and, when something was missing, he stocked it again. He used to work until the evening. In the process, he learned the basics, such as accounting, and how to run a business.

In 1997, he opened his first gym in his parents’ house just for fun. In the attic, there was enough room for all the fitness equipment. Frank Pfraumer, a bench-press star, owned a large quantity of equipment from the company Gym 80, and he handed it over to Rainer Schaller for an affordable price. Later, he invited his friends to come over and train. Rainer charged some bucks for training and later admitted the business was mostly illegal.

A lot of strength athletes came to his gym, and to date, Pfraumer’s feats of strength are still some of most impressive Rainer ever witnessed. In Rainer’s words, “It was always exciting when he bench-pressed 180 kg raw, and then 240 kg with his bench shirt. The bar bent a little, but the Gym 80 equipment was just indestructible.”

A brief time later, he found his passion for fitness, and he took a big step forward; he sold his well-established supermarket business for €150,000.

In the ‘90s, there were already gyms in Germany, but the monthly fees were very expensive. Reiner realized that he had an opportunity and a niche. He took all his money and opened a discount gym. He followed his vision to open a minimalist studio. Rainer worked hard to keep the monthly fees as low as possible, and he renounced luxury. “I had to sleep on a mattress in my gym. I was the cleaner and personal trainer, but it was the best time of my life.”

Reiner idolized Americans and said, “Gold’s Gym has always been my role model. I read a lot of magazines— like Flex and Muscle Mag — about the Mr. Olympia winners. In 2002, I was in Venice Beach for the first time. Joe Gold was an inspiration for me, what he built up there.”

The First Step Ahead

Rainer chose a renovated industrial hall for his first official and legal gym. His then-girlfriend suggested that he call the gym McFit.

His company grew heavily in the following years. In 2000, he opened two more gyms, then between 2004-2008, he opened 100 gyms throughout Germany. Currently, 5,000 people are working for his company.

Since establishing his first commercial gym, he has never given up training. In an interview published in 2017, he stated that he trains constantly and bench-presses 120 kg/264lb. Remember, he’s in his 50s! (2)

There’s a great German interview about Reiner’s purchase, which was done by bodybuilder David Hoffman. The video, “The $100 Millionen Deal,” obtained 100K views and is quite interesting.

The interviewer asked him, “What are you going to do with Gold’s Gym?”

Reiner answered that he has met many people in America who put their hearts and souls into Gold’s Gym. He wants to keep the cult status alive. In Rainer’s words, “Changes must be approached very carefully. You must maintain the heritage of Columbo, Serge Nubret, and Lou Ferrigno. I remember the picture of Arnold, in which he walked through Munich in a pair of swimming trunks. The high society of Munich just dropped their jaws to the floor.”

Rainer and his team operate quite fast. They bought the brand Gold’s Gym in 2020, and, after a brief time, they built the first Gold’s Gym in Berlin. It is a 5.200 sqm facility. It’s a huge campus with multiple training areas.

They set up an extra-large hall, where only competitors are allowed to train. It is called the “Performance Center” and is reserved for competitive athletes. They have a vision of all professional athletes training in that huge hall. They want to build a huge training center.

The Germans developed a bike called Boost Bikes. In the hall called Green Power, there are 150 Boost Bikes that generate electricity via muscle power. On Sunday, they are inviting all the people of Berlin to train together for a worthy cause.

“For all Berliners, between 10 and 16 o’clock, everyone can enter Gold’s Gym for free to cycle and generate electricity for the environment.” – Pierre Geisensetter (Manager of Gold’s)

They have an outdoor training area, and they built the heaviest cable tower at 320 kg. Furthermore, the Germans love vintage stuff, and they know that Joe Gold used to construct all the equipment with his hands. They shipped the original cable tower, which was located at the original Gold’s Gym (Address: 1006 Pacific Ave, Venice, CA) from America to Berlin. They also shipped all the posters from Arnold and company, and they are the original scans from America, and nothing was reprinted.

The Germans also built the heaviest dumbbells (330 lb) worldwide. They are made from solid gold (24 karat); another pair is in Venice Beach, CA.

Pierre Geisensetter is the Communications Manager at Gold’s Gym in Berlin. In the above YouTube video, he gives insightful information about the purchase. He was quite often in Venice Beach to train with some legends. German bodybuilder David Hoffman interviewed him.

He met Sylvester Stallone and was amazed at how strong he was: “That guy has huge hands, and a powerful grip.’ He recently met Arnold Schwarzenegger and had the pleasure of talking to him, but unfortunately, he didn’t go into detail. Furthermore, he met Carl Weathers, the actor from Predator.

Pierre remembered the meeting as follows: “He stood opposite me. I’m 185 cm tall, and he’s 190. In his early 70s, he still has incredible strength. Furthermore, I had a lengthy conversation with Arnold Schwarzenegger. I was insanely pleased with the purchase of Gold’s Gym. I loved traveling to Los Angeles, loved being out there. Everyone knew that Arnold trained at the legendary Gold’s Gym in Venice. I went in, and that feeling was indescribable. Even if Arnold was not always there, you felt his presence. You felt like you were a part of Terminator or Predator. I am not aware of any other brand that’s so close to bodybuilding.”

Furthermore, he explained that Gold’s Gym never lost its cult status. David Hoffmann admitted that Gold’s had tough times, too: “From my perspective… Gold’s Gym went through some changes. I remember it was sold again, and the pictures of Arnold were taken down. When I was first there, bodybuilders were allowed to work out for free, and after Gold’s was sold to a company, I was supposed to pay $40 — even though I had a photo shoot. It became quite commercial. I contacted Ed Connor, and he said, ‘The new owners don’t understand bodybuilding.’”

Pierre agreed with David and said that the then-owners didn’t know about bodybuilding. Their expertise was more in oil and hotels.

Added Pierre, “Yes, some oil business guys from Dallas, Texas. They have little to do with our sport and history. They owned this company for 17 years but didn’t manage to destroy the brand. We [at Mcfit] love lifting weights.”

Pierre promised David that the big boys would train for free.

The Big Change to All Gold’s Gyms Worldwide

Rainer Schaller is working closely with the German fitness equipment manufacturer Gym 80. Schwarzenegger and Ralph Möller used to work out on those machines during their careers in Germany.

Mr. Schaller wants to replace the old machines in Gold’s Gym with Gym 80 machines. He thinks that these machines have a vintage factor and cult status, and so they will fit great inside Gold’s Gym.

The company was established in 1980 by Walter Herden. He was a German engineer and loved to work out in his spare time. He was not satisfied with what the current market provided. He decided to develop his own equipment, and he built a huge fan community. The company Gym 80 was born. The product portfolio has grown enormously and includes 300 products.

Furthermore, Gym 80 developed the famous hip-thruster machine. Even the actor and former wrestler Dwayne “The Rock” Johnson uses it to train his glutes! He imported it directly from Germany. I currently saw an interview in which the CEO revealed that he ordered six machines! (3)