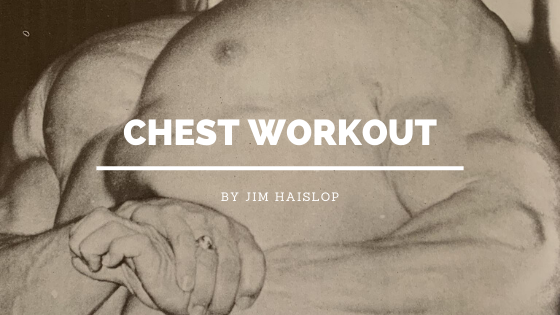 Jim Haislop of Tampa. He was a Navy man and served aboard the U.S.S. Vulcan out of Norfolk, Va. He was often compared to Steve Reeves due to his small waist and broad shoulders. His major wins included the 1968 AAU Mr. America contest and placing first in his height class at the 1969 NABBA Amateur Mr. Universe contest. The following chest workout is very oldschool, stretching the rib box, pullover and deep breathing squats – Mr. Berg

The importance of a well-developed chest can not be emphasized too strongly. Outstanding development of the pectoral muscles is one of the greatest assets to a body builder. This muscle group is almost always trained in the beginner as well as the advanced bodybuilder. While the pectoral muscles are trained, they are, in most cases, not trained correctly. This causes poor and uneven development of the entire chest.

While a physique contestant’s chest may look good from the front, he may lose thickness when he turns to the side. This is one example of little or no rib cage training.

The best and most common way to expand the rib cage is the pullover exercise. This exercise can be performed in many ways.

Jim Haislop has found that the best way to do this exercise is while lying on, or leaning over a bench with light dumbbells or a barbell.

Full squats also help the development of the rib cage. This is due to the deep breathing that takes place during heavy squatting. This heavy breathing acts just like the blowing up of a balloon inside of your rib cage, therefore expanding the rib cage considerably.

To perform the pull-over, lie on a flat bench with a dumbbell held between both hands. Lower the weights as far as you can go. As the weight is lowered, inhale, return the weight to the starting position exhaling on the way up.

Jim prefers the one dumbbell held between two hands, but a barbell may be used if desired. This exercise should be performed between each set of squats.

Jim started with the benchpress because almost every bodybuilder that has done any chest work at all, has done this exercise. He remembered that one of the first exercises he ever did was the benchpress. 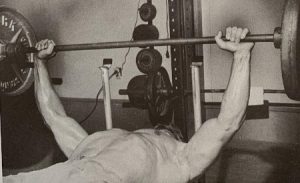 The benchpress is done while lying back down on a bench and simply pressing in an upward movement using a barbell. He did eight to ten reps of this exercise.

While this is the basic exercise for the chest it will not work the pectoral muscles thoroughly. It is a good pectoral exercise but a lot of front deltoid is in play while performing the benchpress. 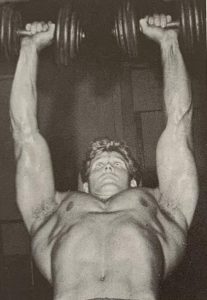 This is his favorite exercise and he has used it almost constantly in his past years of bodybuilding. The incline dumbbell press will thicken the upper chest that so many bodybuilders lack.

“I think one of the worst things in chest development is to see big, heavy pectorals developed only at the bottom or center of the chest, while at the same time the collar bone is prominent. This usually occurs when no incline presses are employed in the chest routine.”

Jim did the incline bench at about 45 degrees. Hold a pair of dumbbells straight over head. Lower the dumbbells down to the outer edge of the shoulders and then to the upright position again. Remember to go all the way down and touch the shoulders in this exercise. Inhaling should be done on the downward movement and exhaling on the upward movement or pressing movement.

Incline pressing can also be done in the same manner with a barbell. 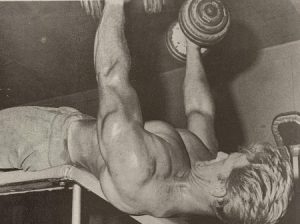 The decline pullover and press is really one of the best exercises Jim done correctly. He has put a lot of concentration on this exercise and found it most effective.

When doing this exercise, you may have to have a couple of training partners hand you the weights as you make progress in this exercise. 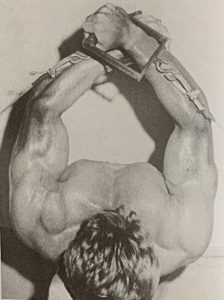 Working the chest with cables brings out separation and shape that can’t be obtained in any other chest exercise. There are many ways to perform cable work but the most effective way is with a cable cross-over machine.

Cable cross-overs are done while lying on a flat bench with arms outstretched. While in this position pull the cables toward you and cross them above the chest. With each repetition, alternate the hand position as the cables cross.

The cable cross over exercise can also be performed while standing or while on an incline or decline position. If you don’t have a cable cross-over machine you can substitute it with a regular set of hand cables by hooking one end of the cable on the floor or wall.

Below are listed the exercises Jim did. Those who wish to follow this routine should use a weight that will allow the exercise to be done in strict form.