GPP training- its origins and implementation 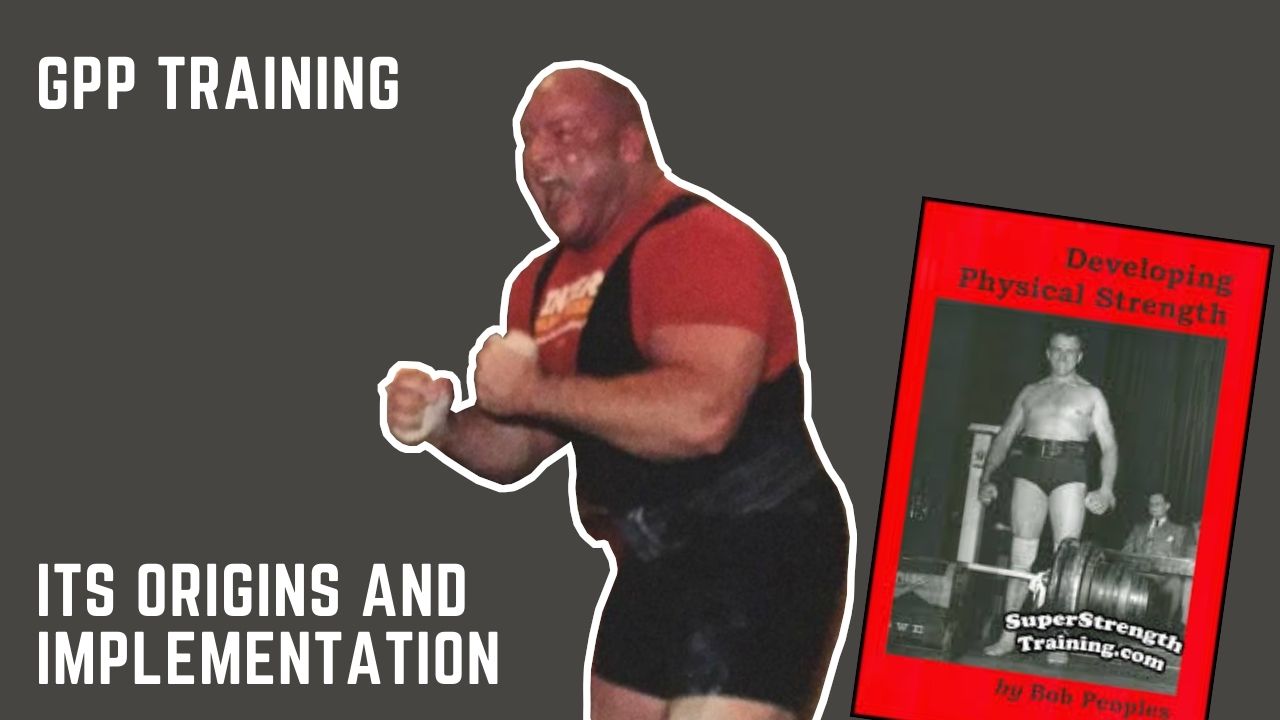 General Physical Preparedness, or GPP, was a term I first learned while reading articles written by Louie Simmons in 1995 in Powerlifting USA and Milo magazines. Louie Simmons has justifiably been called The Godfather of Powerlifting as well as the Mad Monk of the sport. Based in Columbus Ohio his entire life, Louie lifted National and World Class weights in his twenties through his 60s!

After reading his book, the Iron Samurai, I learned that Louie had been a brick mason’s assistant – called a block tender, since the age of 13. This manual labor job would have entailed carrying bricks, ladders, and other stone mason objects. Louie was also a great youth baseball player, once leading his city in home runs as a teen.

Louie described GPP as a degree of fitness which is an extension of absolute strength.Louie’s 90s era recommendation to improve GPP was to use a sled dragging program. Over time, Louie has evolved from his recommendation of sled dragging to incorporate all types of strongman training in order to improve a strength athlete’s GPP. Louie inspired me to keep my body in shape, to be a conditioned strength athlete capable of doing more work. The more work I could complete in the gym and recover from, the stronger I would become.

In the early 2000s, when I began training for and entering strongman contests, I determined that training the tire flip, farmers walk, yoke, dragging and stone lifting is the best way for a strength athlete to improve their GPP. The current onslaught of 900 and 1000lb deadlifts is proof that when a lifter is in better shape, that lifter can train harder, recover better, and make strength gains which were unprecedented less than 20 years ago. In 2003, there were only 9 men who had deadlifted over 900lbs officially, where recently in 2021, 6 Professional Strongman Competitors pulled 1000 in the same Giants Live Contest! Eddie Hall and Thor both have pulled over 1100!

In the U.S., many strength athletes enter strength athletics after having been either a football player, wrestler, or any number of popular sports that teenagers are offered. These sports build a certain base of GPP that helps an athlete gain strength at a faster rate because they had a stronger foundation of fitness qualities before they began strength training.

These fitness qualities would be flexibility, aerobic capacity, inter muscular coordination, and endurance.
As for me, I loved to play outside when I was young. I ran, climbed trees, played tag, pickup ball games, rode a bike and a skateboard and walked/ran everywhere. You were told not to come home until it was dark and you played with your friends outside from sun up to sun down. In my early teens, I began playing organized sports such as little league baseball and volleyball. When I began high school, I started playing football- which was a great GPP builder with sprinting, form running, weight training, flexibility and hours on my feet at practice and games. As high school was ending, I began studying American style taekwondo, which introduced me to sparring, extreme flexibility and abdominal training. I began Powerlifting as soon as high school football ended so I was doing martial arts at the same time for a year.

I attribute my longevity in strength sports, with having done meets/contests for over 36 years, to my active upbringing and football training coupled with martial arts.
In the 1940s, Bob Peoples held the world record in the deadlift with 700 lbs. Bob was a farmer- which is hard physical labor and a form of GPP. Bob played football for a year at college in Tennessee, which also added to his GPP and power foundation.

Today, Dennis Cornelius, a top raw and drug tested powerlifter in the U.S. sets National records and also does jiu jitsu. The first powerlifter in the world to total 3,000 lbs,Donnie Thompson, had an extensive football career, playing arena league until training as a bodybuilder. Once Donny turned to powerlifting, he knew he needed to increase his GPP so that he would be able to set all timeworld records in powerlifting. What he did was become RKC certified in kettlebell training by Pavel Tsasouline.

As for how to program GPP training, Louie Simmons said he would use the 60% rule, meaning that he would go heavy on sled dragging for a distance of say 200 feet and then each of the next two days he would do 60% of the previous days weight for 200 feet. On the fourth day, he would program the lifter to do his heavy weight again and repeat the cycle. Louie Simmons has many free articles on his Westside Barbell Website regarding how to increase GPP.
The reality of improving your powerlifts by increasing your GPP is to pick an activity that builds your work capacity up and does not break you down for your main strength workouts. As long as you are setting lifting records and are healthy, keep doing as muchof whatever activity improves your overall fitness base.