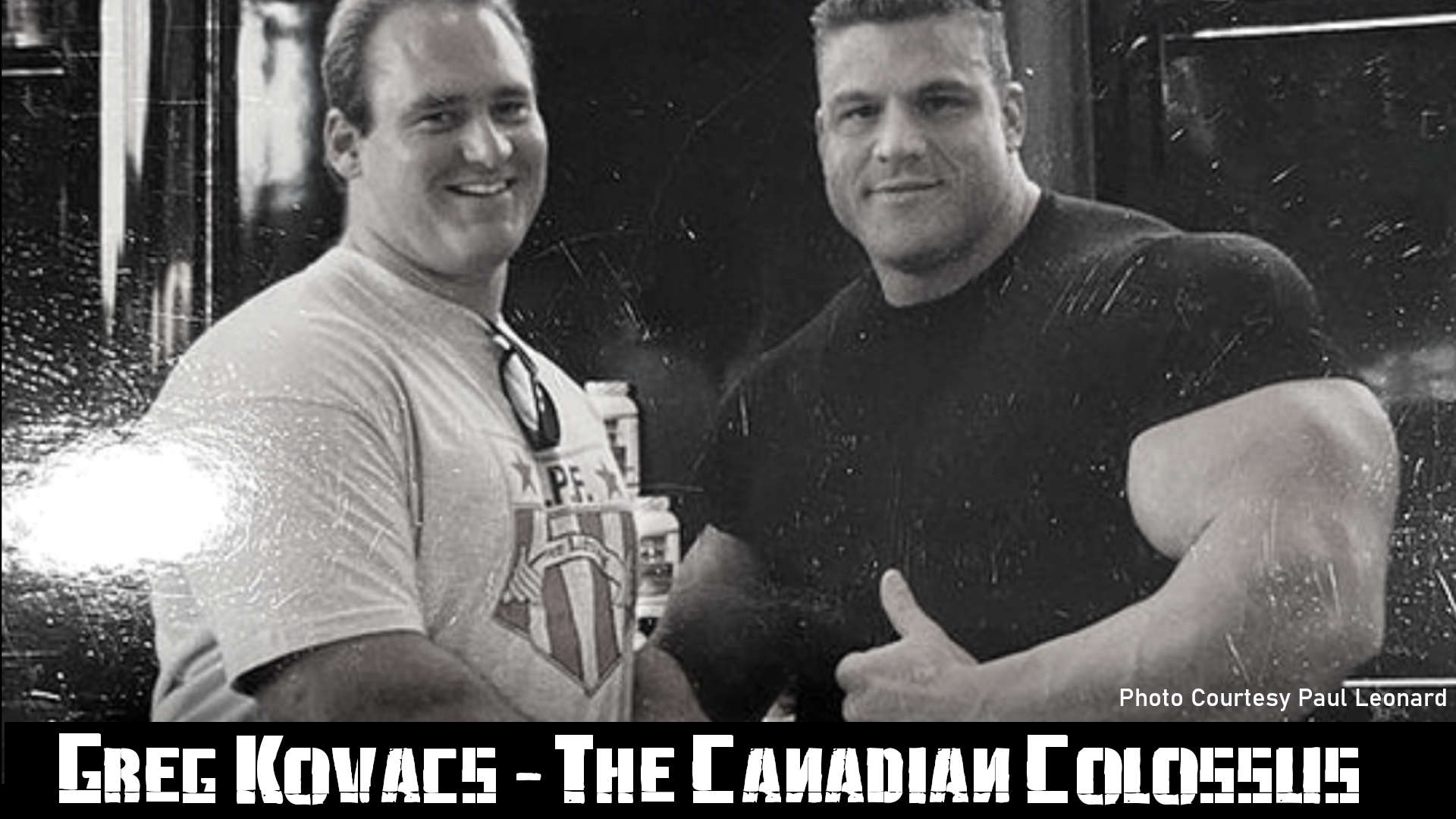 During the decade of the 1990s, before the dawn of the Internet, a new phenomenon entered the bodybuilding world, the 400lb off season bodybuilder! Although there were a few athletes associated with this mythical figure for body mass, the most famous was Canadian IFBB professional Greg Kovacs.

A YouTube video entitled Greg Kovacs- rare photos, that was posted by a channel Fitness by Matt, has pictures of Greg, provided by his sister Marta, beginning at age 13. Greg has obvious potential at that young age, with heavily muscled biceps. The second photo in this clip is of Greg in 1986, clearly showing great progress in his muscular development at age 18. A third photo from 1987 of Greg doing a most muscular pose shows incredible development as the author narrates that Greg was then at his full adult height of 6’2”. A 1988 photo shows Greg, with help from a small framed spotter, bench pressing in a home gym with 585lbs of plates on the bar!

Fitness by Matt relates a tale told by Kovacs that he went to a powerlifting meet once and the best lift on the bench press was 430lbs. Greg was granted permission to attempt the weight and he did it for 19 repetitions! Continuing on with an analysis of the photos obtained from his family, there are photos of Greg as he went over 300 lbs for the first time and he has visible veins in his legs. A 1992 still shows Greg at 22 years old looking amazing in a Canadian provincial bodybuilding contest.

Nick’s Strength and Power has done multiple YouTube videos on Greg, to include a 2017 piece entitled “the first bodybuilder to weigh 400 lbs., in the piece Nick claims that Greg got as high in bodyweight as 420lbs in the offseason. Nick says that Greg was 6’4” tall and competed at 330lbs on stage, with 26” arms in the offseason and 25” in contest condition, with a 70” chest and 35” quads when competing.

Despite not having competitive success, Greg was a financial success by receiving $10,000 dollar per appearances at his peak, of which he made many. That is when I met Greg, at the 1997 Mr. Olympia Contest Exposition in Long Beach, California. Nick posted another YouTube clip in which you see Greg have his arm measured at 25.5” while he is in good shape in the gym.

Greg was the star of a bodybuilding video in which you can watch him workout at a Golds Gym in Canada. The video was excellent quality and produced by Greg’s main sponsor, Muscletech. In the 1990s the supplement industry was booming when anabolic steroids became controlled substances and all the major supplement companies had at least one bodybuilding star on their payroll to endorse their products. Muscletech was a major player in the industry by the late 1990s, buying up multiple page advertising spreads in all the bodybuilding magazines of the day.

The video opens with Greg incline pressing on a smith machine with 5 – 45 lb plates on each side. Greg does 3 repetitions on his own, then his spotter gives him just enough assistance for him to lock out additional repetitions in strict form. Greg then adds a 45 lb plate and does 5 repetitions with that huge amount of weight in strict form with what appears to be minimal assistance from his spotter. The incline bench Greg is pressing on appears to be set at 30 or 35 degrees.

The next exercise Greg does is a Hammer strength bench press machine it’s 4 – 45 lb plates on each side of the machine. Greg smoothly and strictly presses this load for 9 reps and then finished the set with two partial repetitions, moving the weight from his chest and maintaining tension on his chest when he hit a sticking point and was unable to complete those last two repetitions. Greg continues the onslaught of his chest muscles with incline dumbbell flyes with 110lb dumbbells in each hand for high, strict repetitions on a bench set at approximately 25 degrees.

Day 2 begins with Greg training his massive biceps, with seated strict alternating dumbbell curls. It would appear Greg works up to over 70lb dumbbells. Like with his chest workout, Greg poses the body part he is training in between work sets. Next up, Greg does single arm preacher curls on an Icarian machine that is designed to use dual handles. Greg uses strict form and ten repetitions per set on this exercise. Tricep push downs are next, first with both arms on a straight bar, then he finished with single arm triceps extensions with an underhand grip.

Greg’s wife described his diet on the video as breakfast being a large beef meal with 200 grams of carbohydrates such as oatmeal, bread or pancakes, along with 3 whole eggs. She summarized that Greg has 7 meals per day, alternating his protein sources throughout the day between beef, chicken and whole eggs. His carbohydrates are always potatoes, rice, yams and oatmeal.

The third day of training shown is Greg’s leg workout and it begins with his easily doing the whole stack of a leg extension machine in a very strict manner. Next, Greg loads up an godly amount of 45 lb plates on a Nebula leg press and proceeds to do very strict and impressive repetitions with a huge amount of weight. A hack squat machine with 6 – 45 lb plates per side was the next exercise Greg expertly executed for high repetitions.

Greg described how he could press behind the neck 405 lbs for 6 to 8 repetitions when he was only 19. Seeing as my life’s work has been powerlifting, I cannot say if Greg’s claims of strength are true, but I will say that I met and spoke to Greg when I was totaling 1950 lbs in official powerlifting competitions and Greg was certainly one of the largest muscular humans I have ever met.

I have no reason to doubt that the weights he used in The Strongest Bodybuilder Alive were real. I do not know if Greg could have beaten Johnny Jackson, and I doubt he could have beaten Stan Efferding when he won the World’s Strongest Pro Bodybuilder Title by officially totaling over 2300lbs raw in competition. Greg focused on bodybuilding training when he shot that video so it would not be fair to compare the two athletes.

Greg’s training philosophy is to go as heavy as he can for full range of motion repetitions for 6 to 8 reps. Greg said he trains each body part only once per week. Greg said he had to learn to train instinctively, knowing when to work the muscle next.

Greg’s 4th training day is shoulders and he begins his session with the Hammer Strength press behind the neck machine, doing 7 reps with 5- 45lb plates and 1- 25 lb plate on each side. Greg’s form is textbook as always. Seated strict side dumbbell laterals with 70lb bells were next, with Greg’s form impeccable and strict as hell. Icarian side deltoid raises followed, with Greg pushing the exercise to failure.

Day 5 is a back day, beginning with Icarian rear deltoid flyes with the whole stack, strict for high repetitions. Strict dumbbell shrugs with straps for high reps are up next on the menu for Mr. Kovacs. Underhand grip pull downs with the whole weight stack and an added 45 lb plate were attacked next, with strict form and a great range of motion. Greg’s last exercise was one arm Hammer strength seated rows with 5- 45 lb plates on each side for, many full, strict repetitions.

Greg passed away in 2013 at the age of 44 from heart failure, two weeks after he had a heart surgery. I am glad that I got to meet him and congratulate him on his success in person in 1997. I hope he left this earth knowing that he influenced countless iron addicts with his size, personality and well thought out training. May he Rest In Peace.