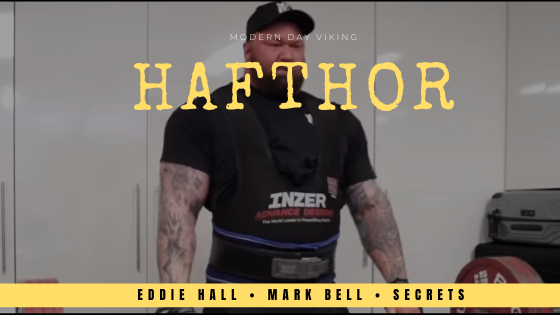 I am writing this piece during the week before Thor will be attempting to break the all time strongman world record in the deadlift on May 2, 2020. This record breaking attempt is scheduled to be streamed live on ESPN as well as Rogue’s YouTube channel. In the strength community, there is a lot of excitement in anticipation of Thor’s record attempt and the mainstream interest in the greatest test of all around strength, a maximum deadlift. The current record holder, Eddie Hall who did 500 kilos in 2018, has voiced his opinion that although he considers Thor stronger than him, this record attempt should not count as official. Due to social media, many have weighed in with their opinion of the attempt, which has fueled the excitement and build up to this historic attempt.

On April 23, Thor was featured on Mark Bell’s Power Project Podcast to discuss his competitive strongman career as well as this impending record breaking attempt. Before we discuss Thor’s fantastic interview with Mark and his podcast crew, let’s take a moment to examine how Thor got to this point in his strength career.

Thor’s athletic career in his late teenage years, was focused on the sport of basketball, for which he was on the Iceland National Team. Thor was discovered by 4 time World Strongest Man winner Magnus ver Magnusson, who knew potential when he saw it.Thor has competed in World Strongest Man since 2011, finishing on the podium every year since 2012, until he finally won that title in 2018. Coming into this deadlift attempt, Thor has been on a role, winning three Arnold Classic Columbus Strongman Contests in a row, Europe’s Strongest Man winner in 2018, in addition to his aforementioned WSM win in 2018. Thor suffered a plantar fasciitis injury during the 2019 WSM Contest, gamely battling to finish the contest, which was won by Martin Licis. Footage of the contest on CBS Sport, shows Thor, ever the class act, rushing to congratulate his friend and occasional training partner Martins when he won the contest.

Furthermore Thor is arguably the most well known strongman in the world, due to his performances in the two biggest strength shows in the world, television coverage of those shows, social media content he creates, as well as his role as the Mountain in one of the most popular television series of the decade- Game of Thrones. Thor acted in that role for 8 seasons, stating on the Powercast that it was extremely difficult to train and compete for the highest level strongman contests in the world while acting full time. Thor creates and releases content of his training on YouTube and Instagram that inspires and educates his legion of followers. Prior to the COVID Pandemic, Thor did all of his training at this awesome gym in Iceland, which he shared on YouTube for the world to enjoy. Weeks prior to his deadlift record attempt, Thor switched his training to his garage in order to due his part to limit the spread of the virus. Thor is lucky to be able to train with his father. Thor’s father is tall, and appears well built but he does not display ridiculous genetic potential for size and strength, making Thor’s success all the more impressive because you know much hard and smart work was done to build Thor’s body into the specimen he is today.

Thor described to Mark Bell that he thrives on any negativity and that the more people hate on him, the more obsessed he becomes to prove the naysayers wrong. The outside negative energy results in Thor being more on point with every aspect of his game, from training, recovery, nutrition, and business. When Bell told Thor that Eddie Hall has said that Thor does not have the mindset to break the all time deadlift record, Thor dismissed the comment by saying Eddie Hall’s statement about his mindset is laughable. Thor cited Sebastian Oreb, his Strength Coach and Stan Efferding, his nutrition coach, as being instrumental in the past two years for his success, improved health and the best performances of his life. These two men are great strength minds who have supported Thor, allowing him to stand on the shoulders of giants. Thor’s coaches know he is stronger than Eddie Hall and this belief gives Thor additional motivation. Thor described that none of his inspiration has been forced, he is self driven and has been focused on strongman since he was 20 years old. Thor further described this point by saying when he began strongman training, he shut out those people in his life who did not support his ambition and he stopped staying out late as many young men do.

He told Bell that his current mental state was one of happiness due to his Canadian wife, who is 16 weeks pregnant with Thor’s first son. Thor has an 11 year old daughter who lives in Denmark with her mother, with whom Thor does not get along. Thor described how painful it had been for him in the past not to see his daughter, calling it the worst stress in his life at one time, feeling as if the World was collapsing in on him. After describing this situation, Thor said that after going through that time in his life-no words or Internet hate could not bother him in the least.

When asked what Thor has done in the last few years to improve his deadlift he said two things that have helped him are 1. Consistency in training the deadlift and 2. Hot/cold treatments. Mark Bell tried to dig deeper and asked him if a special assistance exercise had boosted his deadlift recently and Thor answered back with the answer: “ I did an exercise that begins with the letter D, you would be amazed what deadlifting consistently for a few years does.” There are no secrets, just consistent effort and hard work.

Thor replied to the question, what is next after this deadlift record attempt? “I just want to focus on this deadlift record now.” When Thor talked about the impending deadlift event, he never said the word attempt- as if he is supremely confident that he will break the record, in his mind it is a foregone conclusion. Thor said his weight is up to 206 kilos, aka 453 lbs for the deadlift. When he wants to gain weight, he will add more carbs in the form of white rice and dextrose to his diet. Cheat meals are carb based as Thor described joyfully that he will smash a pizza occasionally. Hell yeah!

Thor came off as very humble, hard working, down to earth, focused, and confident in the work he has put in to get to the record attempt as well as the silent fury of a patient man. He was extremely gracious and thanked Mark Bell for taking the time to interview him. Thor closed out his interview by saying that having his deadlift event streamed by ESPN does not add pressure to him as he is doing this deadlift for himself as well as for his supporters.