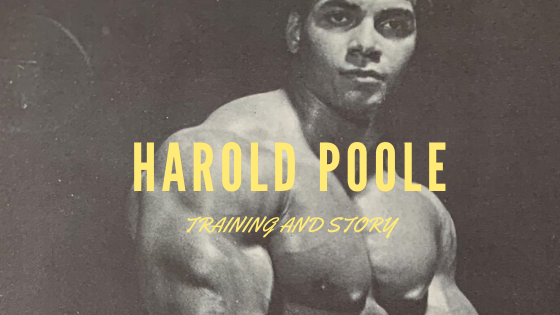 “In the half-sport of physique competition where ideal vary and perfection is never attained, a man has only a few years in which to excel before the toll of advancing age must be paid. At the age of eighteen, Harold Poole has come closer to achieving that elusive perfection than most bodybuilders can ever hope to. For at this age, Harold has already won the title, Mr. America’s Most Muscular Man, and taken second place in the Mr. America contest.

At seventeen he was already a Junior Mr. America and the holder of several other regional titles. This is an exceptional record for anyone in only his third year of major competition and truly phenomenal considering his youth.

It exceeds even the brief meteoric career of Eric Pedersen who, as a teenager, tied Steve Reeves for the 1947 Mr. America title, only to lose in a re-vote, and shortly to turn professional.

How can anyone go so far so fast? Where work necessary for impressive gains can best be measured in megatons, where maturity is almost a basic requirement for top competition, where dedication and ambition must be renewed daily, how can a teenager be so near the head of the parade? 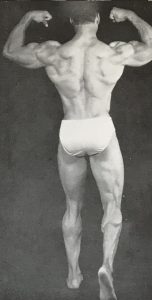 First, don’t be misled by his calendar age. Although he made his bow to the world on December 25, 1943, in appearance and outlook Harold gives the impression of a man five years older. He has matured rapidly, both physically and emotionally.

He is also fortunate in inheriting good health and a basically fine body structure. He was never a 98 pound weakling, or for that matter a weakling at any weight.

He has always been healthy and vigorously active in athletics. He had no crippling diseases, no childhood injuries, and no neighborhood bullies to overcome.

He has never had to be careful in his diet. Even now he takes whatever he is served at home and supplements only with daily additions of high protein and wheat germ oil.

With all these points in his favor, Harold also got an early start in weight training; he’s been at it regularly since has was thirteen, specifically those years that many consider most important in establishing the proper foundation for a truly outstanding physique.

So far we have seen that Harold had a good physical inheritance culminating in early maturity, an athletic life, and an early interest in bodybuilding. All this, of course, is beneficial but not enough in itself; it is sort of like frosting on a cake.

There are two other all important factors necessary to outstanding achievement in any endeavor but particularly in weight lifting and bodybuilding – hard work and dedication. A look at Harold’s current training routine will demonstrate the physical effort he gives his favorite sport.

Harold works out at Fred Hofmeister’s gym in downtown Indianapolis where all the pictures illustrating this article were taken.

Although, he increases this to 5 times a week about three to four weeks before a major contest. Each of his workout lasts about three hours; and he does his complete routine each workout, always following the same order of exercises given below:

1. Full squat with weight behind neck (This is not one of Harold’s favorite exercises which may explain its first place in his routine.) 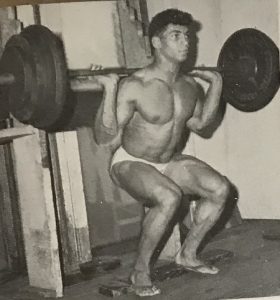 3. Calf raises (Note that this method departs from that followed by many bodybuilder who work in sets of three – toes straight, toes in, and toes out – and then repeat the series with further sets of three) 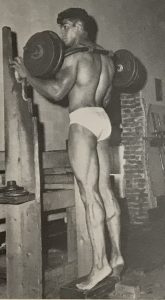 4. Incline bench press with dumbbells (this exercise is Harold’s current favorite because it works the area where he feels he needs the most improvement – his upper pectorals). 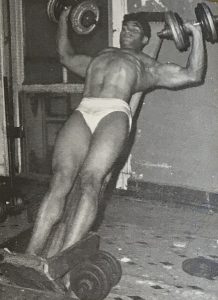 5. Latissimus pulley in half crouch position.
(This exercise is alternated set for set with the incline bench press)
200lb 10 sets 10 reps 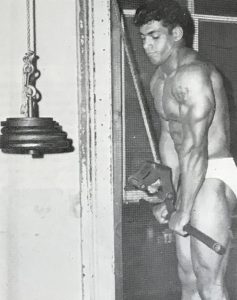 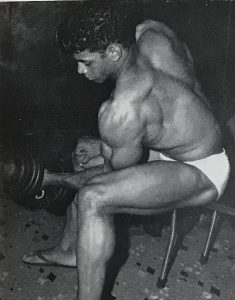 11. Harold will generally finish off his workouts with a few chins behind the neck.

Harold works fairly steadily with very little rest between sets, although he doesn’t turn aside any conversation coming his way in between. He always works out in trunks; and wherever the exercise permits it, he keeps an eye on the mirror to insure greater concentration on the muscle groups he is working.

Remember that Harold had kept a full program of seasonal sports all during high school as well. During fall he was Shortridge High School’s starting fullback. During the past winter he was undefeated in dual competition in wrestling and placed fourth in the Indiana State Interscholastic championships.

As a 195 pounder he must wrestle men far heavier than he in the heavyweight class. In the spring his fancy turns to thoughts of track where he has run the 220 yard dash in 23.0 and the 440 yard dash in :50.5.

He has also put the twelve pound shot 55 feet. Undoubtedly football and track helped Harold to develop further his naturally good calves; he is one of the few colored men to build good proportions in this most stubborn of muscles.

Wrestling would help to account for his ability to maintain his superb midsection without the benefit of special exercises. 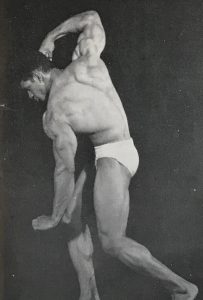 But all that has been said doesn’t put the mark of champion on him. That comes from his dedication and his good organization of his personal life. His life has to be well organized with his tight schedule.

And he has the goal close to his grasp. An examination of the points in the recent Mr. America contest will show that Harold gave the winner a close race. Considering that he lost heavily in general points because of a severe speech defect, it can be seen that the judges felt that based on physique alone he was worthy of the top prize.

And it is right here that Harold’s determination and dedication show most strongly. Although he has an athletic scholarship to Purdue and the grades to assure his acceptance (he has better than a B average in high school), he has elected to take a year off and attend the Bogue Institute for Stammerers in Indianapolis. They tell me that his speech defect is curable given proper instruction and practice.

For this reason the heavy expense in time and money (six hours a day of specialized instruction and individualized training are not cheap) will be well worthwhile.

And it will still leave Harold sufficient time for a full time job. He has been working part time during school since he was fourteen, and full time for several summers.

At first his work was to help with family expense, but since the death of his father about two years ago, his pay check has been a necessity for himself, his mother and a younger brother.

Harold has an older sister and two older brothers who live elsewhere and have families of their own to care for. It’s apparent that Harold’s early maturity emotionally and in mental outlook have been hastened by the heavy responsibility he has borne at an age when many boys are thinking mostly of girls.

He hasn’t missed out completely in this field either. His schedule is tight but well organized, and his heavy program of scholastics, school sports, workouts and breadwinning still leaves him time to squeeze in one or mor dates a week.

And, of course, the top bodybuilders are always willing to help others. In Harold’s case this takes the form of a garage gym which he runs as a hobby to help boys in the neighborhood. He has nearly twenty of them, including his thirteen year old brother, on the way to better health and stronger bodies.

Harold got his own start in a home gym with a friend. Up until about a year ago when he felt urgent need of professional coaching, all of his workouts were conducted in this atmosphere. In spite of all the above activity, Harold still advocates spending one-third of his life sleeping, at the rate of 8 hours a day.

Harold hasn’t formed firm plans beyond college. He wants to major in physical education and biology. In physical competition he has eyes on both the Mr. America and the London Mr. Universe titles during his collegiate period. Afterwards, who knows? One thing is certain. If he continues to improve during those too few years when a man can make his best gains at anywhere near his present rate, he will have one of the most spectacular physiques the world has ever seen. He has already shown that he has all the requisites for this in abundance.

This article prepared and submitted by Mr. Ralph Countryman, who also took the pictures.”