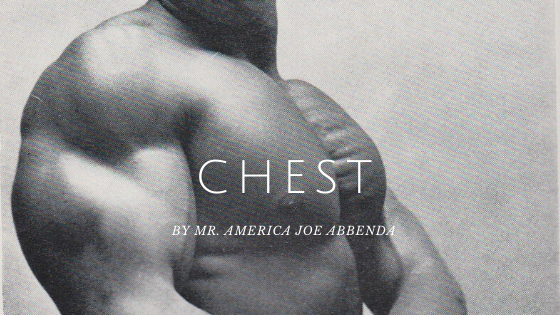 “Except for the upper arms, most beginning weight trainees seem to be more interested in developing the chest than any other part of the body. And their point is well taken, for a well-developed chest area, inside and out, can be an outstanding feature of a bodybuilder’s physique as well as a decided asset in the physical fitness sense. The complete development of the chest encompasses much more than oversize pectoral muscles.

To be accomplished sensibly, improvements in chest development must come from the inside out. Notable increases in chest measurement, so described by young bodybuilders, come from building a larger rib cage and developing fully the muscles of the upper back rather than from overdeveloping in the pectoral muscles.

For the ultimate in chest size it will behoove the trainee to make up his mind that some hard training is ahead of him. Nothing worthwhile comes easy, and this holds true for your workout results.

The maximum in chest development will come only if you include some type of heavy training in your routines, exercises which encourage breathlessness.

This heavy breathing, when utilized with some type of pullover movement, will cause the enlargement of the rib cage. This foundation, once laid, will stay with the bodybuilder throughout his training career and his life at that.

The enlargement of the rib area, besides adding to the measurement of the chest, also gives ample room for the vital organs in the chest, ie., the heart and lungs.

The movement most conducive to deep breathing is the squat. High repetitions in the squat, 15 to 20, with three deep breaths between the repetitions, will certainly cause the breathless condition sought after. 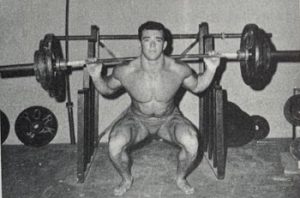 Between each set of these squats the trainee should do a set of straight arm pullovers for the same sets and repetitions. The bodybuilder who prefers to do low repetitions on the squat movement can include 2 to 3 sets doing higher repetitions after he has completed his heavier sets.

When the tape is passed around the chest it also included the back region. It therefore stands to reason that a thick, muscular upper back will be an important factor in the over-all measurement of this area.

Regular and progressive exercise on the back will be conducive to adding size to the group and in turn add to the over-all size of the chest.

The addition of back work on the order of chinning with a wide grip to the front and back of the neck will be especially valuable for adding width to the bodybuilder’s upper back. Of course chinning alone will not give complete development of the region, but it is an especially valuable addition to one’s routine.

As to the choice of exercises for the chest itself, you will find in time that there are certain movements which give to one bodybuilder an entirely different effect than another doing the same movement.

It will be up to the individual to experiment to find what exercises affect him in a manner suitable for the goals he has established for himself. This will hold true for any given movement.

I have known fellows who would do the bench press movement with real heavy poundage’s and not get what you would expect in the results, that is, good pectoral development.

Others would do the very same movement with much lighter pundages and get the results the man using the heavier weights would except. As I mentioned, it is up to the individual to discover what method and what exercises affect him in the way he wants. Sometimes just a slight change of style or grip in an exercise can mean the difference between success and failure.

Another important aspect of pectoral training, and this holds true in general, is proportion. That is, keeping all groups of muscles of the body in harmony with each other.

This is probably the most difficult phase of training. The young trainee may not give this much thought when he initiates his training program, but in time he will find how important it is.

It is possible, due to the structure of certain individuals, in a short time for one to find himself with an overdevelopment of the pectoral area. Within a reasonable amount of time this can become a possibility. At this time it will be a good idea to switch your emphasis to another body part. In this way the trainee will be working at proportion and directing his energies in a sensible way.

In the pectoral group itself proportion will mean an over-all balance of the muscle group. The tendency of many bodybuilders is to stay with favorite exercises for too long a period of time. The result is usually unbalanced development of one portion of a muscle. We all tend to favor certain movements, but one must learn for the sake of proportionate development that an occasional change in exercise movement is beneficial.

This, I found, can be corrected by doing most if not all of the chest exercises on an incline, even if just a slight one.

This incline will help to throw most of the stress into the upper portions of the muscle group in question.

Presently I am using just two movements for the chest area, but previous to the Mr. America contest I used as many as four. I would like to describe a few of the movements which I have received benefit from and possibly you can adopt some of them into your own training.

The first is the old-standby the BENCH PRESS, possibly the number one favorite of the majority of those who train. Lying supine on a bench, remove the bar from the supports, if you own a York Multi-purpose bench, or have your training partners hand it to you.

From this position, take a deep breath and hold it, lowering the bar to the chest and immediately press it to starting position.

I find that holding my breath until the bar is almost returned to the starting position allows me the maximum of control in this exercise. This is a basic movement which should be incorporated into every beginner’s routine.

It develops maximum strength and bulk in the upper body. I have found the best hand spacing for my own particular needs is a medium grip.

In this manner most of the muscles are brought into play. When making use of the bench press movement in my routine I use about 6 sets working up in poundage’s and down in the repetitions from 8 to 5. 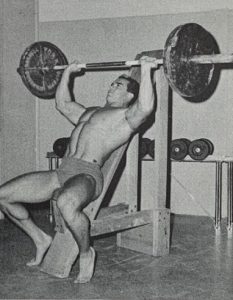 The next movement is the INCLINE BENCH PRESS, which I have favored for the past year or so. This movement is of more benefit to me than the previous one as it tends to work the same groups of muscles without putting stress on the lower pectoral region,

I do this once on a steep incline and take the weight from racks. If you do not have racks either clean the weight to the shoulders or have your training partners hand it to you.

From a starting position high on the chest, press the weight to overhead and lower. Breath deeply before the start of the movement and exhale on the return. Here the sets, repetitions and weight-increase system are the same as in the previous exercise.

The next movement is also an excellent one which works the triceps too. This is the DIPS ON PARALLEL BARS.

I use this movement as a change from the regular bench pressing movement from time to time.

I make use of resistance in the form of a dumbbell held from the waist by means of a chain. From an arms-locked position I lower myself slowly into a full dip position and return immediately to arm’s length. Here I use the same sets, repetitions and weight increases as for the two previous exercise movements.

The next movement can be done on either a flat bench or an incline and is an excellent one for the upper portions of the pectoral region.

This one is the BENT-ARM LATERAL RAISE or FLYING MOTION. This exercise makes use of dumbbells. With the dumbbells held above the chest and the arms slightly bent, lower off to the sides making sure to stretch the chest muscles.

Keep the palms facing each other throughout the motion. When you hit your low position, return the dumbbells to the starting position and repeat.

Breathe deeply and hold it from the start to almost the completion of each repetition. Here I like to use 4 sets of 8 repetitions.

Another good exercises which I turn back to often is the DUMBBELL BENCH PRESS. This movement can be done on either a flat bench or various inclines. I like propping the one end of a flat bench about six inches for this one. Starting from a position on the chest press the dumbbells together above chest. I begin the motion with the palms facing each other and halfway up twist the dumbbells so that the palms are facing forward.

I try to mentally contract the pectorals together. On this movement I like to use about 5 sets with the repetitions ranging from 6 to 8.

Continuing with the use of dumbbells we come to a good one to use for bringing out the lines in the center portion of the pectorals. 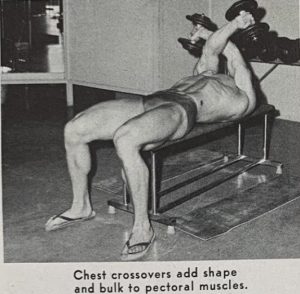 This one is similar to the bent-arm lateral raise only the movement is continued, allowing the dumbbells to cross over the chest. Call it what you will, it is an excellent movement for shaping and defining the pectoral group.

Here you will find that you must use a lighter weight than what you use in the flying motion. I like to use 4 sets of 10 repetitions.

I ordinarily use about 10 sets per a body part, using two exercises to make up that number of sets. The movements I have describes are about the best that I have employed. I would suggest not using more than three that involve pressing muscles, that is to say the bench press, dips, and incline press, in one workout. If you use three I would include one of the lateral type movements. That’s it for now. Best of luck to you in your training!”