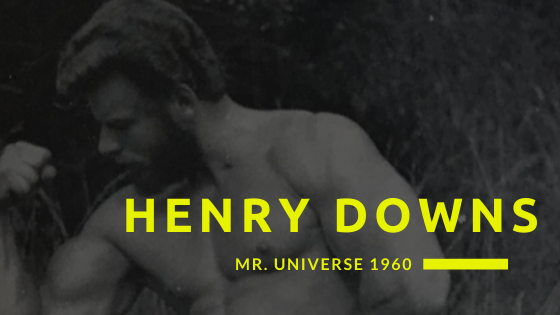 Henry Downs was born in Jery (Channel Islands). In the 1960 he won the title Mr. Universe. This oldschool bodybuilder combined weightlifting with parallel bar and ring work to build his physique. Here’s Henry Downs’s story and training!

Henry Downs was an athlete before he began to train with weights in January 1950. He was Bomber Command Champion of the Royal Air Force in the shot put (48 feet) and reached a creditable record of 145 feet in the discus throw. He was better than average in all track events. Most importantly, however, Henry was a hard worker on the parallel bars and Roman rings and this work was instrumental in developing his exceptionally powerful shoulders and upper back. Though Henry was then muscular and strong he was no superman, as his measurements at that time (1950) will attest: chest 37, waist 29, upper arm 12 1/2, thigh 21, weight 140lb.

From the very beginning Henry took weights seriously, working out four times a week at four hour sessions each time. This was too strenuous a schedule for the ordinary man and it was only his natural strength and previous athletic experience that saw him safely through it. But he did develop rapidly and that is what he wanted.

From an 80 pound benchpress he reached, in one year, the point where he could do 10 reps with 200 pounds. At the end of his first year Henry entered his first contest in Wales, placing third. In 1952 Henry left the Air Force and his concentrated training began.

The parallel bar and ring work built a good base for Henry’s shoulder girdle, which was notable for one of the most fantastically powerful upper arm, latissimus, trapezius and deltoid tie-ins on record. 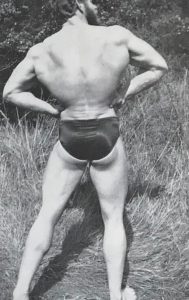 When Henry raises his arms above his head he reveals a most remarkable thickness in the convergence of the muscles under and behind his arms – muscles which bore the brunt of bar and ring work. A side view of his body under flexion shows an astounding development of the upper pectorals, deltoid and terres major muscles, making his chest extremely deep and thick. His trapezius muscles lie in a broad thick layer that thickens not only his shoulders but also his neck all the way to the point where it joins the skull base. All this development gives Henry incalculabe pulling power that enables him to handle top poundages for reps in his training and it another insurance of his ability to maintain the strength to handle the heavy weights he needs to use to further his development.

You may wonder what inspired Henry to start training, well it was a photograph of John Grimek, Steve Reeves and Eric Pedersen were his favorites. His favorite exercises are benchpress, bent arm pullover, back squat, lying triceps and kickbacks, because he has received more benefit from them than any other exercise. His hobbies were cerpentry and metal work and he used to spend a lot of time designing gadgets for his own training purposes.

To test his own endurance he once did 75 parallel bar dips NON STOP and 300 with breaks in 10 minutes. On the strength side he has done a 180lb curl, dips between benches with 200lb extra weight and dumbbell pullovers with 200lb on which he specialised for quite a while. He has never done any real power training as yet but he did receive some hints from Reg Park at the Mr. Britain contest. 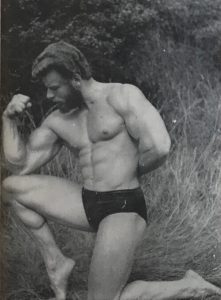