History of the Bench Press

The benchpress is the most popular movements today. But was used very little during the twenties and thirties. It wasn’t until the forties that bodybuilders began bench pressing. Back in the old days another piece of equipment that we take for granted today was not available but the trainees of the time did not lack for imagination in devising a way to perform a “bench press”.

The people laid on the floor and pulled the weight overhead onto his chest and pressed from this supine position. They called this style “supine press”, “prone press” or “belly toss”.

Early records are almost impossible to substantiate without universally accepted rules and regulations. Rules were usually discussed only minutes before the meet got under way. 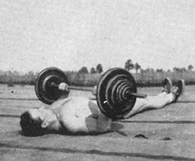 Press on back without bridge” (left) was performed much as the modern floor press is today. Another variation known as the “press on back with bridge” (right) was even more popular and was literally a barbell belly toss. Not surprisingly, much more weight could be raised when using this bridging maneuver. The men demonstrating the lifts in the above photos are Eddie Harrison (l) and John Grimek (r) 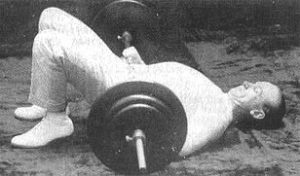 W.A. Pullum (pictured above) writes about proper British technique for the press on back with bridge: “Lying on the ground with the center of the bar immediately behind the head, the bell shall be brought over the lifter’s face until the upper arms rest on the ground. The heels may then be brought close to the buttocks, and the forearms inclined forward until the bar rests across the abdomen.”

“From this position the bell may be impelled to arm’s length overhead by a quick ‘bridge’ formation, but at no period of the lift shall the shoulders leave the ground. At the conclusion of the lift the arms and legs shall be straight, the buttocks on the ground, and the heels be brought together.”

First Press on Back Records 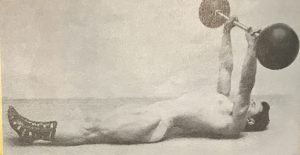 One of the earliest records of this style was by the wrestler George Lurich, who made it with 420lbs. 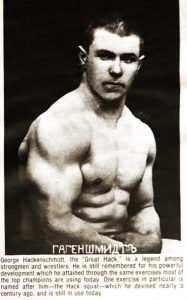 George Hackenschmidt, the famous Russian Lion wrestler, 1878-1968, experimented with lifting weights from a lying position; and back in 1898 on 2nd August, lying on the floor, he pulled a 333-lb barbell over his head and pressed it from dead start. He also pressed 361lb/164 for a world record.

There was no arching or belly tossing of the bar.  This feat was performed in Vienna and recorded in Hack’s classic The way to live, and was to remain a record for 18 years. 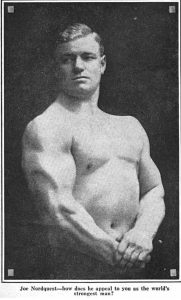 The brother of renowned strongman Adolph Nordquest, Joe (1893-?) lost part of his left leg in a childhood accident. This did not stop him from developing into one of the strongest men of his time: a left arm bent press of 277 lbs, a world record press on the back without bridge of 363 lbs in 1916, and a world record belly toss of 388 lbs in 1917. Sigmund Klein developed a powerful physqiue from such training, and – at 80 – he was still going strong.

Arthor Saxon had discovered that by arching in to a shoulder bridge, he could handle more weight. Saxon did 386lbs. (175kg).

Bill Lilly: because of his unusual flexibility, Bill could arch his back (weight held across his abdomen) so high as to get it to arms’ length without much pushing. He did to 484lb/220kg while weighing around 160 pounds himself. In those days, the early 30s, a few men could handle this weight but only in the deadlift.

Naturally, no one ever come close to Bill’s performance in this lift at that time, and not very many tried the lift since. It was Lilly’s specialty and he was the super champ at it. He did, however, practice other lifts, particularly muscling out weights. He was an exceptional handbalancer, too, but his shoulder bridge was his outstanding feat.

Just when did the lift go from floor to bench?
In the early 1930’s, Mark Berry’s classic training manuals Physical Improvement and Physical Training Simplified both published photos of pupils using a bench/box to press on. Racks to assist, however, were not in general usage and the era of special lifting suits and chemical aids was still far off.

Joe Weider’s magazine “Your Physique and Muscle Power”  recommended the bench press as a fine exercise for bodybuilders continually.

George Eiferman came upon the scene and filled the muscle mags with his tremendous thick pecs. In 1949 George Eiferman benched 250lbs, for 20 reps (not his best) for what may well have been the first bench press contest, taking a prize of 50 dollars.

Bodybuilders discovered that the more weight lifted, the more muscle was developed; and by the early 1950’s article after article expounded the benefits of bench pressing.

Interestingly, the bench press was to remain a somewhat controversial lift during the 1950’s.
The June 1957 issue of Joe Weider published a book:  “The Bench Press. Greatest Exercise of them all”  by ‘The Editor’, who suspect was Charles Smith.

Traditionalists called benches a ‘lazy man’s exercise’ or ‘cheating’ and suggested the lift ‘produced disproportionate development of the pecs and induced poor posture’.  Many articles argued against such thoughts and produced examples of the then to lifters who were using the bench press as an assistance exercise to improve their standing press. Named were Tommy Kono, Norberts Schmansky, Paul Anderson and Doug Hepburn.

Eventually benchpress become the status quo for the sport of powerlifting, however. 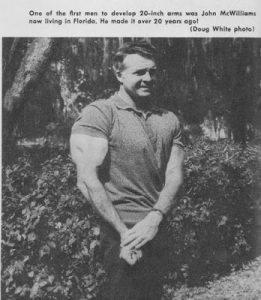 In those early days there were very few contests in which one could try his hand at bench pressing. Before the term Powerlifting came into use, competition involving the bench press, squat, deadlift and sometimes the curl and press-behind-neck.

The first men to bench press 400 pounds were Don Arnold, John McWilliams and Doug Hepburn. Not necessarily in that order, take your pick. It seems that all three hold that distinction.

First 500lb benchpress was published by Doug Hepburn (the other man in question was Reg Park).

Pat Casey was the first to make it officially under A.A.U rules (actual weight 515lb). This was performed in 1960 at a bodyweight of 259lb. Pat was 21 years old.

The ideal bench presser would have a barrel chest and short arms – thus the bar would not need to travel far.  By the same premise, wide grip benches were favoured, cutting down on distance.  Certainly this style was popular with bodybuilder Marvin Eder, a great star circa the 1950’s.

During that era Marvin was probably the lightest man to bench press 500lbs at under 200lbs bodyweight. He had benched 400lbs in 1949. Eder used a collar to collar grip, benching 510lbs at 197lbs bodyweight, again without aid.

Demonstrating further triceps power and a good assistance exercise for the bench press. Eder performed parallel bar dips with 435lbs plus his own bodyweight, a record to this day.

With the benchpress continually gaining popularity and practice and with better incentives, poundages rocketed. Benches were tougher, spotters better trained and targets higher. 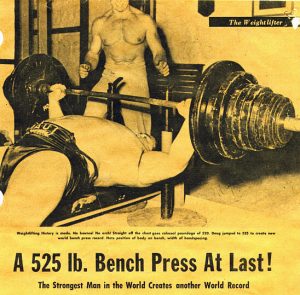 Doug Hepburn attempted 600 pounds in 1956 but the bar got out of the groove and it nearly landed on his face. Hepburn tore his shoulder quite badly and that was it, leaving up to Casey to break the 600 pound barrier. Hepburn’s best was with 555lb.In 1967, weighing 339 pounds, he benched 617 1/2lb, his official best. His best gym lift was 645 pounds and Pat’s style was always excellent.

Big Jim Williams and John Kuc have both broken into the 600 pounds class with Williams holding the record at 675lb at this time. Big Jim Williams is also said to have lifted an amazing 705lbs in practice in the York gym in 1970.  Witnesses included John Kuc and Bob Bednarski, who says it was a good lift devoid of bounce but was unfortunately made without the official recognition of judges.

The next big bench presser on the scene was Bill Kazmaier, with an official world record of 661lbs on 31st Jan 1981 with Bill being a muscular 330lbs bodyweight. Kaz, multi-winner of World’s strongest man contests and other meets open to all, sustained chest, shoulder and triceps injuries, ruling out further record-breaking poundages in the bench press.

But poundages in this test of manpower continued to zoom. Ted Arcidi, a former pro wrestler, took part in the superheavyweight class at the 1985 Hawaiian International Powerlifting Championships heaving aloft 705lbs and to prove his staying power was able to bench 505lbs for 21reps.

Ted’s first attempt at the bench press was just 4 reps with 170lbs!