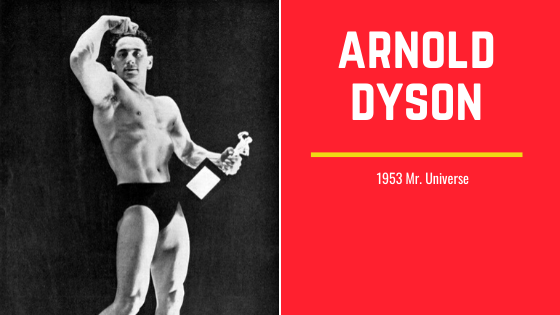 Arnold Dyson first commenced training in March 1948, just after being demobbed from the Army (rank S/Sgt. Drill Inst.) that was first first taste of weight-training – previously, from September 1947, he had done road work and general boxing training – he was fighting at 11 st. whilst stationed in Middle East Land Forces (Greece and Africa).

Unfortunately in November 1947, during a conest he broke a fellow sergent’s jaw and he sort of lost interest in the “noble art?”

His incentive to start weight-training was from seeing a cover pose of Clancy Ross, he thought at first that it was a faked painting but then he began to realize that you really could build a physique like that with progressive resistance – at least to him it sounded just plain common sense that the muscles must get stronger and bigger if continuously worked against increased resisitance. So he decided to get cracking on the weight as soon as he was released from the Army.

He was lucky enough to be selected as a Mr. Brtian finalist in 1948 – his first few months of training certainly paid off.

One of the first things he remembers upon joining his first club was that he was generally sized up and told that although he was fit – his chest muscles (pectoralis) were lacking in comparison to the rest of his physique – also his legs were very slim and they would prevent him from high honours in physical excellence contests!

His chest was over 50 inches and thighs 26 inches, calves 16 3/4 inches. Bodyweight increased by over 3 stones!

During the five years that he has been in the “game” he has had the opportunity of meeting some really swell fellows – for example Reg Park.

His first impressions when he saw Reg in 1949 was his quiet, unassuming manner. His terrific physique gave him more incentive to train all the harder in the months and years to follow.

Incidentally one of the things that strucked him as being rather odd was when at the different contests he entered he should see quite a number of regular faces, but their physiques seemed to remain pretty much the same year after year, and it was only by a chance conversation with one of the regulars that he discovered most of the contestants only started to train when a physqiue show and contest was shortly to be held.

He then realized that he was little different than most fellows who have to go out and work for a living and have wife and family to support – the main difference was that he was training week after week – regularly, not with sole purpose of entering and winning a contest, but for the sheer joy of improving his physique and the grand feeling of fitness that regular training brings.

He has known up-and-coming lads with excellent chances of winning major physique contests in a year or two’s time, stop training simply because they failed to win or even place in their first physique contest and never start again! Usually this happens to the youngster in his teens who has made rapid gains because of his youth, and then thinks it will always be as easy to pack on muscle fast, even in ten year’s time – of course only time itself convinces them that things aren’t quite that easy.

With regards to most of the “greats” that he has had the honour of meetin, and training with in some cases, their similarity is of course – regular training – and putting plenty of drive into their training sessions, getting down to the job in hand “Building their Physiques.”

According to Arnold Dyson there were a few popular “muscle writers” calimed that to be “too” serious about one’s training is a bad thing and that to chat generally lark about is much better than a quiet, seriours work out.

Mr. Dyson cited that it all depends on what you, as a weight trainer, have in mind – if you don’t want to bring your physique up to its best muscular size and shape.

In 1951 he was accepted as a contestant for the annual Mr. Universe contest – won of course by Reg Park – he was quite pleased with his showing and upon returning to Liverpool got cracking on a fresh schedule determined to improve his performance in thw 1952 contest.

Another year passed and then the 1952 Universe Show – in his height class he scored the same number of points as Corrie Pretorius (24) but was edged out by a 2nd vote of 4 to 3.

In a way he supposes he was glad because he had in mind not just a height class win – but the “Professional Mr. Universe” title outright. During the following 12 months he trained as hard as possible, but due to his work and different sales compaigns he couldn’t always get his workouts in – it’s tough going to get home from a hard day’s canvassing and demonstrating at 10 p.m. and then think about a training session – so being human, he missed a few work-outs on occasions such as these.

He was building his gym up – making equipment, decorating, wirting articles etc., but 3 months before the contest he really got dwon to training and packed on an additional 10lb bodyweight – this made him 14 st. 10lb – also he kept his definition (lugging washing machines from door to door took care of that).

Came the great day and he travelled down to London with his wife Doris accompanying him – their three year old daughter staying at home with his parents. 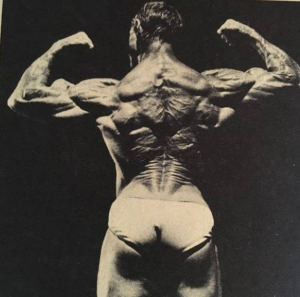 At the judging he felt pretty confident of putting up a good showing, the physiques that impressed him most, were Johnny Isaac’s (S. Africa) a newcomer who caused a sensation with his proportionate heavily muscled physqiue.

“I don not know how it feels to be “announced Mr. Universe” because due to a slip up his name got mixed up with Isaac’s and he was announced the winner.  I sppose as in the theatre business, the presentation of the award gives the winner just as big a thrill as the knowledge that he has won. I felt sorry for Johnnie, thinking he had won the title and then having to hand it over but no one has thought how I felt about it – especially when I received word from the organisers telling me that I had won by a wide margin.

Ah well, these things do happen but I hope especially in world contests class, that it doesn’t happen again. Will I now stop training? Not on your life! I am now determined to train all the harder and help others as well as myself buil up strong and fitter physiques – and maybe contest the Pro. Mr. Universe title again.”