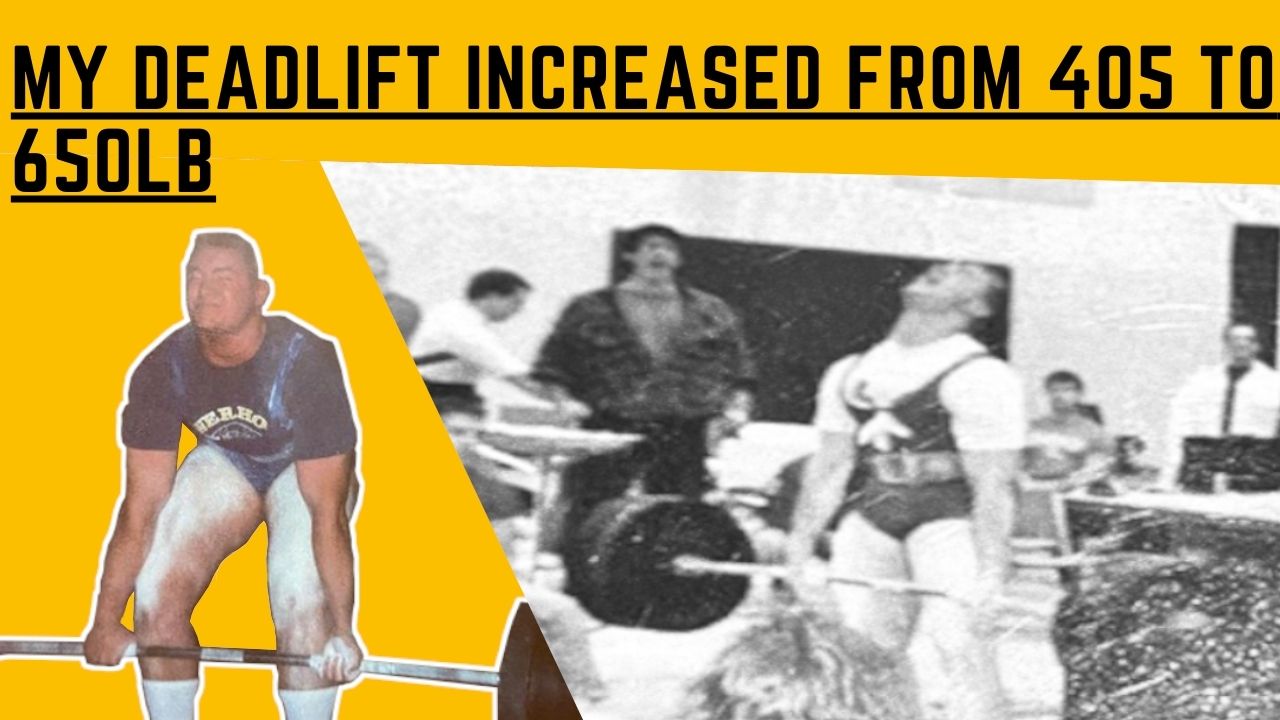 I lifted weights when began playing high school football in 1983. I played my last HS game, as the starting right guard, on Thanksgiving Day 1985, as my Boston Latin Wolfpack defeated Boston English in the game’s 99th meeting. While playing football, my best bench was 250lbs and my squat was 275 for 5. I never deadlifted while playing football. As soon as football ended, I began training at the local YMCA and noticed a posted flyer for a powerlifting meet to be held at the gym on January 11, 1986. I did the meet with two of my buddies and I squatted 315 benched 260 and deadlifted 405- the first time I tried it.

I trained my deadlift very traditionally back then, based upon Powerlifting USA Magazine articles by John Kuc, Fred Hatfield and Dr. Ken Leistner. I would deadlift up to a heavy set of 5 reps on the deadlift after my lighter, usually high bar squat workout. By October of 1986, I pulled 550 in a meet having pulled every week since January. In 1987, I injured my back by stupidly doing stiff leg deadlifts off a flat bench press- getting an extreme range of motion. To rehabilitate this injury, I read Bill Starr and Dr Ken articles about lower back rehabilitation. The rehab took all summer, coupled with an arduous physical labor job, took a while to heal my back. As 1987 was coming to a close, my back was better so I began to train hard for the USA Teenage East Coast Open held in Gaithersburg, Maryland, my last meet as a teenager. I over trained my deadlift and pulled 560, missing 600.

In the summer of 1988, I finally pulled 600lbs, but I had not lived up to my personal goals. I began researching training and had some great, more experienced partners who gave me advice. I settled on a low repetition program after straining something in my back trying to rep 500 pounds for ten reps. My posterior chain was strong yet I learned that I would strain ligaments if I tried for too many repetitions – over 5, in the deadlift.

By 1989, I knew that working up to a heavy triple worked best for me. In 1990, I was training hard and in good shape, having tripled 590 in the deadlift, ten days before the USPF Region 1 Championships in New Hampshire on February 10th- the same day Buster Douglas knocked out Mike Tyson. I won the Junior (Under 23) Men’s Open Division with lifts of 589 359 639. Six weeks later, I entered the 1990 ADFPA Collegiate National Powerlifting Championships at Virginia Tech University.

I squatted 600 benched 365 and deadlifted 650lbs at 237lbs. I came in 3rd overall in total and the deadlift was a Collegiate and American national record, beating the record of Randal McDaniel who went on to the NFL Hall of Fame.

My training for the deadlift back then was simple in that I focused on heavy triple once per week. I would pull on Wednesdays after light high bar squats. Bent over rows were my only assistance work, done for reps of 5 with a belt.

In 1986 Doyle Kenady, multiple time world powerlifting champion broke the deadlift all time world record with 903. He tried a 920 and just missed. He also squatted 847 and benched 547 for a 2293 total. He just missed a 887 squat that day. After this performance, the great Fred Hatfield wrote articles that detailed how leading up to the meet, they trained together and Doyle did an 895 triple in the deadlift. That is where I realized triples suited me well as an intermediate puller.

During the same time period, my official squat went from 315 to 615. I followed a typical progressive overload style most of the time when I was preparing for a meet, with 3 weeks of 5 reps, 3 weeks of triples, 3 weeks f doubles, and two weeks of singles, peaking at the meet in 12 weeks. In the offseason, I followed Dr. Squat’s high bar program with lots of close stance with a belt only for sets of 8 reps with as much weight as possible with good form. I am 6’2” with a long back, so squats strengthen my conventional deadlift- the only form of deadlift I have competed with. There were training blocks during this time period where I would do Dr Ken Leistner high repetition squat sets to build muscle and mental toughness. The best set I ever did was 315lbs for 20 repetitions with a belt at 240lbs bodyweight- not too impressive as my cardio was not great.
I did not do much abdominal work in the gym, but for the first two years of this period of time, I studied American Style Taekwondo. This training was intense stretching as well as some abdominal training to support kicking power. I am sure this regime helped me stay injury free and led to my general physical preparedness, a term I would not hear until 7 years later, being very high.