How Often Should I Bench Press? Big Jim Williams Will Explain! 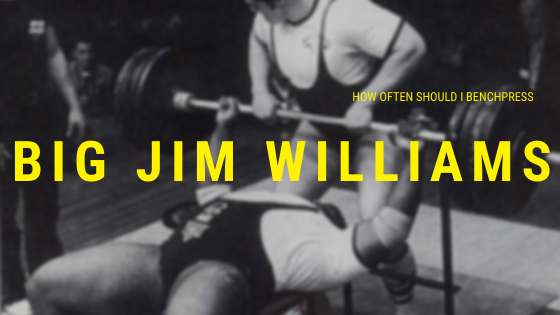 A question that is old as greek Mythology, and contemplated by every avid powerlifter since powerlifting was conceived!

Big Jim Williams’ quick answer would be five or six days a week, or a 13 days straight for style and endurance.

Why should I lift more than twice a week?
The first time Big Jim contemplated bench pressing every day, he was told that it was a foolish, non-practical idea and that it just won’t work out! A good friend said take it to bed and sleep on it, but he learned fast that nothing comes to a sleeper but a dream. The more Big Jim thought not to train his bench press everyday, the more convinced he became to give it a try.

He thought of professional people such as surgeons, carpenters, football players and lawyer, etc. What if they practiced their professions only seceral times a month or year. Could you imagine what would be taking place?

No need to answer that, because we know that it requires concerted and concerned effort by all who are involved in order to succeed. 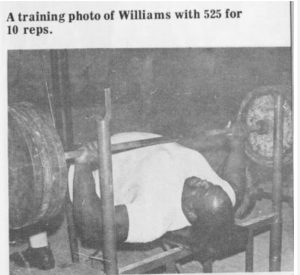 One argument Big Jim find against benching every day is that fellows believe that a big arm is all they need, therefore more time is spent on arm routines than they spend training the bench press. When these men try benching the second and third day, this is when they run into difficulty, with fatigued arms that will not stand the pressure.

Mind you, big arms are great, but arms will not take the place achieving a drive-line style in the bench. A big bench encompasses thick lats, good pectoral development, strong deltoids, nice arms, psyche, nutrition, education and a good 5 to 6 day routine.

Actually, one should get either in a quiet mood or with a close lifting partner and spend time each day thinking out his position of the bar overhead, and where it should land on the chest and his timing response.

Then you have that age old excuse used by most lifter that because they do heavy squats and deadlifts, it almost invariably affects the muscles in the shoulder girdle, thus rendering their bench press below their desired dream.

If this is true, it’s only because they are weak in the bench from not doing them enough anyway.

According to Big Jim Williams the chest cavity is enhanced greatly by squatting, so then again, you can see the frivolous argument against not bench pressing daily.

Squats are definitely an asset to a stronger chest cavity, but if you don’t do a deaf ear. Also, many lifters have confused fatigue and injury. When you don’t really know the difference it’s easily done.

Big Jim knows himself that many lifters have complained to him of injured deatls, and at most, they were fatigued from the lack of an edurance routine.

Just think, we use more than 60 odd muscles to perform the bench press. One can imagine how much more comes into play just to do one squat, plus we squat with more weight than we bench press.

So, if  we use more weight to squat with, and can do it two or three time a week, then why should anyone think that 5 to 6 times is too much to bench!

Bench pressing is like anything else, you put in a little – and that just what you get out – “A LITTLE”.

According to Big Jim your muscles can stand it; you have been uniquely constructed. If muscles woould repsond as easy as a lot of people would like to believe, just the mileage you have put on walking since birth would render you the biggest legs ever, but we know that is not true.

It takes an awesome amount of work, and unless you are ready to take the chance, your chances for a big bench are nil.

Big Jim has at least five different bench routines that has worked for him, and with this variety, he was able to ward off staleness.

He has found out for himself that twice a day benching will, most of the time, enhance the second workout.

The first workout sets his muscles and leaves them well heated, and directs his style and all that is left in his psyching.

You will find out, if you have not done so already, that the only way to lift correctly is through practice; practice makes the perfect and perfect can only come by practice. There is not too much you can do to your muscles, if you first work correctly. Injury comes mainly from doing what you have never practiced, and in a forced situation you sustain injury.

With this in mind, how could anyone think that a two day routine can accomplish anything. Of course, you always have the gifted lifter who does not have to train regularly, but je too meets his match against skilled lifters and forced situations.

It is necessary, without a doubt, that to become a class lifter one needs countless hours of training to accomplish the desired results, or he is just fooling himself.

Bench pressing calls for a unique style and brute strength, and neither of these can be attained on a two day week program. Good bench pressers that count on continued gains, must be perfectionist about their work.

Big Jim Williams emphasized a problem that has gone observed. He does not think the bench press is receiving its due, because of the fact that there are gew mechanical devices or material masquerades that can be used to enhance the bench movement.

Therefore, it is somewhat overlooked and undertrained by many. The squat and deadflift devices have in this case rendered the bench press almost to the point of being unpopular.

Suits of every description, shoes, ballet slippers, tight wraps and a four inch belt are offered and they are very advantageous. They may bring many pounds to the lifter’s total, which means fewer training hours and weaker tendons (they may leave you accident prone.) Your total may be up, but you may not necessarily be stronger. The bench press is the proof of it, as it lays far behind compared to the other lifts. 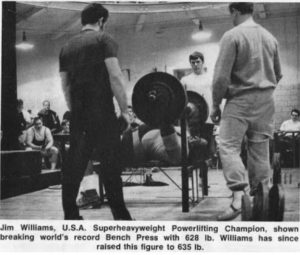 PROOF: Since Big Jim has bench pressed 675lb officially, and 705lb unofficially, and has done 720lb in the Scranton Y.M.C.A. and these lifts remain some of the longest standing records to this day, many years later. In many of the classes, as Big Jim said before, the bench is lagging due to its being undertrained, and the right routines have not been implemented.

Big Jim broke a bench press record every time out, whether local, state, national, American or world, only because he was thorough in training the bench press. From his training method and the repidity with which he performed them, he could look at a bench press and tell you whether it was done with style or just plain brute force strength.

This comes from countless hours of practice and medition about what you are doing. Strong bench pressers can bench press naturally because they are strong, but they may even bench less than a drive line style bencher, because of being uncomfortable and not able to determine a style.

Understand now, they may be able to repeat a hard press, but they seldome make a big gain. They count more on their strength and do less techniques.

This alone will make them bench less, therefore, robbing them of the big one.

Big Jim has taken 100lb jumps with confidence because of his awareness of the bench press. he has also opened with 650-700 pounds and bombed, but his percentages from benching regularly are a lot better than a stronger bencher, who, if he is off that day, may blow it entirely.