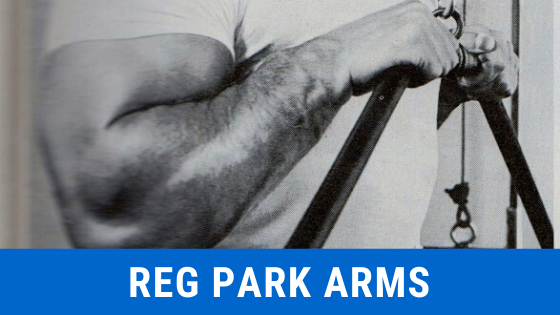 Every bodybuilder admires and wants bigger arms. To date, the largest arm measured Reg Park has had were 20 1/2 inches at 235 pounds bodyweight.

According to Mr. Park if you are already in fairly hard muscular shape, it will be impossible for you to increase your arm size unless you increase your bodyweight. So, if, after having looked at yourself critically in front of the mirror, you feel either lean or in pretty hard muscular shape, then you must make up your mind to eat and drink more in an effort to add those necessary pounds to your bodyweight. If you are genuinely overweight and smooth in appearance, then regular, hard training will help you to increase both your arm size and overall muscularity. It will probably not be necessary for you to eat and drink more, but rather to train more diligently and eat more carefully, with the emphasis on protein..

These seven different exercises are the one Reg Park was following in the 50s. Have fun – Mr. Berg 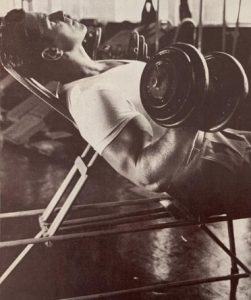 most famous for pressing exercises, is also ideal for performing a variation of the alternate curl which will make your arms throb and pulsate with huge size and power. Illustration #1 shows the starting position. From here lower right arm and curl the left arm. Perform 10 repetitions with each arm, making the movement smooth and steady. Repeat the exercise three sets. 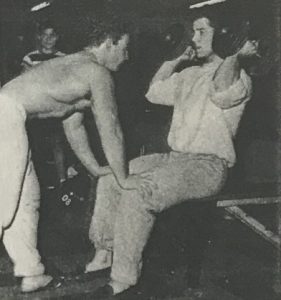 The seated two arm dumbbell curl is next. Shown in Illustration #2, the bells are curled together from the thighs to the shoulders. Take advantage of the sectrets of the champions and swing a little in this exercise to permit you to use more weight and in this way to fill your biceps with great power and form. Perform three sets of 10 reps. Make sure that you have a feeling of bulging size from this exercise. Your biceps will have to be pumped up full and firm if you perform it correctly as explained. 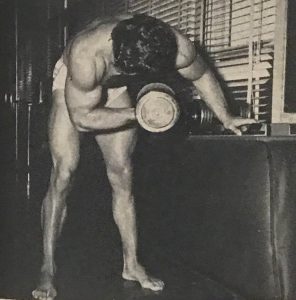 Now for the finishing touches on your biceps routine. Make careful note that by performing all the biceps exercises at once. By doing all your biceps exercises, one right after the other, the biceps become flushed full of oxygenized blood and the muscular processes get stepped up to the maximum. This means more and faster growth and better shape.

Illustration #3 shows the concentration curl. Start with the arm fully extended toward the ground. Now, while consciously tensing the biceps muscle, curl the weight as shown. Think hard about the tensing of the biceps and exert a force of will to make it contract as forcefully as possible. Perform three sets of 10 reps each arm. 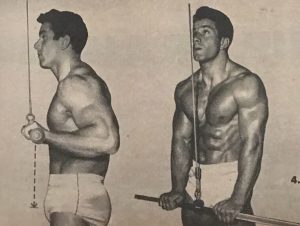 Now we will go to work on the triceps to make them large and full, and etched deep with that impressive horseshoe formation which denotes complete development. According to Reg Park the press down using a lat machine is one of the greatest triceps exercises ever practiced. It was brand new to him when he first came to America.

The first time he practiced his triceps became sore and stiff. To start the exercise pull on the bar of the lat machine until it is in the position shown in illustration 4. Now, keeping the elbows close to the side, push down on the bar until it is all the way down as shown in Illustration #5. Still keeping the elbows close to the side permit the bar to raise only as far as shown in Illustration #4 and repeat for three sets of 10 reps. 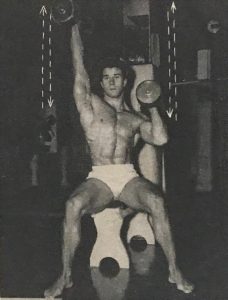 The seated alternate dumbbell press will give you real POWER in the triceps. Start as shown in Illustration #6. Now press the left hand to above the head and while doing so lower the right arm. Repeat for three sets of 10 repetitions each arm. 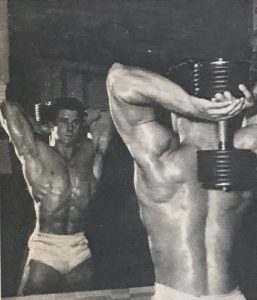 Even while in England the dumbbell press behind neck was favorite of Reg Park. Start as shown in Illustration. Now press the dumbbell to above head. Lower and repeat three sets of 10 repetitions each. 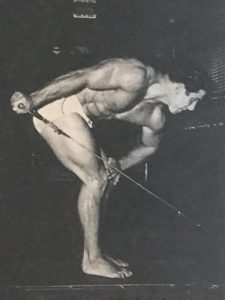 Here is another great exercise which will give you tremendous triceps defition. It is performed with a wall pulley. The pulley must have a floor attachment so that there can be an upward and backward pull. To perform the exercise, grasp the pulley handle, keeping the upper arm close to the side. The arm is bent at the elbow towards the front, similar to the one arm curl position. Now straighten the arm to the back as shown in Illustration #8. Repeat this exercise three sets of 10 repetitions each. Just look how the triceps is so clearly defined in the exercise illustration to give you some idea of how powerfully this movement influences that muscle.

Sleep
Those of you who decide you need more bodyweight if your effort to obtain bigger arms should endeavor to get at least eight hours sleep each night and more if possible. Remember also, not to stand if you can sit and not to sit if you can lie down.

Other Sports or Physical Activities
The lean or muscular types should cut down and, if possible, eliminate all other forms of sport or physical activity if they are desirous of stepping up their bodyweight with an aim of building bigger arms. All possible energy should be saved for the job at hand – that of moulding more massive arms.

Performance of Exercises
According to Reg Park regardless of what arm exercises you perform, you must do them in strict style. There is no point in performing dumbbell curls which look like dumbbell cleans, and then being upset because your arms do not increase in size.

The function of the biceps muscle is simply to bend the arm over its complete range of movement and the function of the triceps is to straighten the arm. Therefore, in order to obtain increased arm size, it is necessary to perform biceps and triceps exercises with as heavy a weight as possible in the strictest style possible and over the most complete range of movement possible without the other muscle groups being called upon to assist, as is the case when performing exercises in a loose style. Stricter performance results in fuller development.

What Exercises to Perform 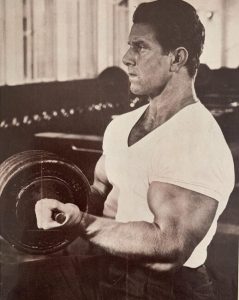 The actual exercises that YOU perform are really a matter of personal preference. The most important thing is that both the biceps and triceps should feel pumped and congested upon completion of your arm workout.

Concentration
When exercising the arms, remember that the more concentration you give them in both thought and movement, the quicker and bigger they will grow.

Summing up
If you eat correctly, rest sensibly, sleep sufficiently, exercise diligently and concentrate deeply, you can well be assured that a pair of big and power arms will be your just reward!
source:
July 1956 MB
S&H May 65