How To Benchpress by Big Jim Williams 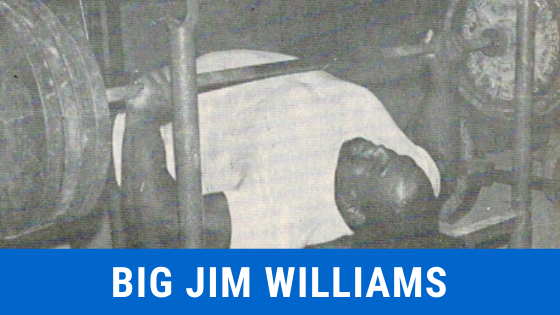 Mr. Williams is one of the first black men to establish himself and a world record holder in powerlifting. Jim Williams said that he bench pressed 600 lbs (272 kg) before learning about steroids. He has been lifting weights since 1966. Furthermore he has done 25 powerlifting meets and won 21 of them! In this article you will learn the proper bench press set up and technique by powerlifting champion Big Jim Williams – have fun, Mr. Berg!

According to Big Jim most lifters know little or nothing at all about the art of true bench pressing although it is the easiest of all the power lifts to do.

Big Jim watched dozens of lifters training, and after talking many hours to them by telephone, he has found that the bench press is the least practised. Many power lifters appear to suffer from a mental block when it comes to holding a great weight over their heads (and they have every right to be afraid).

If you don’t train physically, how can you get up mentally? This is like asking a shot putter to run a four-minute mile on the track.

The benchpress is really broken down into four major parts: (1) The take-off from the rack. (2) The Descent, or rate of speed of the descent to the chest. (3) The body position on the bench. (4) The press from the chest.

You say a good tricep is easy to come by? Yes, if you are talking about a “good looking”, but what about a hard tricep relaxed? This can only come from a good bench workout, followed by a good tricep workout, mostly tricep press downs in sets of heavy 6 to 8 reps.

You will have to repeat this, without let-up, for months on end. The reard will be to be strong at anything. You will experience times of no progress, sore arms, but you must carry on.

Big Jim Williams mentioned the chest or pectoral muscles (not his chest over 60 inches). Your constant bench pressing will help take care of this, along with pullover pressing plus some incline and decline pressing.

You can probably see the developing of the arms with the chest already in your mind. Next we will fit the thick lats to the chest. From the pullover pressing the lats have started to grow and extened. But a standing lat pull to the chest will work wonders.

The deltoids can be difficult for those who don’t know how to build them. The fron sections of the deltoid can be built by pressing the bar overhead in the ordinary way, but we will substitute the lowering and raising of a 45lb plate ( or weight to suit you) in front with straight arms for 10 reps – 5 sets a workout. For the sides of the deltoid we will have you bend over straightlegged and swing a pair of dumbbells out horizontally, then lower slowly, from the same position swing the dumbbells to the rear while still bent over.

This is harder and most people shun awkward positions. Seated dumbbell and seated presses, along with pressing behind the neck, are also good (Remember the real secret of growth is the extra rep.).

As you can see we have built the upper body of a man and have not touched upon the know-how of the bench press.

Big Jim Williams would suggest everyone starts at the 16-inch mark, which is the beginning of the knurling on the bar, from the blank middle.

From here you move to a comfortable position. You will find that the bigger the chest and the bigger the triceps and deltoids, the further out you can place your hands.

You will also find out that a man with big triceps can take the wide grip and count in his chest and deltoids to get the bar started, which will be slow, but what an easy lock out. Those who lack chest power to start a big lift should start fairly close where the triceps will give you one heck of a start, but the lock out is much harder to complete. So far we have built a man’s chest, arms and shoulders and have even placed his hands on the bar, but the lift has not yet started:

(1) The bar should be lowered slowly to chest peak. What is a chest peak? Just befre the weight is in descent the chest should be filled and held high. Now as the chest is gilled and raised by the normal arch, this will form a chest peak.

The bar will be held partly by the arms and partly by the chest peak. A clap from the referee and the weight is thrust with all your energy to arms’ length.

The bar should travel out about an inch from the start and as it climbs upwards goes back slightly toward the uprights.

(2) Position on the bench is important. Your eyes should be an inch behind the level of the bar.

(3) Place your feet in a comfortable position, then forget them and concentrate on pressing the weight.

There is no substitute for bench pressing but the bench pressing itself, and more bench pressing. You have to do heavy overtime through pain and sweat! it may sound rough, but from the first time Big Jim bench pressed 600lb until the present, he has pressed in excess of 600 plus over 600 times.

He benched on an average of 600 plus 70 times in three of his four training months. He went to two meets yearly, sometimes three.

According to Big Jim benchpressing really has a big mental factor. If you can beat a weight mentally, you can, with training, beat it physically. The beginner must bench daily and he must follow the whole plan laid out for him in this text.

As he progresses to senior ranks he should cut back to a limited poundage, limited rep, routine rep routine.

The idea is to get to your max with a complete warm-up and not get tired. Big Jim used the 19-21 rep routine.

That’s the benching for the day, and this can be repeated daily because Big Jim is through before most guys started.

The secret? They may do (4) more sets than Big Jim and 30 more reps, but how many can do this five days a week?

The overload system has also worked well for Jim and his training partner, superheavyweight John Kuc. John dies with Jim’s help in the centre of the bar, up to 700lb with forced reps.

John has to be the best up and coming bench presser in the business.

Joe Leonardis, 185lb champion, worked out with Big Jim and did 415lb in training, caming up from his previous best of 375lb. Joe While went from 470lb and after a three-week session with Jim went to an easy 540lb. Isn’t this progress?