How to Build a Powerful Neck? Explained by Mr. America Don Ross! 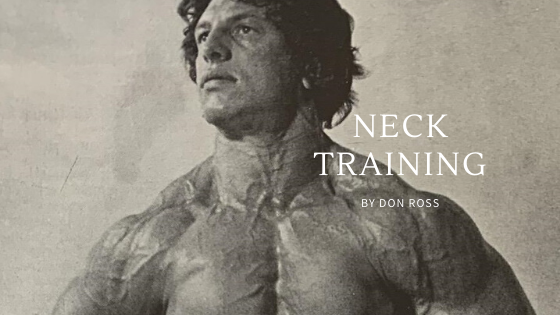 America’s Most Muscular Man 1975-1976 will explain how to build a powerful and thick neck! Have fun! Mr. Berg

“What is the most neglected area of the body? Without a doubt, it has to be the neck. Football players, wrestlers, boxers and other athletes know the importance of a powerful neck. This acts as a shock absorber to prevent injury. It enables the athlete to literally “use his head.” Examples: blocking in football and bridging to get out of a predicament in wrestling.

What is the importance of a thick, strong neck for the bodybuilder, or for that matter, the average fitness buff?

First of all, as in the case of the athlete, as a safeguard against injury. You have no doubt head of athletes who survived serious automobile accidents because of their strength and development. Whiplash and other neck injuries happen by the thousands in otherwise minor accidents.

Many of these would not have occurred in the victim had some degree of neck development. Even in the gym, there are many cases of stiff necks and pulled neck muscles as a result of weakness in that area.

There is another reason for neck building. It improves a man’s appearance greatly. Even an advanced bodybuilder with 20″ arms looks very unimpressive in his winter coat unless he has a neck to match the rest of this physique.

In spite of this, Don Ross has read articles by trainers advising bodybuilders to refrain from any neck work to make the shoulders look wider.

This makes about as much sense as never doing any leg work so your upper body will look bigger, A skinny neck on a bodybuilder stands out like the proverbial sore thumb.

Look through any bodybuilding magazine and notice the neck development on the physique men pictured. Don’t the ones with the spectacular upper bodies, but no neck development look obviously lacking?


Does not it make you wonder how some men can win National bodybuilding titles while their necks look like toothpicks in comparison with the rest of their development?

Fortunately for those of us who don’t want to be “Pencil neck” bodybuilders, the neck response quickly to exercise.

There are neck harnesses on the market, but these may be awkward to used. According to Don Ross the only equipment you need to build a bull neck is a towel, incline bench, a pad (or piece of) foam rubber, and a few weights. 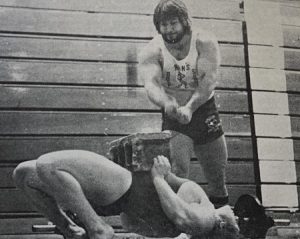 The wrestler’s bridge is the most effective way to build the back of the neck. This will eliminate the lightbulb shaped head that many people start with. To begin with, get used to the pressure on your neck.

Lie on the floor with your head on the pad. Bridge up on your head with your back arched and feet under your knees. Keep your hands off the floor. Stay in the bridge for one minute. If you can only stay up for a few seconds, it’s all right. Increase your time each week. When you are up to three minutes, it’s time to advance to bridges with movement.

Rock back and forth on your head. Eventually, you will be able to start on your shoulders and bridge up to the top of your head for reps.

As soon as you are able, begin to use weights. Hold a plate or light barbell over your chest as you bridge from your shoulders to the top of your head.

The sterno-mastoid muscles give your neck width when viewed from the front. To work on these, do resistance movements with a training partner. Sit on the incline bench.

Fold a towel until it is about two inches wide. Place the centre across your forehead. Your partner is standing behind you holding the towel on either side of your head. Have him apply tension throughout the movement as your bring your head forward until your chin touches your chest. Keep your shoulders against the bench. Do three sets of 15-20 repetitions.

Train your neck three days a week. This is not a very long program and will only add a few minutes to your routine; those few minutes will be well worth it!!”