How to Bulk Up Quick in The Gym and Kitchen 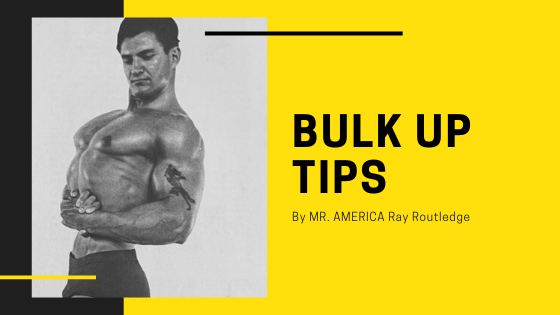 US Army Bodybuilding Champion ‘Ray Routledge’ will reveal his secrets about gaining weights with proper exercises, nutrition, sets and reps. He used to compete in the 50’s, 60’s and 70’s and won the most prestigious title MR AMERICA (1961). The following oldschool diet course was written in the year 1962 by Ray Routledge! – Mr. Berg

“Contrary to the widely held opinion of many bodybuilders, gaining additional bodyweight is primarily a matter of nutrition, not specific training methods.

Proper diet is the key to gaining weigh. True enough, there are a few bodybuilding exercises that do stimulate body growth and body functions, and these should be included in any weight-training program where the bodybuilder or athlete is trying to add muscular bodyweight to his frame, but these exercises alone without changes or additions to the diet will not be effective.

Three exercises helpful for gaining weight are the full squat with very deep breathing, straight arm pullover with barbell or dumbbell, and the heavy bench press with a wide collar-to collar grip. These three are power exercises which really make the bodybuilder expend vast amounts of energy.

This hard work and the demands it makes on the body stimulate the appetite. Consumption of extra food, even without exercise, will add bulk to the body.

Exercise, because it does stimulate the appetite, thus play its role in adding weight to the body.

The old school of thought was that the bodybuilder did low sets and repetitions in his training and this produced bulk to the body frame. This system, of course, did not accomplish anything but increase tendon and ligament strength. Furthermore, low sets and repetitions fail to work muscle tissues properly and produce more strength than actual muscle growth.

When the bodybuilder consumes his daily “bullk” requirements of food, he should be careful not to gorge himself at every meal time. For a trimmer waist line, it would be better for the athlete or bodybuilder to eat smaller amounts of food at meal times and eat more meals throughout the day.

The “bulk” enthusiast can do one of two things: he can either nibble food all day long, or increase his meals to four or five a day. This way the stomach will not be stretched out of proportion and the athlete or bodybuilder will not have that constant stuffed feeling.

As diet is the most important single factor in gaining extra bodyweight, I would like to point out the types of substances needed in a good “bulk” diet.

Therefore it would be beneficial to the “bulker” to acquaint himself with these types of foods. It would behoove the bulk advocate to obtain a book or pamphlet that gives reference to calories and carbohydrates and which foods that have the highest calorie count.

This book or pamphlet can be obtained at any library or health food store without cost to the reader in most cases.

I am not suggesting that the bodybuilder or athlete eat only these foods that have the highest calorie or carbohydrate count because this would be absurd.

It has been scientifically proven that the human body functions better with a well-rounded diet.

However, those fellows desiring to gain added bodyweight must lean towards a high fat, high carbohydrate diet.

In consuming liquids, it is better not to take them with the meals as some authorities feel this hinders the body’s digestion processes and that the food consumed with the liquid is not fully utilized by the body. Besides drinking liquids while eating kills the appetite and the eater has difficulty finishing his meal. Thus it would be better for the athlete or bodybuilder to drink liquids between meals or in the evening after the last meal.

Added food and liquid consumption without proper exercise will cause the body to appear much too fatty and bloated. With proper exercise the bodybuilder can make his body appear strong and massive and yet avoid the “fatty” look. This is done by keeping your repetitions fairly high, but not too high, as too high repetitions will defeat the “bulker’s” purpose and burn off too much bodyweight. The bulk advocate must keep his repetitions around eight to twelve, not going over this latter number.

If he does not too low a number of repetitions the trainee will not hold sufficient separation and skin tone that are needed for the “firm” look with the added bodyweight.

Care should be taken that the bodybuilder or athlete does not “overbulk”. By overbulking I mean adding too much bodyweight. When this happens, two things will result: The bulk advocate will look too stuffed, and the bulk will hinder the power of the trainee by making him feel too sluggish during his training.

Once these stretch marks appear, they do not disappear and will stay with the weight trainee the rest of his life. These marks are unsightly and can be avoided gradually increasing one’s diet over a period of time.

I would like to stay at this point that an added ten to twenty pounds bodyweight to the bodybuilder’s or athlete’s frame does make him look “more massive” and give him added power in his exercises.

This is all well and good, but there are those who become extremists and become “mass bounds” This particular type of person will sacrifice everything for more and more added bodyweight to his frame.

Even though the “bulk advocate” is fairly young, this can cause considerable damage to the organs and inner workings of his body. This damage can give the weight enthusiast untold physical disturbances later on in life. This has been substantially proven by leading medical authorities.

With all this in view it is hardly worth appearing “gigantic” to your fellow contemporaries.

I am not trying to discourage those who would like to pick up a little extra bodyweight or the added strength that goes with it. I am directing my thought who try to gain from 25 to 50 pounds and over.

If the weight trainee desires to gain extra bodyweight, he must refrain from doing any extra strenuous activity that would burn up important bodyweight. He must avoid expending energies through other channels, such as extended walks or hiking, sports that require running or jumping etc. The “bulk advocate” must be ever conscious and concentrate on conserving body energies.

One of these ways of conserving precious energies is to get sufficient rest at night. Sufficient rest means eight to ten hours of uninterrupted, restful sleep. To insure restful, uninterrupted sleep, the bulk advocate should have a bed large enough to stretch out fully and extend his body limbs.

His sleeping place should be away from all outside noises that might disturb a restful sleep. It is very possible to lose three to six pounds in one night of poor, interrupted, restless sleep.

In conclusion I would like to say that the bodybuilder or athlete on a bulk diet can eat anything and everything. He must, however, insure that he consumes enough good protein along with the carbohydrates so that he can build maximum muscle tissue.

This, of course, is the primary purpose of bodybuilding. I hope by reading this article I have made the reader understand a little more of the mechanism of weight gaining. I have bulked up many times using the prescribed methods in this article, and I know that they will give positive results. I do think however, that gaining weight takes time and the athlete or bodybuilder should not expect miracles overnight. He should experiment with his diet, using the trial and error system to find out how the increase in diet affects his particular body system. Best of luck, and may added muscular bodyweight be yours through proper dieting and progressive weight training.”