How to use lifting straps by Tommy Kono 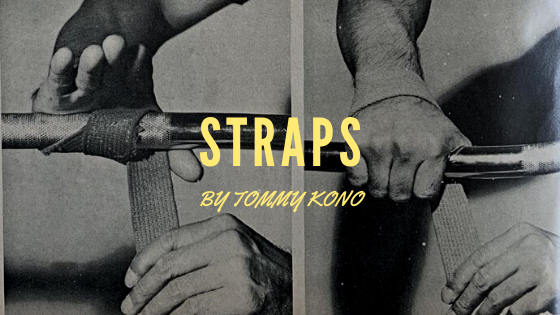 Tommy Kono, a weightlifting gold medalist, tells you how to use hand straps to get most out of exercises. His advice is aimed at all of the big three – bodybuilders, powerlifters and Olympic lifters.

Ever use straps in your training? If you haven’t, you have missed out on one piece of inexpensive training paraphernalia which will add pounds to your Olympic quick lifts and develop wider and thicker back and shoulder muscles. Powerlifters can also greatly benefit from regular use of this simple piece of equipment.

Straps of one sort or another have been used for a number of decades by lifters and strongmen yet very little is known about their benefits and use outside of a selected group of present day strength athletes. The value of their use is no secret to leading lifters and coaches; however, little has ever been written about them or have their true merits been emphasized. Tommy Kono don’t recall ever reading where their use was stressed for the benefit of the bodybuilders.

Let explain why the straps can be such a boon to lifters and bodybuilders. A weak grip or small hands or a combination of both can prevent barbell men from using heavy weights in training.

The straps enable you to concentrate more fully on the exercise movement or lift, as the case may be, rather than having to detract your attention from the movement because of a weak grip.

Secondly, the straps are so easy to use and so inexpensive that if you desire maximum strength and development of the back muscles and shoulders, you would be depriving yourself of these qualities without it.

STRAPS FOR WEIGHTLIFTERS:
Straps are a “must” for weightlifters. For practicing various types of high pulls with extremely heavy poundages the hook-grip alone cannot be relied upon.

You could also save many a “smashed thumb” feeling with its use.

One of the best reasons for using straps other than that of being able to hang onto the bar without any thought of the bar slipping out of the hands is the fact that you can concentrate on using your arms as “connecting links” for pulling the bar.

The use of straps will aid you in starting your initial pull with the larger and stronger back and leg muscles rather than with the arms.

In 1957, just two weeks prior to the Sr. National Championships in Daytona Beach, Florida, Tommy Kono injured his left hand in a freak accident. The load of five musclemen titled the Cadillac in such a way that the car door slammed shut on his third finger, splitting the fingernail lengthwise. Until he was rushed to the hospital and X-rayed, he thought the bone of his finger tip was smashed.

The injury prevented him from gripping the bar tightly at any time, lest the pressure would make it bleed. Even pressing moderately heavy weights off the squat stands with his left hand in a cupped position proved to be painful.

The only alternative he had to retain his pulling power was to practice a lot of high pulls employing the straps and just his thumb and index finger of his left hand to hold the strap in position.

According to Kono this practice paid off for at the Nationals not only did he win the lightheavyweight class but also established a Sr. National meet mark in the snatch. The use of straps prevented the loss of his pulling strength and also helped him pull correctly.

Some of the leading lifters in the world make very good use of straps in their training.

Serge Lopatin, the Russian lightweight, cleaned 374 pounds in training back in 1961 when the world record in his class was 352lb. Featherweight Udodov of Russia pulled in 324 pounds in the clean prior to 1956 and the world record then was 314. Even heavyweight world record holder Yuri Vlasov of the Soviet Union with his large hands uses straps for practicing the pulls. Lightweight Olympic champion Baszanowski of Poland uses straps even in warming up for a contest so he can conserve his hook grip and hand strength for the actual competition. 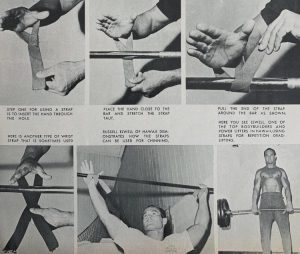 STRAPS FOR POWERLIFTERS:
During the U.S. Olympic team’s stopover in Honolulu in 1956, on the way to the Melbourne Olympics, several training sessions were held by the weightlifting squad at the Nuuanu YMCA.

There, with the aid of special straps which had iron hooks attached to them, Paul Anderson was able to perform a partial deadlift of 1,000 pounds. Doug Hepburn of Canada had similar straps, also using metal clips to cup the bar for performing deadlifts and high pulls.

Metal hooks and clips are good for slow movements but for pure simplicity and ease of use for varied exercise movements you cannot beat the straps made of canvas or nylon webbing. For developing maximum deadlifting ability you must use straps in your training.

STRAPS FOR THE ISOMETRIC MAN:
Straps are indispensable for performing any type of pulls on the Isometric rack. You cannot concentrate on exerting your maximum pull if you do not use straps. Whether it be partial movements on the York Power Rack or pure isometric pulls, the power you can generate against the bar is limited by your ability to hang on to the bar, no matter how great your back, shoulder and arm power.

All those who work on the Isometric principles or use the Power Rack for limited movement will not get the full benefit of the pulling muscles if they do not use straps.

According to Kono you would be losing a 20 to 30 percent benefit on your pulls if you do not employ the straps.

STRAPS FOR BODYBUILDERS
Those who fail to isolate movements for the latissimus dorsi muscles when performing exercises such as chins, rowing motions, or the lat machine pull-downs or who cannot handle heavy weights in these exercises because of a weak grip can really develop the “wings” by using straps.

Tommy Kono used to know a lot of builder who could perform 50 wide-grip chins at a time without showing any appreciable development of the back muscles simply because he used his arms to pull himself up al the time.

No matter how many sets of rowing motions, lat machine pulldown and chins he performed he couldn’t get a decent “pump” of his latissimus muscles.

He couldn’t even perform a deadlift without first starting the lift with his arms. Even to perform shoulder shrugs for trapezius development his shoulder girdle would hardly move. Instead, his arms were flexing to get the weights higher from the hanging position. He was the only person Tommy Kono knew who could perform the deadlift or the shoulder shrug and have his arm “pump” up.

This very same person who had no back development to speak of, within four months of training with the straps, improved his back development to the extent of winning the best back award in the Hawaiian Island. (Incidentally, he also won the best arms award,) The use of straps can make the upright rowing motion an all deltoid movement. Slick, chrome-plated bars can tax the grip when using a close grip in this exercise but by the use of straps you can concentrate all the stress on the deltoids.

Straps are easy to make. Obtain two strips of strong, pliable webbing approximately 1 1/2 inches wide and 18 inches long. Loop one end of each strap and stitch securely the overlapping portions. Make sure the loop is large enough for your hand to pass through yet small enough so that the strap will not slide off.

When in use the strap should lie flat against the back of your wrist without any wrinkled (these wrinkles or “skinny” straps can “dig” into your hands and can cause discomfort) with the loose end of the strap left dangling.

This free end is looped around the bar just once, letting your cupped hand clamp over the strap on the bar. Study the photographs accompanying this article and you will see the method used in encircling the strap on the bar. The other photos show the straps being used in the various pulling exercises.

After you have both hands on the bar (with the straps around the bar) and you wish to tighten them, just rotate the bar in the direction in the thumbs are encircling it.

This will take up any slack on the straps. A word of caution. Do not wrap the straps around the bar so many times that you have difficulty in releasing your grip. There has been a case where the ambitious lifter strapped his hands to the bar to perform repetition snatches and pulled so violently that he did a back somersault, striking his head on the bar, knocking himself unconscious.