How to Warm Up at Lifting Meets? 30 Pounds Extra on Total! 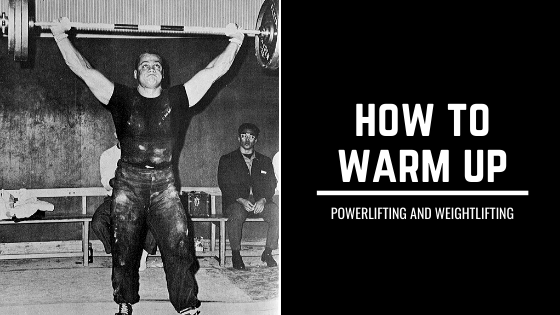 Do you want to know how to warm up before a powerlifting or weightlifting meet? Great here are the methods used by the champions! Have fun, Mr. Berg!

Learning the best way to warm up prior to the first attempt on the competition platform can earn a gain of as much as 20 to 30 pounds on your total! 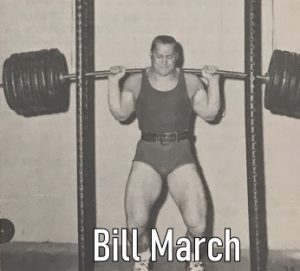 The warmup is one of the most important, but most neglected parts of lifting competition. According to lifting legend Bill March at least 80% of the athletes leave one of their three attempts in the warm up room. This is due to either warming up too heavily or doing too many repetitions. When preparing for a contest, most lifters have a very good idea as to what their attempts will be be, but 95% never give their warmup poundage much thought.

When they get to the warm up room they have no set plan of attempts or poundage that they will use. They go about the warmup by taking whatever weight the lifter in front of them happens to put on the bar. According to Bill March they sit around for five or ten minutes before taking another turn at the warmup bar. Then, first thing they know, the Master of Ceremonies is calling for their starting poundage to be put on the official bar.

Now they try to rush, and do in one minute the warmups they should have been doing for the past quarter hour. They then hurry to the official platform, miss their first attempt, and cry all the way back to the warmup area, “Gee, I didn’t have a chance to warm up good!”

What’s the real reson? No set plan of warming up!

In planning for your warm up, fist you must find what is best for you – not your training partner, but you. There seem to be three major ways to go about warming up. You will have to try these in your gym workouts and see which is best for you.

Let’s take these one at a time

Light weights-big jump method
This should only be used by the more advanced lifters, as it requires a very good mental attitude. This type of warmup was used by legends like Pete George, Johnny Terpak and others, but it is now used by very few.

With this method the lifter will warm up with only 135 pounds and do sets of three or five repetitions, resting about three minutes between sets. This is done over the time period of fifteen to twenty minutes prior to the starting attempt. Some lifters will take one medium weight about three minutes before the first attempt.

For example, if a lifter is starting with 300 pounds, he warms up with 135 pounds, working up a good sweat and getting himself very warm and loose. Then, three minutes before he thinks he will be called upon to start with the 300 pounds, he takes his last warmup with a poundage of 250 to 270 pounds.

This is to give the muscles a little heavier work and get them ready for the attempts to come. A few times when Bill March had trouble with cramps and could not use his regular method of warming up, he had to use this system of getting warm and loose.

When you are not accustomed to this type of warmup, it takes a great deal of mental courage to go from a 135 pound warmup to a starting weight of 300 pounds or more.

Working up to 10 pounds behind starting attempt

This method is best used by novices and the not-too-advanced lifter. With this technique, the lifter can feel his way in both strength and form. If the lifter is starting with 250 pounds, he should start the warmups with 135 pounds and then work up, using seven or eight sets, taking 240 pounds as the last warmup about three minutes before the first official attempt. You may do two repetitions until the fourth or fifth warmup set.

The time period for this warmup should be 15 to 20 minutes, with about three minutes rest between sets.

Warming up to 25 or 30 pounds behind your planned start.

This is the method Bill March used and it was the best for him and the one used by most international lifters. This is done the same way as Method 2, except that you work up to within 25 or 30 pounds of your starting attempt.

In this system, you get both the warm up with the lighter weights and the feel of some heavier weights, but not so heavy that you reach the point of taxing yourself before your first attempt.

This is the biggest trouble with Method 2. On the day of competition if you are a little weaker than usual, and the last warm up of 10 pounds behind your start is hard, then more times than not you will make only one or two attempts.

The last warmup, if is hard, is like your first attempt. So, with your three official attempts, you are really doing four. It’s hard enough to make three good lifts, let alone four. This is known as leasing your best lifts in the warmup room.

In Method 3, you don’t lose any strength with a hard warm up. You can concentrate your efforts on your three official attempt. The length of warmup time, amount of rest between sets, and number of sets performed are the same as in Method 2.

Just remember this, a well-planned warmup will make you really ready for your planned competition attempts. So, for those extra pounds on your total, do it right – plan your warm up. – End