I Remember Sergio – Bob Gajda as told to Terry Strand 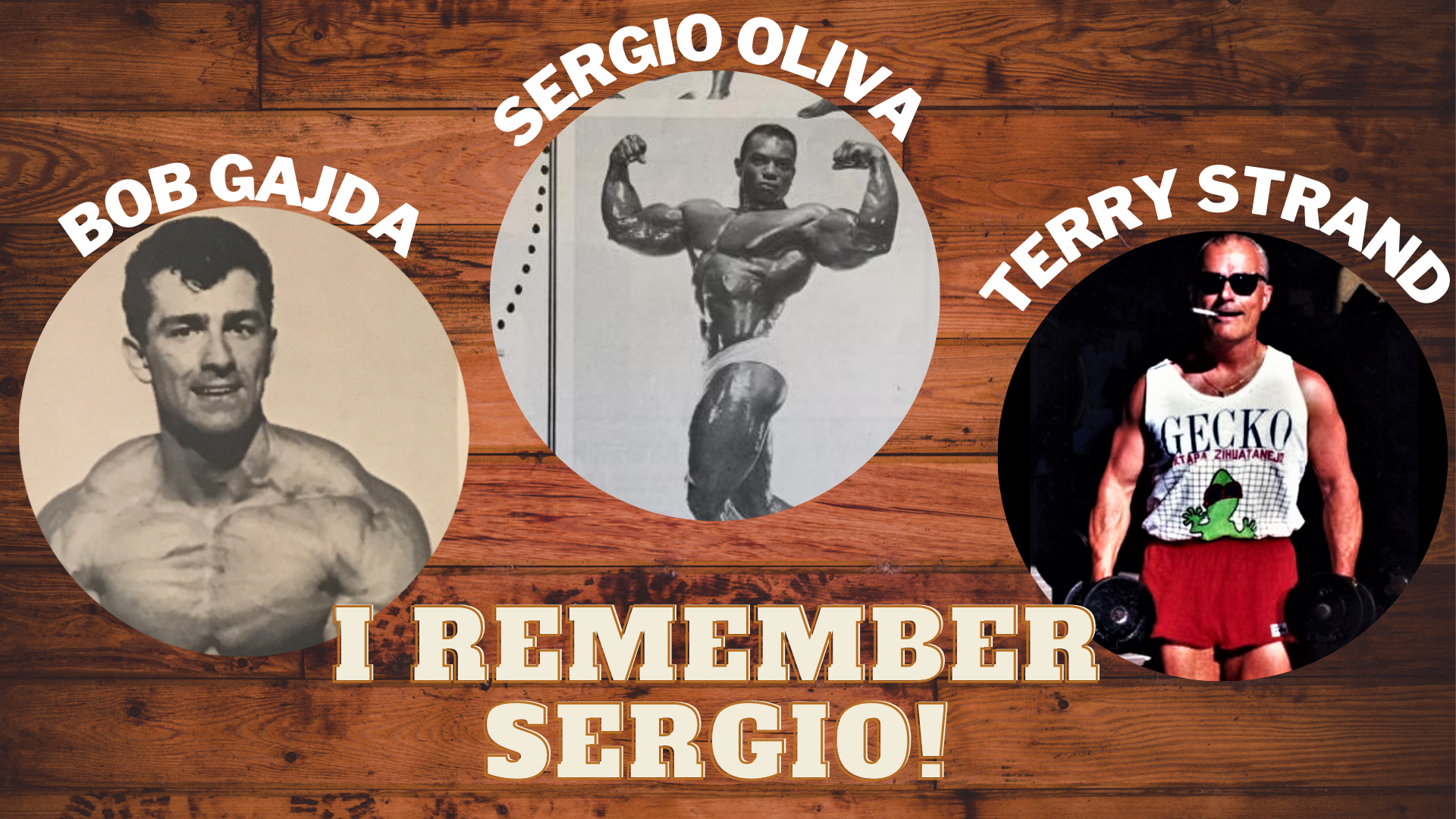 Sergio Oliva hated Castro and Communism, and that’s why he ended up in America, which he loved. He said, ‘Look, you can come here and work hard and enjoy your life and eat good food and all the rest.’ It might be politically incorrect to say that Sergio Oliva was the ‘King of the ‘Polish Broadway’ back in Chicago in 1963 when we met. But I can say that respectfully because I’m of Polish descent, and besides, it was Chicago’s Little Poland. There were two individuals there who were known on the street for their terrific bodies. One was this girl with amazing giant chest girth, and the other was mutant Sergio, a black Hercules, both of whom drew cheers as they walked down the intersection of Ashland and Division.

I was fresh out of the Air Force and had taken a job with the lofty designation of ‘Weight Room Attendant’ at the Division Street YMCA. What it meant de facto was that I was supposed to get the ghetto kids off the street and out of the poolrooms and into a healthy bodybuilding lifestyle. I’d run into this Sergio guy and invited him to an AAU Olympic Lifting/Bodybuilding Contest held at Sayre Park, where there was a crew of good iron heads who were staging the meet. It was called the Chicago Park District Olympic Lifting Championship/Mr. Chicago Park District, and Oliva did show up. We had contests all the time, AAU, Park District, YMCA, and you name it. At this meet a middle-heavy was about to do his lifting as Sergio got up from his chair to use the washroom. Sergio was wearing a tight white T-shirt and looked as sleek as a black panther in pantyhose. John Balik said the crowd saw him and hushed. The birds in the trees stopped tweeting. The bees stopped buzzing. The lifter on the platform stopped in mid-lift.

Soon we were training together at my Y, and when I took a better job at the Duncan Y in ’64, Sergio came with. He got an apartment on what was essentially Skid Row, across the street from Duncan between the brothel and the pool hall. Then we got him a job at a junk yard where he was told, ‘Here, take this sledge hammer and beat the living hell out of this mountain of refrigerators until they’re flat as a pancake.’

So then at Duncan we really started cranking it up. The Y gave us a basement to turn into a weight room. There were rats in the locker room, live steam pipes dripping scalding water on you, chipped tiles in the shower room that you’d cut your feet on. The whole place smelled like liniment. We were all like a family there in that Y basement. We started designing our own workout equipment and making it out of scrap parts. We welded up a standing calf machine from rusty machinery pieces and filled it with grease. Sergio and I used 500 pounds on it for thirty sets of calves. We revamped a standard York Krusher, the spring thing for the pecs, put on some Oldsmobile engine springs on it, tripled the size and bolted it to the wall. We broke those springs on that thing all the time.

We hit up some of the mobbed-up guys for donations who used the Duncan steam room for their private conversations. They were always very generous to us with contributions, and made the Y a safe place to train. A pedophile was caught in the shower room and those guys were notified. He disappeared.

By the ’64 AAU Mr. America, Oliva was ready to go up against the other national-level champs. He was still nowhere as mind-bending as he would be three years later when he took down Arnold. A lot of crazy stuff went on at the Duncan. I recall we went to OHare to fly to the Jr. Mr. America. We both fell asleep, snoring in our chairs as our flight took off without us. Somehow we hopped the next ride and made it.

In ’66 I won the America and Oliva won the Most Muscular. Back then the AAU wanted you to speak English, be a spokesperson for lifting, and it was not to be for Oliva. John Grimek was going to pay for Oliva to go to Europe to represent the USA in the Mr. Universe….but since Oliva was an illegal alien from a Communist country the paperwork for his passport would not go through. I told Serg to go to Weider where there was the Mr. Olympia, Mr. International, etc. that he could win without leaving US soil. It wasn’t until Arthur Jones came along to back Oliva finally got fixed up on that account. And Jones paid when he said he would pay. Oliva loved him for that. He didn’t have to chase Joe Weider around his desk like Freddy Ortiz did to collect the cash. 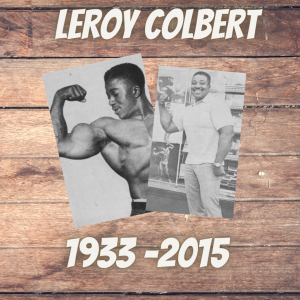 I remember riding with Leroy Colbert who was judging some meet, and always talking arms, arms, arms. I said, “Yes. But what about the calves? You’ve got to have good wheels, not just upper body!” He replied, “Oh, but blacks can’t have good calves, so I don’t take off for that. We blacks all have high and thin calves. Steve Reeves being white has natural calves so you shouldn’t judge them in a contest.” “Maybe”, I said, “but look at Sergio, we train the calves with the upper body and he has magnificent calves.”

Sergio was more of a Puerto Rican in temperament rather than a Cuban in his dress and mannerisms and personality. You expected Ricardo Montalban and got Ozzie Guillen.

He was gentle, except when he shouldn’t have been. Later on as a cop the story is told of how he came upon a guy beating a woman, picked the guy up over his head and threw him through a store window. Back in those days you could tune up a creep without being fired and then sued.

Sergio really should have had an advocate or an agent by the time he entered the Olympia. Arnold had the very shrewd Reg Park to mentor his deals with the Weider Brothers. I was raising my family and involved in school and could not do much. I didn’t understand Weider myself, and it was easy for him to run circles around the champs, offering them cover shots and future fortune. Oliva found himself involved in the Weider business culture that as an immigrant he did not comprehend. And that is not surprising because we native English-speaking guys had no idea what was going on. Randy Roach explains in his Muscle, Smoke, and Mirrors how Arnold tried and nearly succeeded in uniting the bodybuilders shortly afterward for true professional contracts, not Fred Flintstone purses.

Arnold himself duped Sergio in 1969 during a Chicago visit, telling him, ‘you’d look great, but you have to gain weight’. So Oliva packed on more poundage and ended up smooth as a jelly donut….but still beat Schwarzenegger.

In 2005 my friend Terry and I flew to a Dan Lurie show in Maine. Oliva was invited, too. He missed his flight which had about twenty connections, grabbed a taxi when he landed driven by a blind cabbie, got lost, and ended up missing the whole thing. After the event was over, Terry said, ‘Hey, I think Sergio is right behind us’ as we entered the hotel Lurie had put us up in. Sure enough, here Oliva comes in an ankle cast and a wrist cast carrying two giant suitcases, sweating like a call girl in church. He’d crashed his vintage car earlier, and was a mess. He proceeded to describe the perils of getting there, far worse than escaping Cuba and the Commies.

Many more memories are to be told of Sergio Oliva, and questions to be answered. For example he wore gold chains, rings, necklaces with medals as big as hubcaps. People asked, ‘was he ostentatious?’ No, he chose to wear gold to let everyone know that he was special, but in his own way…not theirs…as if to say, “Let no man write my epitaph” Every time Oliva left and entered his house he made the sign of the cross in front of a small grotto there to the Virgin Mary, a custom of his traditional Catholic faith. So go in peace to meet your Maker. You were a good friend and an immortal bodybuilder. God bless you