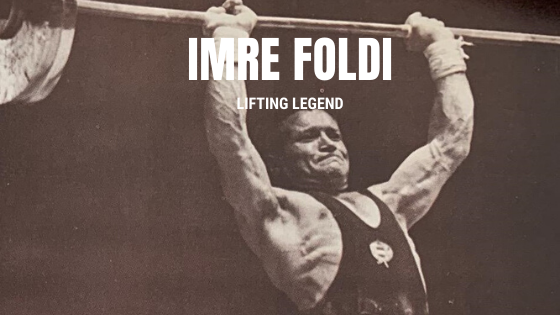 Oldschool weightlifting Imre Földi was a Hungarian weightlifter. Competing at a record of five Olympic Games, he won a gold medal in 1972 and silver medals in 1964 and 1968. During his career he set 21 world records,

Kecskemet is in the heart of the form land of Hungary and this was the birthplace of Imre Foldi. At the age of 14 he took a job in a food canning factory, but soon met the recruiters from the coal mine and signed up. This is how he got to Tatbanya.

At that time weightlifting coach Sandor Gere was searching for youngsters who were naturally strong and could be more easily helped into the international category of weightlifting. Mr. Gere happened to drop into the gym of the apprentice coal miners and there he was the small, but very muscular youngster who tried to imitate the exercises of the other boys.

Sandor Gere then invited Imre to train at his gym. The next day he was already trying to imitate but he too was clumsy with the weight. This was in the early spring of 1953 and Imre was still under 15 years of age and weighed but 115 pounds. Nevertheless, he burned with the desire to excel.

In the first two years he trained three times a week. During the third year, he started training four times a week, and still later, five times per week.

Imre soon realized that he was not cut out to be a coal miner, he wanted to become a mechanic.

Mr. Gere couldn’t talk him out of it, so finally he arranged for him to be transferred to the machine shop. He was anxious to learn about the machines and upon trying one out without supervision, he cut off one third of the ring finger on his right hand. The manager of the machine shop telephoned with his coach and they took him to the hospital.

This accident put him back more than a year and this is the main reason he cannot keep his snatch poundage’s up on a par with his press. In the Featherweight classes he has set seven world’s records in the press. He is also one of the best Bantamweights in world when it comes to the clean and jerk, but he cannot reach this high standard with his snatches.

However, his burning desire made him forget the pain and his handicap. In 1958 he was able to win his first Hungarian Championship with a nice 617 1/2 total.

Next year in Vienna at the World’s Championships, he had one of his biggest battles when he lifted against the Russian World Champion, Stogov. Both totalled 760 3/4, but the Russian won because he was lighter in bodyweight by a mere five ounces. This contest was a failure in tactics because on an extra attempt he pressed 253 1/2 pounds, enough more to win the gold medal if the lift had been made in competition.

By this time, Imre’s name had become well known in weightlifting circles all over the world. As a result he received invitations to many other countries to compete against their best. Before the 1962 World’s Championships, Imre attended two contests in Helsinki and totalled 793 3/4 in the first and 788 1/4 in the second as a Featherweight. He was also invited to Warsaw where his total dropped to 760 3/4 and he lost to Poland’s Kozlovsky.

His preparation for the World’s Championships was disturbed by these travels and too frequent competition. At the 1962 World’s Championships he placed second to Miyake in the Bantamweight class with a total of 744 (242 1/2, 215 and 286 1/2) but this time beat the Russian, Stogov, who totalled only 727 1/2.

“Then I suddenly realized that is was a big mistake to let my bodyweight go up to 134 by having big, tasty meals,” he explained to his coach at the Olympic village in Tokyo.

“It was very comfortable to compete in the Featherweight class. For more than two years I didn’t have to worry about my bodyweight or the food I consumed. Realizing my mistake, I decided to move down again to the Bantamweight class where I belong. It was not easy. The first time I participated again in the Bantamweight class, at the Hungarian Championshis in 1964, the sudden loss of weight caused cramps all over my body and I couldn’t finish my clean and jerks.”

This was an enlightening experience as it helped Imre make the proper preparations for Tokyo. He followed a strict diet – stopped eating tasty, big meals, stayed away from carbohydrates, and reduced his intake of liquids.

To avoid the cramps, his doctor gave him three salt injections. The first he received during training about one week before competition. The second injection was taken the day before the meet and the third on the morning of competition.

The results were amazing. Imre was the lightest man at 121 3/4 pounds and he was in excellent condition. During the competition he made a beautiful 253 1/2 press and pressed 259 but lost his balance before the referee gave the down signal. His 226 pound snatch gave him a 479 1/2 subtotal and placed him 5 1/2 pounds head of Vakhonin, plus the fact that Imre was the lighter man.

Imre cleaned and jerked 292 1/4 on his first attempt but failed to hold his jerk with 303 1/4 on his second, having the weight slightly forward. Everybody watched his third attempt with their heart in their throat. If Imre made this final attempt, it would be a new World’s Record Total and Vakhonin must make a fantastic lift to beat him.

He carefully set his grip with his right hand on which the ring finger is short and after a strong clean, drove the bar straight overhead for a new World’s Record Total. His record did not stand long because the little Russian, Vakhonin, did the almost impossible and made a 314 1/4 clean and jerk, winning the gold medal from little Imre.

The progress shown by Imre over the years did not just happen, he worked hard to get where he is. He trained every day except Sunday, taking 2 – 2 1/2 hours to complete his training. His training program was set up by his coach and he followed it very careful.

In January he has five weeks of basic training during which he trained to strengthen the muscles. He did a lot of good mornings, incline presses, squats and various other assistance exercises, performing few Olympic lifts.

He is a firm believer in heavy squats and has done five repetitions with 440 pounds in this exercise. He usually competed eight to ten times a year. Thee times a week he trained at the mining club he represented and the other three training days he trained in Budapest, although he lived 35 miles from the Capital, with the other representatives of the Hungarian team.

In private life Imre was a mechanic. He used to get up at 6 A.M. as his work day started at 7. He worked four hours a day, six days a week in the machine shop.

After lunch he had his daily, two hour nap. Imre’s favorite past times are television and movies, but he made is a point to retire by 10 P.M..

He was happily married and in Tokyo, after the competition, he went from one department store to another, mainly buying presents for his wife.

“My idol as a weightlifter and sportsman is Tommy kono. He is very popular in Hungary and we think he is one of the greatest lifters of all time”