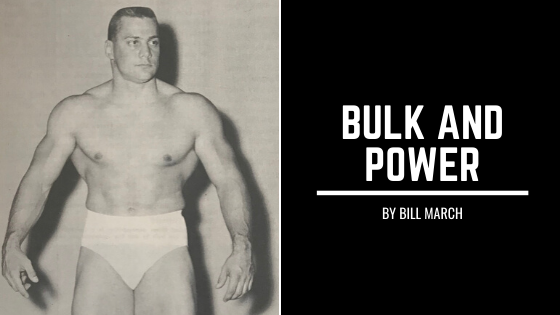 The greatest oldtime powerlifter of our times Bill March tells you his secret “overload” training system – a system that will increase strength by 25% in one month by training only a few minutes a day! Have fun – Mr. Berg

Everyone in the weight game is training for some kind of power. They may be interested in the Olympic lifts, Power lifts or bodybuilding.

There are many ways to go above obtaining this power. Since Bill March gave up bodybuilding in 1960, he has tried just about every way known. Up until his introduction to the Isometric Isotonic Power Rack, he was of average size and strength for a 181-pound weightlifter. His best total on the Three Olympic Lifts at this time was 795 pounds.

The first thing he was told about training on the Power Rack was that he would have to cut his training time from usual 2 1/2 hour workout to about 20 minutes. This is one of the hardest things to do as you will find out if you try this routine.

When you are accustomed to training from two to three hours a day, you feel as though you are cheating yourself but believe – you are not!

When you finish training you feel like you should go back and do a few more reps or one more set. Forget it. If you train and follow this routine a it is told and do not over train by tying to do more sets and reps than advised, you will be amazed at your rapid progress in size as well as power.

As you know, any muscle you work on Isometric Training is broken down into three basic parts; low, middle and high. This also holds true of any push or pulling movement.

In lifting, puhsing or pulling, there are called “hard” or “sticking points.” What they are your weakest points in the pull or push you may be doing. Doesn’t it seem logical that they are the points you should work?

In this routine you will handle weights you never dreamed of handling. Your workouts will be four days a week of about 20 minutes a workout. Training days should be Monday, Tuesday, Wednesday and Thursday. Friday should be rest day.

On Saturday you should try yourself out to see how much improvement you have made during the week. You do this by using Saturday as though it were a contest. Whether you do the Power lifts or Olympic lifts, go for your maximum.

If doing this every Saturday is too much, then try doing it every other Saturday. (This will depend on the individual.)

This is a great asset to any lifter. Bill March knew many men who are strong but when the weight gets to 300lb, 350lb or 400lb, they become afraid and cannot handle this poundage. It is not because they lack the strength but because of their mental attitude. It is not up to par.

This routine will bring it up and keep it there. Bill March’s routine is broken down into “low position” and “high position” days. This he has done because as he progresses and uses increasingly heavier weight, the combining of the high and low position places too much work on the muscles and fatigue sets in. This is what we are trying to stay away from. You want to work the muscles to get maximum effort from them but still not overwork or fatigue them.

This system uses only one set of three reps in each position. First thing that has to be done is to find your individual sticking points. You have done enough lifting movements to know where you push or pull hard. Work on this point, do not use Bill March’s or some else’s unless they are suited to you. Remember; one inch up or down on the Power Rack can mean using 100 pounds more or less!

Here then is Bill March’s routine as he does it to increase his power for the Olympic lifts. On the Isometric-Isotonic Super Power Rack there are 40 holes drilled one inch apart. Here are the positions he uses.

First, before using the Rack, he hangs from an overhead bar and does 20 to 30 Frog Kicks. This loosens him up and helps strengthen his groin and lower back as well as give his abdominals a good workout. 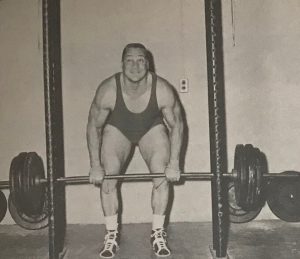 This he does from Hole No. 5 (see photo). He does not use his arms to pull in this position but rather use them as cables attached to the bar pushing with his legs until the weight comes off the pins at least two inches. He let go of the bad and repeat the movement. On the third rep, when the weight gets two inches off the pins, he holds it at that spot for 12 seconds then put the bar down and move on to the next position. 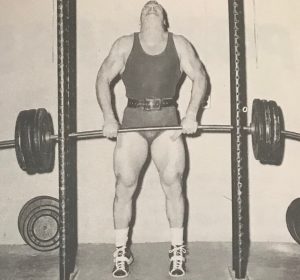 Using Hole No. 10, he pulls the bar as high as possible so as to get some bend in the elbows. He pulls up twice and on the third hold it for 12 seconds with the elbows bent as much as possible. 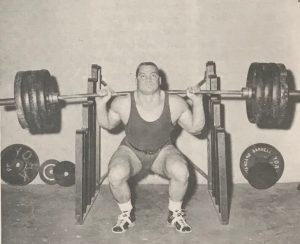 Using Hole No. 16, he pushes the weight off the pins as high as possible twice then, on the third, hold it up there for 12 seconds. He uses a weight that he cannot come the whole way up with. 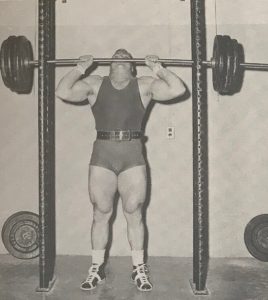 Using Hole No. 27, he pushes as high as he can twice and hold it on the third for 12 seconds trying to press the weight higher all the time.

Routine: Tuesday and Thursday
He deadlifts the same as on Monday and Wednesday as this exercise is to be done every day. 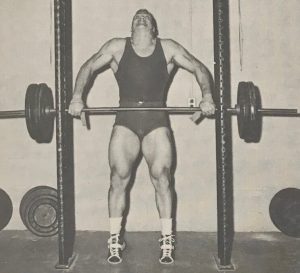 He uses Hole No.14. Here he uses the Snatch grip pulling as high as possible and holding the third rep for 12 seconds. 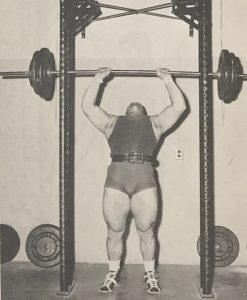 He uses Hole No. 32. From here he presses the weight to arm’s length for three reps, holding the third for 12 seconds. 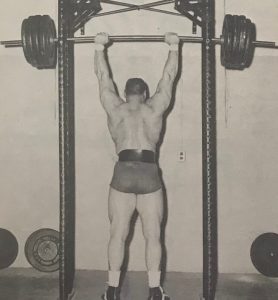 From Hole No. 37 he pushes the weight up three times holding it on the third for 12 seconds. 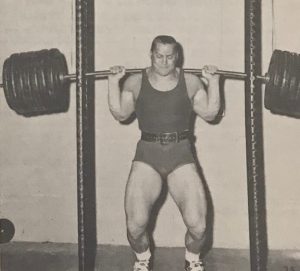 He uses the same poundage for one week then increases it 10 or 20 pounds the next, always trying to use more and more. In this he is using more and more each week.

This builds a good mental attitude as well as overwhelming power.

If you are wondering about hitting a limit poundage with this routine – don’t. Bill March does not believe ther is one! Each time he has taken a layoff from Power Rack training (about every two months) He always surpasses his previous high poundage in each position.

Just for the record and perhaps as a guide for other power lifters, here are the highest poundages he has used in each position:

There it is. For real power and a great bodybuilding workout you can’t beat it. This system can be used on the Power Lifts or any bodybuilding movement.

This is the secret “Overload System” that Bill March used to set world record totals and lifts. It is the system that lightweight Tony Garcy; light-heavyweight Gary Cleveland and heavyweight Tommy Suggs used to increase their totals by as much as 35 pounds in one month!

Did you like the article and want to read more? Great, my main goal is to attract many visitors as possible. Thus just share the training wisdoms with your training buddies and I will keep publishing – Mr. Berg