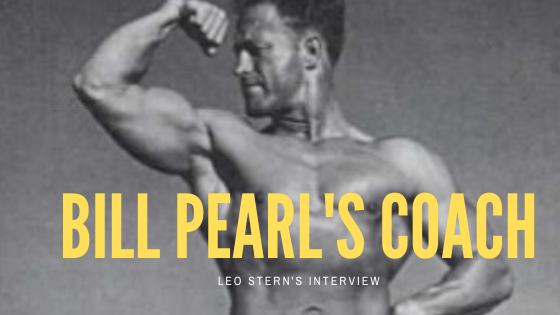 Leo Stern was one of the greatest bodybuilding coaches and photographs! He introduced Bill Pearl to bodybuilding. I asked Pearl about Leo Stern and he said this:

“Berg, If it was not for Leo Stern there would be no Bill Pearl…the bodybuilder!”

Q: How did you start lifting?

Leo: When we started the Hillcreast Barbell Club, all we had was an exercise bar and a flat bench. We followed the York plan on Olympic lifting, our main interest, with bodybuilding second.

At that time (1939) the powerlifts were not used at all. People working out might have done bench presses and squats and deadlifts, but there was no competition. We did our bodybuilding exercises, such as curls and lateral raises, after we did our lifting. The equipment was primarily barbells and dumbbells, along with the leg press machine, the squat rack and the flat bench. 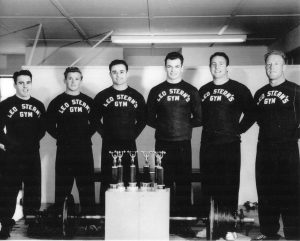 Leo: I started my first gym at a 15′ x 50′ location in East San Diego. In those days, weight training was not looked upon as a suitable thing for people to do. They look at us like we were a little weird. We used the words “health club” instead of gym.

I stayed in this first location a year and half and then moved to where the gym has been since 1948. It was purchased from me by the Mauricio family in 1989,and they’ve done a very good job of maintaining the gym as it had been all these years.

Q: How did your gym evolve into one of America’s finest.

Leo: We started out in North Park with a second floor location in a 50′ x 100′ building. Through the years, we added equipment such as the pec machine and the treadmill. Bob Clark and I worked together and he developed a company which became Polaris. Bob was an outstanding engineer. I think he was the first one to come up with an offset cam on a curling machine. He developed the Pec Dec and so forth.

Q: What about some of the contest you promoted?

Leo: We always made an effort to push the idea of weight training, giving exhibitions in schools or taking weights to the beach on weekends, trying to get people interested. We staged Olympic lifting contests along with physique contests. In April 1947 we staged the first of series of variety shows.

We had variety acts because in the early years weight training was not popular, and you ad to come up with some entertainment. We had outstanding lifters; John Davis came and gave an exhibition.

In 1948 we started powerlifting. We didn’t call them powerlifting contests, we called them “odd lift” contests. We started them in the gym shortly after we moved in and we started out with the two hand barbell curl, the bench press, squat and deadlift, three attempts for each.

We staged powerlifting contests and fellows from Los Angeles like George Frenn, Peanuts West, along with Pat Casey would come down and compete.

There were a lot of character in those days, but very nice guys and we had an awful lot of fun. At one time we managed to get Terry Todd to come out and compete against Pat Casey.

Q:What are the differences in the training methods of today compared with those of your day?

I think the development of certain parts of the body have been improved upon through machines. Possibly one of the best improvements that I’ve seen is the electrical resistance control machines.

Bill Pearl and I were working with a couple of fellows back in the late 1960’s, who came up with a single post “Astro Bar”.

I told them it was impractical they’d have to make it more like a power rack so you could have a more rigid setup for your electrical resistance. The machine was very good. I got the very first one in my gym, and I was very happy with it and then Bill got one for his Pasadena Health Club.

As usual, I was either 20 years too soon or 20 years too late when it came to such things, but we developed quite a few machines through the years that Bob Clark built. The beauty of working with Bob was that you would tell him what you had in mind and he’d sit down and draw the thing up and come up with a better idea than what you had.

Q: What is your opinion of the Muscle Beach scene in its heyday

Leo: Santa Monica was the ‘Mecca’ of weights in the early years. Anytime John Davis or any of top lifters came to the coast, people flocked to see them lift and work out. I think that Muscle Beach had a tremendous effect on weight training and bodybuilding in America.

Q: What were your impressions of Perry and Mabel Rader, who produced IRON MAN Magazine? 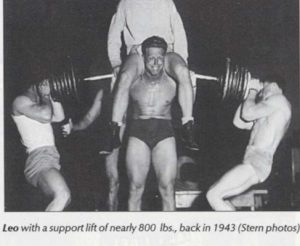 Leo: They published lots of different viewpoints on weight training. They accepted powerlifting, and made a big effort to develop interest in Olympic lifting as well as powerlifting. Their “Lifting News” did a fantastic job for weights, and the sport owes them a great deal of gratitude.

Q: What were your impressions of the great Pat Casey?

Leo: Pat Casey is the one who really brought attention to powerlifting. He was very suitable for it – a very modest individual with a great deal of strength. I remember going up and shooting some pictures of him at Pearl’s Gym in Los Angeles. He was taking 210 pound dumbbells out of the rack, unassisted, laying back and dropping five reps on the incline press, and then placing them back in the rack.

I don’t know how many sets he did that day, but it was quite impressive. He was a source of amazement to me every time I saw him lift. He was fantastic 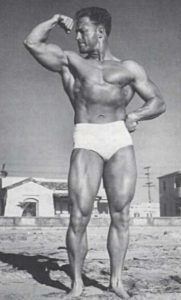 Note: Above that’s Leo Stern in 1946. In 2003, he was presented the Graphic Muscle Physical Culture Lifetime Achievement Award, at the NPC World Gym Classic San Diego “Bodybuilding and Figure Championships.” Leo died of natural causes on September 8, 2009, at age 88.