Isometric Workouts – Their Origin and Implementation 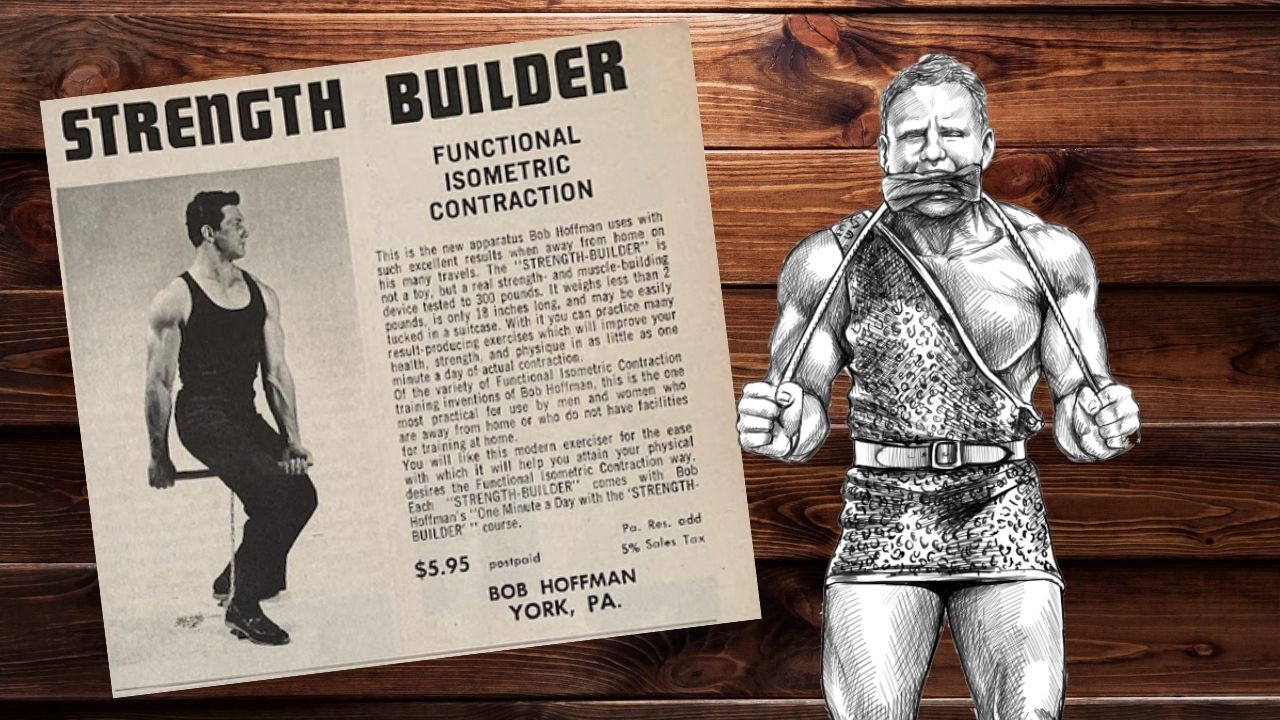 The usage of isometric workouts has been long favored, even before barbells and dumbbells were invented. Russian Strongman and Prisoner of War Alexander Zass believed in the application of isometrics. Arnold Schwarzenegger, Bruce Lee, Bill March, Don Ross, Joe Bednarski, and the first American strength coach Alvin Roy were all sportsman who trained with isometric chains and/or bands.

Back in the day, the magazine Strength & Health promoted various isometric training equipment. The prices ranged from $30-$100. According to a YouTube video by Golden Era Bookworm, Bruce Lee was a huge fan of Strength & Health, and so he bought their famous isometric power rack. If you Google Image Search “Bruce Lee Isometric,” then you will see that Bruce Lee used the original York Isometric Rack.

Alvin Roy became the NFL’s first strength coach, and he played an important part in combining football with weightlifting and isometric training. Recently, I read a Strength & Health article entitled “The Strength Program of the San Diego Chargers,” which was penned by Roy in the ‘60s. He developed a system called “Functional Isometric Contraction Explosive Power Training Program” and promised that this system would develop strength, flexibility, power, endurance, and speed. The article is well structured and consists of the following headlines: “Strength for Football,” “Speed,” “Explosive Power,” “Agility,” “Injuries,” and “Marry Isometrics and Weightlifting.”

The last headline is about Roy’s visit to a coach named Johnny Vaught at the University of Mississippi, in Oxford, Mississippi, in the United States. Roy’s task was to prepare a weightlifting and isometric program for the “Ole Miss” football team. At the time, weightlifting had a bad reputation, as most football coaches believed that it would make their players too musclebound.

Coach Vaught was quite skeptical about Roy’s approach and even more skeptical about investing $1K in weights, and the power isometric rack on top of that. Roy managed the situation well and said to Mr. Vaught, “Each day when you wake up, if you would say to yourself, today I’m going to pull the isometric bar out of the ground, I’m going to push it harder than I have ever pushed it before in my life, you would never have to lift another weight as long as you live, but unfortunately, after we do Isometric Contractions for a week or two, we reach a plaeau and we stop exerting a 100% effort.”

I asked Coach Vaught if he remembered George Rice, 255-pound freshman tackle at Louisiana State University, that “Ole Miss” tried to enroll. I explained “when Rice does an isometric pull, he gets very little out of it because he doesn’t pull, but when you put 300 pounds in George Rice’s hands and you make him do a rowing motion or Power Pull, then he’s getting the full benefit from it.”

Coach Vaught Looked at me, smiled, and said, “I’ll buy that.”.

At the end of the article, Roy added that teams which discard their weightlifting programs for Pure Isometrics Contraction alone are making a terrible mistake and will lose strength because of it.

Don was quite the successful American bodybuilder in the ‘80s and managed to win the Pro Mr. America title in 1977.

Don penned an article entitled “Isometric Training For Strength and Definition”. It starts with a brief history of isometric training, and he explain its rise and downfall. The article isn’t commercial, and he wasn’t trying to sell any expensive equipment. On the contrary, he encouraged readers to build their own isometric equipment!

According to Mr. Ross, “If you were exercising in the early 60’s, you remember the Isometric Fad. People who didn’t want to put out the time to exercise were encouraged to take ten seconds a day to push against their doorways, down on their desks, and against the steering wheels of their cars, to build ‘instant muscles.’

At this time, many athletes and coaches realized that strength increased after applying muscle force against immovable objects. Several top weightlifters used isometrics to strengthen their muscles at the point at which they had gotten stuck when lifting past their limit. After the popularity of isometrics went the way of all fads, most of the devices sold to the public ended up in the city dump.

Isometric will help produce outstanding strength gains and will bring out “hidden” muscular definition.” When you exercise with weights, even utilizing the strictest form and applying maximum effort, you can’t apply maximum force to every angle of the movement. The most unique aspect of isometrics is that they take only seconds to perform. Just as you warm up with weight training, it is necessary to do the same with isometrics.

I have always found that adding isometrics to my regular bodybuilding training increases my strength and definition noticeably.”

Arnold Schwarzenegger and the Resistance Bar

The godfather of bodybuilding, Arnold Schwarzenegger, used something similar. He never used the isometric bar with chains; instead, he used a construction with bands, which allowed him to perform both resistance and isometric exercises.

The old German magazine, KSR Issue #47, which was printed in 1967, provides an article entitled, “Become Strong and Fit for the Summer,” alongside pictures of Arnold performing four different resistance exercises.

The introduction is as follows: “Arnold Schwarzenegger, the new and first German-speaking Mr. Universe, also owes his great progress to training with the great muscle shaper, the Herkules Universal. From the beginning, he was enthusiastic about the variety of its application possibilities, and its singular construction. Training with the Herkules Universal can be done anywhere, indoors or outdoors. Start by exercising only 15-20 minutes a day, and you will gain muscle mass fast.”

I am fortunate enough to own the apparatus, which was constructed in Arnold’s heyday.

Arnold used the model made by the company Herkules. Mine is called Der Muskulator, and it contains a manual with around 15 exercises in it. You can really train your whole body with it!

1 thought on “Isometric Workouts – Their Origin and Implementation”