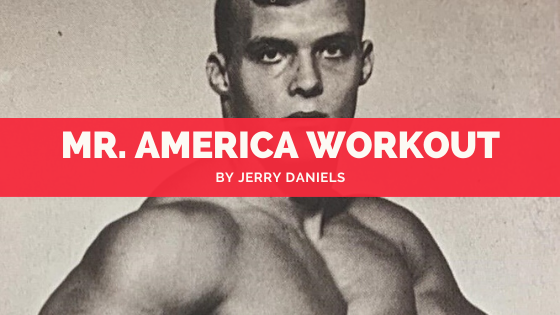 At the 1965 Mr. America Contest Jerry Daniels finished first and beat future bodybuilding legend Sergio Oliva. In this article you will learn how Jerry Daniels trained for the Mr. America contest, have fun – Mr. Berg

When he first started entering contests he didn’t realize there was such a thing as training a special way to get into contest condition, so he would train the same old way with just few minor adjustments that a person would make in his workout routines over the months.

For the 1964 Junior Nationals which was held at the World’s Fair in New York, he started training for the contest about three or four months ahead of time thinking this would give him enough time to gain up and lose back down for the contest. About six weeks before the contest he figured he had better start losing down so he adjusted his diet to fit this purpose.

He cut down on most of the real heavy foods, and cut down on all liquids except water – little did he know that this was the wrong thing to do.

About a week before the contest he had lost from 207 pounds to 197 pounds. He did not have time to gain back what he had lost and figured this would be a good weight for the contest.

He had not figured on losing more weight on the way to the contest but he did.

They left Chattanooga on Tuesday before the contest and went to York for a couple of days. Not being able to eat just right and all the riding which was nearly 1000 miles caused him to lose down to nearly 190 pounds. This was just fine definition, but his size was not so good – he looked like a board.

After he returned home he decided that he had traveled in the wrong direction in training for this contest.

He took a couple of weeks to get rested from all the excitement of the contest and fair. He started right then and figured out what steps he should take for the 1965 Junior Nationals the next year.

For the next seven months he was on a routine to gain weight. From the time he started after the 1964 Junior’s until January he had gained from 190lb to 222lb.

He figured he still had time enough to trim down. He wanted to go into the Junior’s a t a weight of about 216.

It was getting close to the time to start a slow process of trimming down. The first step he took was to increase his repetitions – from six repetitions to eight.

This didn’t just give him the needed change in workout routines – it also started to him on the slow process of trimming down for the contest. After the first week or so he noticed a change in definition and over all appearance.

The month of March was about to come to an end and so he decided to change his routine again.This time he changed the number of repetitions from 8 to 10. Variations in some of the exercises were also made at this time. For instance, some of the exercises that he was doing such as the triceps pullover press on flat bench he changed and did them on an incline and decline bench. Now by doing this he found that the point of strain on the muscle was different and by changing this exercise he was able to avoid staleness this close to the contest.

Minor changes helped – switching the grip on the bench press from close to wide helped give the extra cut in the pectorals that is needed.

By this time his workout were taking from 3 to 3 1/2 hours four days a week so he figured he needed some kind of change to cut down on the time he was spending on workouts.

He thought about cutting the number of sets but this didn’t seem to be the answer since he needed as many sets as he could do in order to get the maximum size, shape and definition on all muscle groups. And he did not think that by cutting repetitions or sets he could do this.

He finally decided that by going on a six day a week routine and by working two muscles groups a day that he could put more time on each individual muscle group than if he had to cut out some exercises or sets.

By working out six days he found that he could cut down his workout time to 2 or 2 1/2 hours. He was able to concentrate more on the individual muscle groups by working two groups a day instead of the usual three. While he was on this routine he jumped his repetitions up to 12 instead of the usual 10 that he was doing before. By increasing the repetitions to 12 he found that this was just what he needed to bring out the needed definition and muscular shape.

One big factor in the routine which he used before the contest was the diet. In order to get the right kinds of foods he had to determine just what to eat and what not to eat.

The diet was one of the big factors in winning the contest.

The last weeks between the Juniors’ and Senior’s he took the advice of Dave Collier and started doing free hand side bends every day to bring out the definition in his lower back. He also Dave also suggested that he eat a can or two of tuna fish each day to give him extra protein.

Also, by taking the advice of weightlifting legend Bob Hoffman of keeping a tranquil mind, he was able to do his best instead of getting nervous and losing weight as he did in 1964. The exact routine he followed during the final weeks of training prior to winning the Junior and Senior Mr. America title was as follow:

Push-ups (close hand spacing): One set for pump with 70 pounds on shoulders.

Upright Rows: Four sets of 10-12 repetitions with 100 pounds.
Lateral Raises with Partner (partner stands behind and provides resistance as exercise is performed): One set for pump 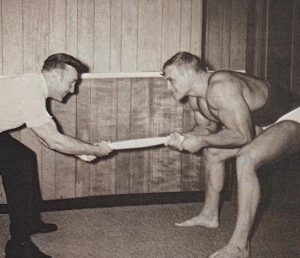 Back:
Chins Behind Neck: Four sets of 10-12 repetitions with 40 pounds attached to waist.

Bent Forward Rows: Starts with 200 pound and works up to 300 in 10 pound jumps, alternating wide and close grip 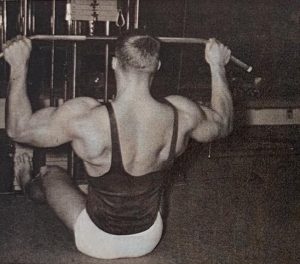 Towel Pulls With Partner: One set for pump.

Chins (palm facing as on curl): Four sets of 10-12 repetitions with 20 pounds attached to waist

Triceps Extensions (on flat bench): Starts with 120 pounds and works up to 170 pounds in 10 pound jumps, performing 10-12 repetitions per set.

Lat Machine Press Down: Four sets of 10-12 repetitions with 110 pounds. 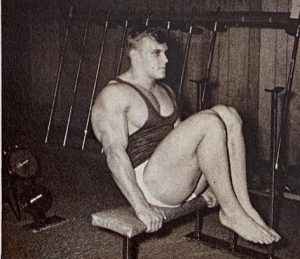 Back Squats: Starts with 250 and works up in 20 pound jumps to a weight he can perform only 8 repetitions with (usually about 330)

Abdominals:
Performs abdominal exercises every day, but on the day he works his legs, he does a few extra sets.

As mentioned above, this routine was used for contest training and not throughout the year!