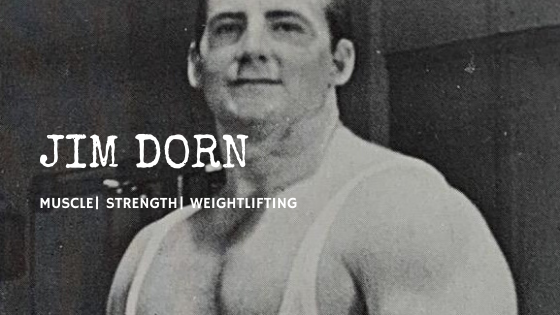 Here is one lifter who is unknown today. Jim Dorn was first an excellent Olympic lifter, won the North American in 1962, as well as the 1963 Junior National Championship in the Lightheavyweight class.

As an Olympic lifter, he has officially Pressed 315lb, Snatched 285lb, and Cleaned and Jerked 365lb for a total of 965lb as a Middleheavyweight.

Jim was unusually strong in the Power Lifts. He has never entered a contest in Power Lifting and therefore has no official lifts to his credit, but he claimed to have made a Benchpress of 470lb (Jim did this lift lying on the floor with the bar on the Power Rack about 4 inches above his chest, from which position he presses it to arms’ length), a Squat of 500, and a Deadlift of 670 (Jim did this lift off the pins of his rack at a height only slightly than the regular height of an Olympic bar loaded with 45 pound plates). 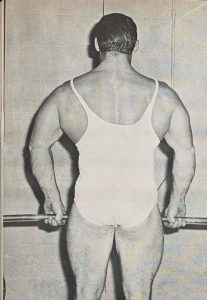 Jim was successful as a bodybuilder, having won the Mr. Pennsylvania title. His bodybuilding success is due for the most part to his naturally stocky build and his work on the Power Rack rather than to any exercising of a bodybuilding nature. He has entered very few physique contests, preferring to concentrate on Olympic lifting, but his appearance in a lifting suit is usually more impressive and causes greater audience reaction than the poses of the “Mr.” contestants who follow the lifting.

Although massive from head to foot, the outstanding part of Jim’s musculature is the almost unbelievable development of his latissimus dorsi area. For his height and weight, he has unquestionably the broadest back in the world.

Jim 24 years old and worked with his father as a building contractor in Telford, Pennsylvania. Although this was often gruelling, back-straining work, Jim trained three times each week, with each workout being hard and heavy. He did not believe in light form work.

Jim Dorn:
“When I am training for a meet, I don’t train any differently than any other time. I don’t cut down on heavy work and concentrate on form. For instance, if I want to improve my Snatch, I do a lot of Power Cleans. When I practice light form work, I find that I get in a rut and the weight feels much heavier than it should, causing me to have to mentally concentrate in a contest on pulling the bar high enough. When I train for power and use heavy weights, I find that at a contest I can use all my mental energy in concentrating on form, since I am confident that my pull will take care of itself. This may sound backward, but it has worked for me.”

Jim Dorn’s weightlifting workout schedule
Jim Dorn worked eight hours a day for five and one-half days per week in his contracting business, so his workouts must be done at night!

He has built himself a well-equipped home gym and he always takes his workouts there. He usually managed to get seven and a half hours sleep each night, and he was a healthy eater, which is a necessity because of his physically demanding job and his vigorous training methods. Luckily for his pocketbooks, Jim ate his meals at home. He specialized in eggs, ham, steak, roasts, vegetables and milk (a gallon a day).

He used to avoid sweets of any kind. In the food supplement line, he uses proteen, energol and vitamin mineral kit.

Listed below is his regular weekly work out. The poundages listed represent his best efforts at the different positions. 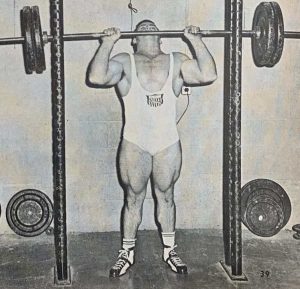 It should also be added that Jim does one set of 25 repetitions in the Jacknife every night before reitiring.