Oldschool Bodybuilder Jim Haislop won the Mr. Florida and Mr. Universe title. Furthermore he joined the Navy. In this article you will learn how he ate, trained and lived. – Mr. Berg

Dick Dudge, the “Tampa Health Club” trained some bodybuilding icons and helped to win the title Mr. Florida.His first gym member was Lowell Scott back in 1959. The second winner was Jim Durrance for 1964 and in the year 1965 Jim Haislop. By coincidence, all three of these Mr. Floridas graduated from Hillsborough High School in Tampa, and all three also participated in football and track. In Haislop’s senior year, the school team won the divisional and city championships and Jim was named all-city fullback of the year. He graduated in 1961. 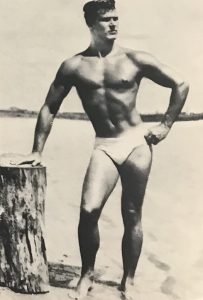 Up to this time Haislop had never used weights and knew nothing about them. One evening he was persuaded to accompany a former schoolmate to the Tampa Health Club where for the first time, he took some interest in barbells and dumbbells. He met Dick Fudge, the gym operator, who was quick to realize that Haislop had the posibilities of becoming a physique star. Fudge spent considerable time explaining the benefits that are obtained from training with weights, such as health improvement, acquiring a better physical appearance, increasing the strength and developing an outstanding body.

Nothing that his listener seemed highly interested, Fudge persoanlly demonstrated some of the basic barbell exercises so that Haislop could better understand the unsurpassed advantages of barbell and dumbbell training.

Jim also learned that weights are practical for people in different age groups and in all walks of life because the weights are adjustable and can be made light enough for even the weakest beginner or heavy enough for the strongest person.

Shortly after this Jim joined the Navy where he was kept so busy that he forgot about weights.

However, during the second year in the Navy he did begin some barbell training and when he visited Fudge’s gym again his upper body showed big improvement; he had gone from 160 to 170 pounds in body weight. Noticing that his legs lacked size compared to his upper body Dick explained the value of squats and other leg exercises necessary to increase bulk and bodyweight.

He suggested that Haislop do plenty of leg work for one year and then stop at the gym on his next leave from his naval. The following year in 1964, Haislop again appeared at the gym and this time his bodyweight had gone up to 208 pounds and his legs looked tremendous. In fact, his entire body looked more muscular and impressive. This elated Fudge and he decided to train with Jim during his entire stay in Tampa. 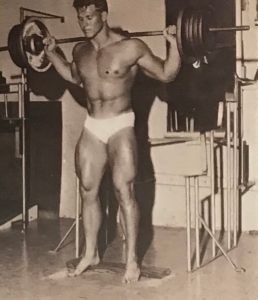 They used 350lb in the squat for 10 reps and three sets, using fairly heavy weight in all their other exercises. Jim’s strength was increasing. Jim had taken Fudge’s advice and spend much of his Navy pay on extra food, which included plenty of steaks, fresh fruits, vegetables, milk, honey and the oldschool supplement from “Bob Hoffman” in order to furnish his body with the best possible nutrition.

In 1965 Jim requested an earlier leave from his ship in order to compete in the 1965 Mr. Florida A.A.U. contest.

He arrived at the gym Fudge and Jim Haislop was not in well shape. But Fudge was not discouraged. He had considerably more faith in Jim’s strength and finally induced him to at least watch the event, and to weigh in just in case he felt better.

Haislop reluctantly followed the gym owner’s advice and when the lifting had begun Fudge convinced him that he should lift just for the experience at least.

So Jim entered the contest and as a result did 350 in the bench press, 485 in the squat and 545 in the deadlift. He proved to be the over-all winner and received  three trophies for his efforts; one for the squat, one for the deadlift and another for the best lifter. It started to be a great day for Jim.

Harry Johnson, former Mr. America and Paul Anderson were also on the program.
The affair took place at the University of Tampa’s Falk Theatre in Tampa, Florida. It was sponsored by the Smith Health Studios and sanctioned by the Florida A.A.U. The M.C. was popular Harry Smith, operator of the Smith Health Studios in Tampa and the contestants came from many parts of the south.

Under the capable direction of Harry Smith everything went off smoothly and quickly. The Teen-age Mr. South contest gave the huge audience an example of the results that weight training will give the youth of our country.

The next event…the Mr. Florida contest, brought together on the stage a gathering of fine physique stars representing many cities in the Sunshine State. Each had a remarkable physique and each received generous applause from the appreciative spectators. But none received as loud and as long-lasting acclaim as did golden tanned Jim Haislop. 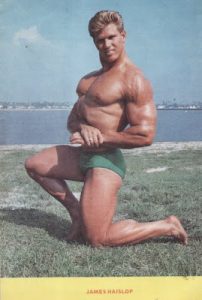 When he took his place on the stage, the uproar was deafening and the cheers and clapping of hands lasted a long time. The judges made no mistake when they voted Jim Haislop for the 1965 Mr. Florida title. This announcement brought forth another bedlam-like period of wild applause that lasted even longer than the first.

This entitled him to a fourth trophy and it certainly seemed this was Jim Haislop’s great day. Doug Betts of Tampa placed second, and Robert Brookens of Palm Beach placed third.

The next event coming up was the Mr. South contest. Everyone said that Jim Haislop has the greatest potential as a great physique star than any other contemporary in the State of Florida, and everyone seemed to feel that Haislop would also win the Mr. South contest that was next on the program.

When he made his appearance in this last contest he received the same wild enthusiastic applause from the audience. Much to the disappointment of many, this time, the judges gave him only third place and of course another trophy.

This gave him a total of five beautiful trophies which is quite an honor in any man’s language. The Mr. South winner was Billy Parker of Atlanta, Georgia. The second place winner was Jerry Clark of Chattanooga, Tennessee. Dom Lodato of Tampa took fourth while Gene Hill from Jacksonville garnered fifth place.

Jim Haislop, the 1965 A.A.U. Mr. Florida could go far in the physique field. At 23 years of age he had his whole life before him. He did not use tobacco or alcoholic beverages and lived a Spartanlike life. He learned to eat well-balanced meals and appreciated the value of food supplement.

He used the split routine in his training and the poundages he used in some of the exercises are: benchpress 275lb, fron squat 300lb, inclined dumbbell press, 110lb; lying French press 145lb; inclined dumbbell curl, 65lb.. all with 8 reps and three sets of each and the full squat with 400lb for 10 reps three sets to name a few.

At this time (1965), he was still in the Navy and served aboard the U.S.S. Vulcan in Norfolk, Virginia.

Life After Bodybuilding
In the early 2000’s, Bill Pearl (Mr. Universe Winner) had the pleasure of lunching with Haislop while attending a fitness trade show in Tampa, Florida. Jim had retired from Southern Bell Telephone and Telegraph Company and continued to weight train. He kept his bodyweight at around a hard 220 pounds.