Bodybuilding legend Bill Pearl coached Jim Morris. After Jim arrived home from his greatest victory in London, Bill contacted him and asked if he would be interested in training seriously for the 1972 Mr. America under his personal guidance.

This took Jim completely by surprise. He had retired from competition following the 69′ Mr. A. held in Los Angeles where he placed 7th. He had won every major physique title on the East Coast, plus the Mr. Los Angeles and Mr. California on the West Coast and competed in three Mr. Americas. He felt he had gone as far as he could.

Jim thought about it hard and talked at length as to what it would all entail. It would be total involvement. All of Jim’s time in the evening after work, Monday thru Friday would be given completely to training. Pearl would handle every detail of his training, including diet. This was indeed a unique opportunity so Jim agreed.

Jim Morris began training with weights at the age of nineteen at the Central Queens YMCA in New York City. He found early success as he gained 30 pounds of bodyweight in the first four months of training.

The results “hooked him” on the iron pills.

The small weight room at the Central Queens Y was dominated by a lifting platform planted squarely in the center. Bodybuilders training around its perimeter were in continual fear for their lives as missed lifts often crashed near them. Jim figured it would be safer on the platform so he tried his hand at Olympic lifting. He did very well with personal bests of 265 pounds int the press, a 280 pound snatch and a 360 clean and jerk all made in the 198 pound class.

Four years in the Air Force was next on Jim’s agenda. Lack of training facilities resulted in a four year layoff from the weights. It was upon his return to civilian life and after he got a job with the NYC Fire Department that he really decided to get down to hard training and did!

With the encouragement from his training partners, Dennis Tinerino and Chris Dickerson, Jim began to enter physique contests. The many trophies adorning his apartment speak well of his many successes. 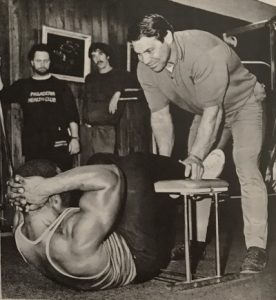 Bill Pearl’s first request of Jim was for him to diet down to a hard bodyweight, no visible fat allowed. For Jim this meant getting down to 205 from 220. The diet, outlined by Bill, called for meats, salads and water only. This meant that protein supplements had to be taken mixed with water.

Dieting down to a fat-free physique and then building bodyweight while still maintaining the same diet helps insure muscular gains only.

It was just this same diet that Pearl himself used for a ful year while training for the Mr. Universe. Bill started at a thin 218 pounds (thin for him) and walked on stage in London knocking them dead weighing 242 pounds of fantastic muscle.

Jim has always been a good poser exhibition a good selection of poses with control and balance during his presentation, So Pearl did not change Jim’s routine in regards to his choise of poses instead, he concentrated on position, making sure each pose was shown to its best advantage. Subtle improvements were made that may seem unimportant by themselves but in the final result could mean the difference in winning or losing. Two men with comparable physiques or even if one is somwhat inferior, the individual with the slickest routine, capable of displaying his physique the best will surely prevail.

Pearl believes that self-confidence is extremely importan in competition. This does not mean swaggering conceit but rather satisfaction in known that you have trained hard, and that you are in the best possible shape, and that your routine has been well thought out and practiced until it appears natural and smooth. In short, being PREPARED.

Confidence is not easy to instill in another. It has to come from within as it is not something that you can turn on for the benefit of the judges. To really radiate confidence in a contest one must believe in one’s self.

Frank Zane, second place finisher to Pearl in the Mr. Universe made the statement, “The day of the prejudging Bill walked in looking like a winner and walked out winning.”

Though Jim has appeared in dozens of contests, including three Mr. Americas, he is admittedly nervous while going over his routine in front of Pearl, the master poser, as he is a very strict perfectionist.

Pearl’s training philosophy is the culmination of 23 years of weight training and he’s kept a log listing every workout during those 23 years. It was with this storehouse of information that Jim’s program was formulated.

Jim trains six days a week, two to two-and-half hours per workout. He uses a split routine, working his chest and shoulders Monday, Wednesday and Friday and his arms and legs Tuesday, Thursday and Saturday. Calves and midesection are worked every training day.

About 15 movements are performed during each session with sets and reps varying quite a bit. Generaly four to five sets of four to eight reps are used. Midsection and calves 10 sets of 15 to 20 reps. Every workout is detailed on a card for Jim and is planned a month at a time. Changes are made each months for the sake of variety.

The following is a sample of a week’s schedule