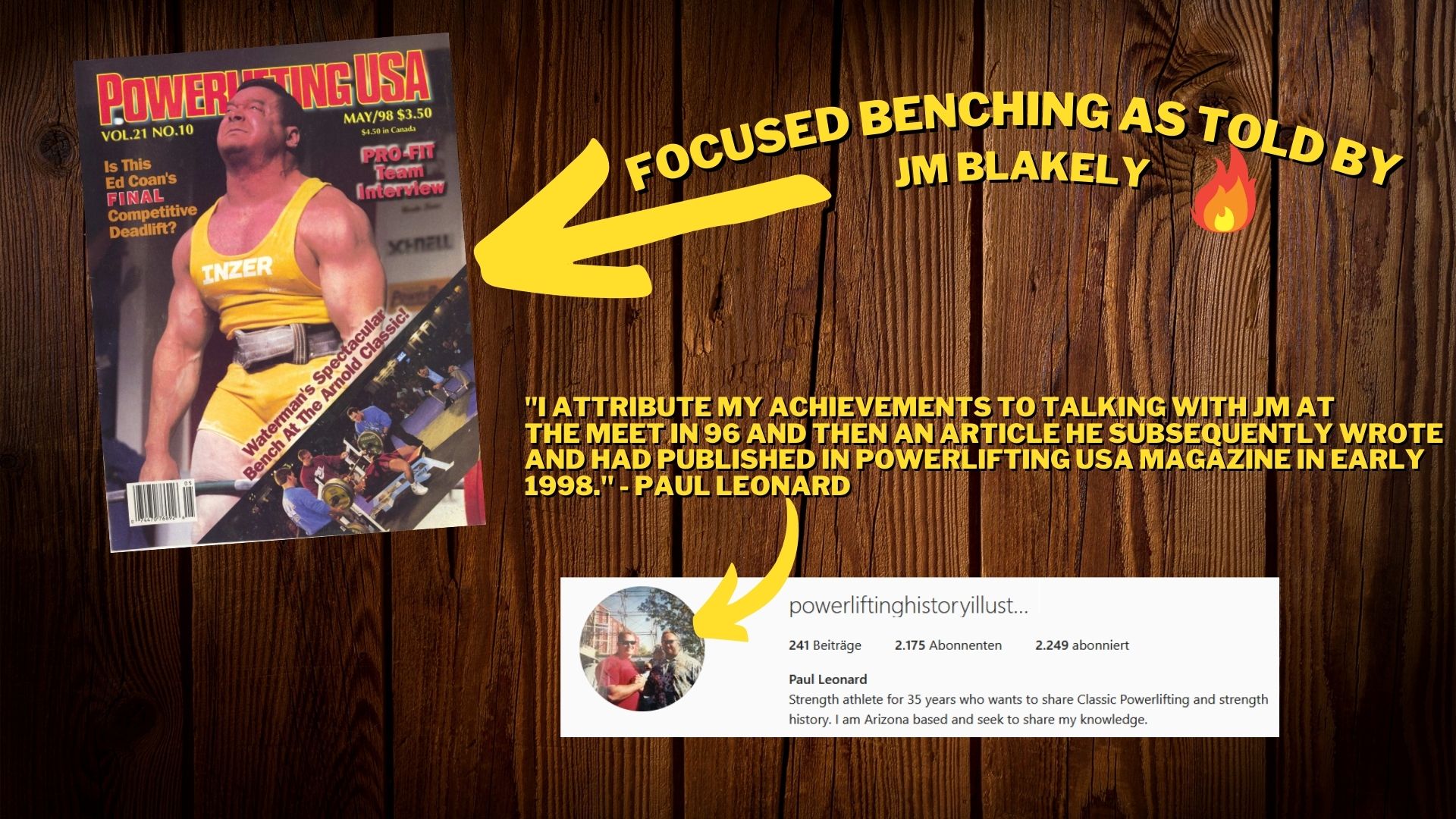 I was able to watch JM Blakely bench press at the 1996 WPC Can Am Championships in Las Vegas. The Saturday night before the fulll Powerlifting meet, there was a bench only meet. A check of Open Powerlifting.Org confirmed that JM had a ten year bench press career which began in 1992.

JM’s best shirted bench was 708lbs and his best raw bench was 466lbs. He obviously got a lot out of his shirt. There is a lot of current material that has been released by JM on his own YouTube channel as well as on Elite Fitness Systems YouTube. In addition, Mr. Blakey’s Instagram account is a wealth of recent information, most of it dealing with the mental or dietary aspect of Powerlifting.

I attribute both of those achievements to talking with JM at the meet in 96 and then an article he subsequently wrote and had published in Powerlifting USA Magazine in early 1998.

The article which contained JM’s training philosophy was simply entitled “Focused Benching as told by JM Blakely.” The article was focused on shirted benching, which was the only form of high level bench pressing competition in the late 90s. The article stressed simplicity in programming for bench press success. JM said that a bencher should begin each training session as if he/she were warming at a contest, warming up to take a near maximum single, for him, in his shirt.

For a 500 lb bencher, the lifter should always be ready and able to put their performance on the line. To further his example of a 500lb bencher, JM says that lifter should bench attempts of at least 480, and if you feel strong, take a supra- maximal attempt such as 505. This builds confidence in the lifters ability.

After the near maximum lifts, the lifter then must build their raw strength. This was done by doing 4 sets of 6 repetitions of paused reps. JM said that he would do the 6 reps until 6 to 8 weeks before the contest, at which time he would then focus on triples.

The second exercise that JM promotes is the close grip bench press with a controlled negative and same rep scheme of 4 sets of 6 reps until 6 weeks before the meet, where he would do 4 sets of 3 reps. The close grips were not to be paused, the tempo JM programmed was for the bar to be lowered slower than it was pressed to lockout for each repetition.

JM is very straightforward as he speaks about how focused a lifter should be. If you do more than two exercises, then you did not put enough mental focus into the first two. To be a great bench presser- focus on the bench, not other exercises like the incline.

There are so many great quotes in this one article. First off, JM gives respect to three lift powerlifters who have to give their absolute best for 3 attempts in the 3 lifts. JM was not a three lift competitor so I appreciate the recognition. In the 90s when bench press competitions were the most popular, many big time benchers would not consider the three lift powerlifter when they dispensed their advice.

JM stresses progress as being the most important part of lifting. If you do not progress from one workout to the next, what makes you think you will progress from a number of the same workouts? JM said the lifters who talk about how much soreness and suffering they endured during a workout- without any progress in the bench to show for it, are so off base and do not have the proper focus or goal setting mindset.

JM’s YouTube Channel of JM7thlevel and EFS Table Talk Series has a great deal of recent material with JM, focusing on the mental aspect of strength training and competition.
JM’s Instagram is also an extra source of information for the philosophy of high mental and physical performance. Try JM’s focused benching program, either fully raw or with a slingshot or a bench shirt and let me know your results.