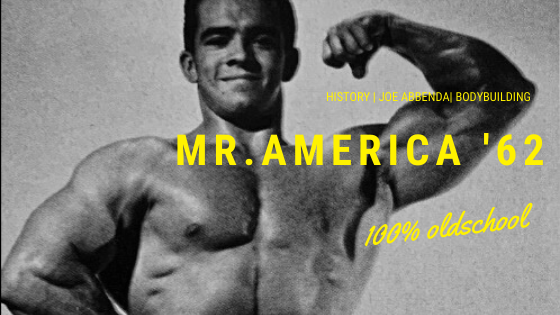 “Was it all a dream? No, it wasn’t. But looking back now it might just as well have been, for never did I ever think that I could attain what is now mine.

Winning the Mr. America contest is a wonderful honor. I consider myself as representative of all those who entered, which makes it my duty to encourage and promote the physical activity in which we are engaged. It is a great and wonderful thrill and a feeling which I wish I could share. To those who have encouraged and inspired my endeavor I would like to stop here to say, thanks. 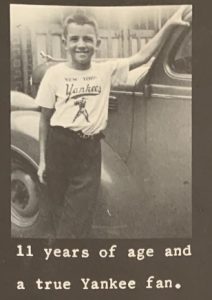 Always as a kid I was impressed by the ads in the magazines which asked the skinny group if they would like to be a new man. The ads of Jowett and Atlas were of that type.

Actually, the first magazine I bought was an issue of S&H with a routine of Jim Park’s inside. The remnants of that issue are still lying around here. For the first couple of years my interest was merely exploratory. I bought and read most of the magazines but did nothing worth speaking of far as training is concerned. A couple of friends in the neighborhood fooled with a small set the father of one of the fellows had bought.

There was no instruction for us to follow and very little enthusiasm on our part. 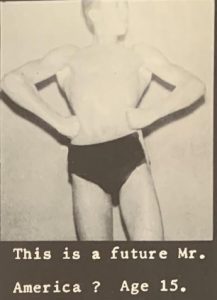 At about at the age of 15 or so the bug bit again and with the donation (and confiscation) of a couple of small sets I started training at home in the basement. Occasionally a friend, Ron Aprea, trained too but his heart was and is with music and now he is an excellent sax man.

I constructed a set of squat racks and a “prone” bench. My training usually did not consist of more than squats, bench presses and rowing. Occasionally I did some curls. I have always liked squatting and consider it the most productive and beneficial of all movements.

About this time I weighed around 145 at the height of 5’9″. I was still growing so that every five-pound gain in bodyweight would be accompanied by a gain in height.

Physically I remained on the thin side for the next two years. My training for this period of time never consisted of more than squats, bench presses, rowing and curls.

I concentrated primarily on the squatting, going to reps of 20 on occasion. I never did more than three sets of any exercise.

I took many lay-offs during this time and never trained more than two times a week.

About two years of this type of home training brought me to my seventeenth birthday. I started to shape up and now weighed about 170 at a height of 6′, not a very impressive sight. I had gained some size and shape but nothing to make anyone take a second look, let alone a first.

In high school I became friends with a fellow named Roger Marti. He and his training partner, Joe Canoas, worked out in a small gym. Roger had great lockout power and was also exceptional on the press. He can still press 230 and jerk 300 though he has laid off for over two years. At the club there was access to more equipment. 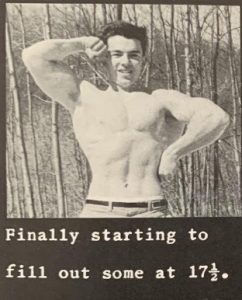 Training along with Roger and Joe helped me, for within the next six months I put on over 20 pounds bodyweight. I remember that the first workout I squatted with 250 for 12 repetitions, bench pressed 170 for six. As indicated, my pressing power was far behind what it should have been.

The gain in bodyweight during this period could be attributed to the fact that I stopped growing in height and the increase in the frequency of the workouts. About this time I became friends with a fellow named Bob Burke. Bob, who had many years of training behind him, did help me a great deal in forming different training routines.

One year later, in the summer of 1957, I entered my first contest. Bob had encouraged me to do so. It was a Mr. Muscles contest held at Rockaway Playland in New York. I finished ninth out of twenty-one contestants and felt pretty good about it. The contest was won by a little giant of a guy Larry Gaisen.

Besides being my first contest as an entrant it was also the first I had ever seen. It was a great thrill to enter and also to see the rest of the contestants.

In the fall of 1957, I entered Adelphi College on Long Island. I continued training regularly and decided to enter contests in the winter. My first was a teen-age Mr. Junior Metropolitan, which I won. I was quite happy to say the least.

the Mr. Teen Age and Mr. Junior Suburban contests followed, I also placed third in the Senior Mr. Suburban, the first time I had ever placed in a senior event.

I trained very little during the summer of 1958. In September of that year I trained for the Mr. Eastern America contest. The contest was won by a great Elmo Santiago. I had the good fortune to place second to him, trying on points. It was a great experience for me gave me inspiration to continue training.

The following winter I entered a few more local meets but did not fare well. In June I went to York for the first time and entered the Mr. teen-Age America contest, which I won. I was happy, for this would have been my only opportunity to enter as I reached my twentieth birthday in July. It was a national title and I felt very good about it. That summer I returned to York to see my first Mr. America contest.

In September I was back at it but decided to try something different. Up to this time I had never weighed more than 205.

By January of 1960 I reached a peak of 226. A friend, Sal Ferrari, who is terrific in his own right, helped me quite a bit with the diet end of it. Up to this point I had ever really paid any particular attention to it.

With no particular practice on the three lifts I had done 220-200-275 prior to bulking. After this I was able to do 280-245-335. This was all done in horrendous style for I never practiced form. The experiment also helped me gain athletic points for the Mr. contests I did enjoy entering the lifting meets and will probably enter again when I can bulk up again.

In April of 1960 I decided to trim down again with a complete change of training method. After one month I entered the Junior Mr. America at Schenectady, New York. I finished sixth. Two weeks later I entered and won the Mr. New York State title; a great and wonderful guy by the name of Ken Hall finished second.

The New York State was a turning point, for I decided to enter the Mr. America in Cleveland that June. I finished fifth and to explain my feeling about this would be difficult.

I knew there was room for improvement but I felt if I kept training hard I had an outside chance of placing high again the following year. The idea of winning was remote but it was a pleasant thought on the long drive back home.

The following fall I trained for and won the Mr. Eastern America contest. At this show I won the Most Muscular and all subdivisions except abdominals: 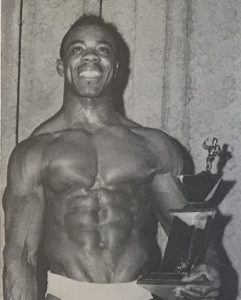 A previously mentioned fellow by the name of Ken Hall took that; his midsection ranks with the greatest. I planned to enter the Mr. North America two weeks later but a serious infection in my right hand interfered with that idea.

Then in January of 1961 I began training for the Mr. America to be held in Santa Monica. With an occasional week off here and there I trained steadily until June. My routine called for five-times-a-week workouts. During this period I entered and won the Mr. Atlantic Coast competition. In May I entered the Junior Mr. America at York. Since I was planning to enter the big one in California, I had hoped to with my section of the Juniors. I placed second. A funny thing happened before we went on. That day I had eaten what could be called a huge amount of fruit and juice.

The reaction I got from it made me think I had appendicitis. I doubled up in a corner until about ten minutes before the show. It was a frightening experience. A packed schedule preceded the Mr. America. Final exams, my graduation from college, my brother’s wedding, my prom, plus the arrangements for leaving for Los Angeles. All went well though and I arrived a week previous to the contest.

Conditions were ideal. A good friend, Bill Stathes, arrived and together we trained up until contest time. I dropped a few pounds and got some color. Ray Routledge won and I placed second. I also placed second in the Most Muscular.

To say that I was elated would be putting it mildly. I went to San Diego while in California and visited Leo Stern. Leo is a great guy and was really encouraging as far as my chances for 1962 were concerned.

I returned to school in September. I trained regularly until December. In February after about a six week layoff I began training in earnest for the big one in Detroit. Placing second the year previous made the mental pressure even greater. The competition at the Seniors is always good and I do not envy the predicament of the officials. In May I won the Junior Mr. America at York. This victory made me very happy.

Through the last six months the encouragement and enthusiasm of two people was of great help. First Tom Sansone, who was always ready with advice whenever I needed it.

Second my training partner, John Lesser, whose enthusiasm helped push me when I felt like slowing down. John is a strong presser though his main interest is with bodybuilding.

What happened in Detroit is now history, so to speak. It is my desire to be a worthy representative of the title that I can now call my own.”