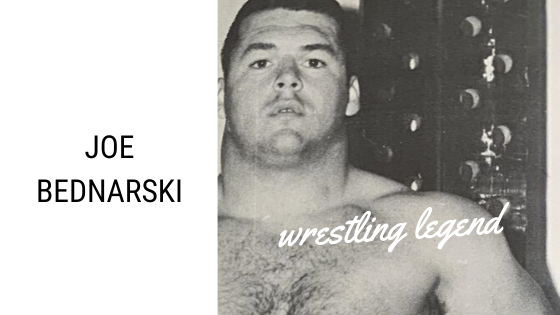 Józef Bednarski (born January 21, 1941) is a Polish-American former professional wrestler and bodybuilder, best known by the ring name Ivan Putski. He was given the nicknames “The Polish Hammer” and “Polish Power”. In this article you will learn how Mr. Bednarski trained before he was bitten by the wrestling bug. As a youngster he used to play football and train very hard. Here’s Ivan Putski’s life story and workout routine, have fun – Mr. Berg

Joe Bednarski’s story begins January 30, 1941, in Poland; there Joe came into the world at one of the least promising times in history. Adolf Hitler’s Nazi war machine had marched over most of Europe.

In 1950 Joe got his first glimpse of the Statue of Liberty as the ship he and his family were on sailed into New York Harbor.

But the big city, where most immigrants got their introduction to America, was not be Joe’s new home. In sharp contrast to the bright lights of New York, Joe’s home was to be a dairy farm in Smithville, Texas, a small town located a short distance from the State Capitol, Austin. Here Joe spent two years working on the farm.

In 1952 the family made the short move to Austin to live. It was at Fulmore Junior High School in Austin that Joe was introduced to the American game of football. Soccer had been the sport in Europe.

Football became Joe’s first love and it still is. He played for two years in junior high and then moved over to William B. Travis High School.

After three years with the Travis Rebels an event happened that was to prove of great benefit to his career.

It was Joe’s senior year and one day as he crossed the campus he saw a fellow student struggling with a heavy object. Joe crossed the campus to have a look. It turned out to be two wheels on an iron bar (not weights). The student engaged in lifting the cumbersome bar was Danny “Wildman” Hodnett.

He offered Joe a shot at cleaning and jerking the bar, and he made it on the first try. Danny suggested to Joe that he get on a program of weightlifting. Joe worked out on and off for about a year but by his own admission did not become a serious trainer until he went into the army.

Joe was naturally husky, weighing 185-190lb on a 5’9″ frame at the time he began lifting. But with the advent of his serious training schedule he built himself up over the next six years from 190 in 1959 to 220 pounds of solidly packed, well distributed muscle.

Joe was a halfback in his army days, but with the added weight and power from lifting he moved to fullback in 1961 when he enrolled at Southwest Texas State College at San Marcos, a small town thirty miles from Austin at the edge of the rugged hill country.

Joe played the first half of the 1961 season for the Bobcats. In midseason he joined the reserve outfit he had entered upon leaving the service, which was part of Texas 49th Armored Division, in meeting the call of the late President John F. Kennedy to be prepared in case the crisis in Berlin became worse.

In mid-October, the 49th left for Fort Polk, Louisiana, where Joe spent the next ten months as an M.P.

Joe was out in time for the 1962 season and joined another Travis ex-weight-trained Gibbs Franki (All Lone Star Conference 1961-1962) in giving the Bobcats one of the best one-two punches a small college could ask for.

In 1963 with Franki graduated Joe took over as the top power runner in the Bobcat attack and helped his mates to a 10-0 season and a Lone Star conference Championship.

Joe made his senior year, 1964, one to bow out on. The Bobcats slipped to 8-2 (both losses by one point), but Joe was never better. He led the team in rushing with over 600 yards. Joe’s efforts did not go unrewarded. He made AL Lone Star Conference, the Dallas Morning News’ All Texas College (small college) team, and received honorable mention on the N.A.I.A. All American team.
Joe’s physique is worthy of a few words, for although he has never trained with bodybuilding as his major objective, he has acquired one of the most massively impressive builds in the world. Naturally blessed with a stocky yet graceful framework of the John Grimek type, he had added to it by his years of regular training and his participation in athletics. He exudes power. He is sturdy and thick from every angle without being fat. From his bull neck down to his 18 1/2 calves, he is herculean.

This is Joe’s training program in preparation for pro football!

To keep his wind in shape Joe goes out to the track at the end of his Tuesday and Thursday workouts and runs four 220 yard dashes.

Joe rests on Wednesday and the weekend. As stated he has unbelievable recuperative powers and recovers after a good night’s sleep of 10 hours.

Joe comes by his ability in football naturally (his brother Fred was the first soccer style kicking specialist in the U.S., handling the kickoffs, field goals and extra points for the Texas Longhorns in the mid 1950’s), but he feels the weights have greatly helped his power. As he says, “Weights have helped me a lot in football. The power has given me confidence I can get that first down when there are only a couple of yards needed. The added power has helped my blocking, too.”