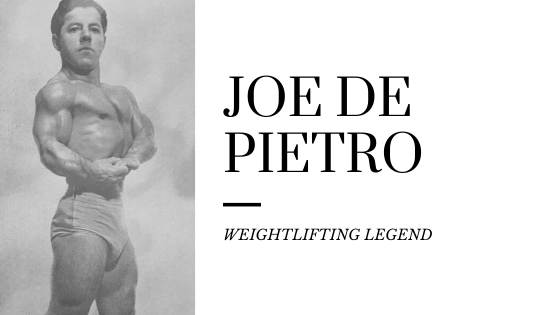 “Much has been written about many of America’s great lifters but very little has been told about one of the greatest little lifters the USA has ever produced.

Joe De Pietro was born June 8, 1914, in Patterson, New Jersey. His Mother and Father came to the U.S.A. from Italy. The stature of his parents and two sisters are short, but his brother, the largest of the family towers over the rest f them at a height of five feet and six inches.

They all have the inherited strength which is Joe’s. Joe’s father was employed on the railroad and often carried railroad ties home on his shoulder which is no mean feat as they weigh in the heavyweight cases.

As a youngster of ten years, Joe was fond of baseball and played on many championship teams during his years of schooling. Not only that but he played on the soccer team which was good enough to win the city championship.

Always coaches and trainers were telling Joe that he was too small to play on the team or to participate in sports. Still when he got a tryout he made the team. It is this same do or die spirit that has made Joe the world’s champion he is. For seven years he was one of Patterson’s outstanding soccer players which is some record when you sonder he was the smallest man in the field of a rough fast game.

In 1937 at the age of twenty three, he turned to weights, but as he went at it improperly and without proper teaching he had the misfortunes of putting himself on the shelf as it were. From that time until 1940 the weights were not on his program. Firpo Lemma another powerful little fellow was working out at the time at the YMCA and was able to press 205 pounds which was the record at that time. After seeing him Joe decided that the weights were his game so he started working out using home made weights he procured from railroad crossings.

Training in his back yard for a period of three months put him in shape. The next step was to join the Columbus Circle Bar Bell Club. After another three months of training with a regular bar. Joe had the fortitude to enter the State Championships against the formidable Firpo Lemma. Joe was fortunate, for Lemma had an injury which prevented his entering the meet so Joe was the man of the hour. He won with a nice 500 pounds total.

Joe had trouble gripping the bar tight enough for his lifts at that time and was shown the lock grip (finger over the thumb) by the then 118 pound champ, Bill Leardi, who is well known to weight men. To this day he has continued to grip the bar in this manner when lifting.

That same year, 1940, not satisfied to rest on his laurels, Joe entered the Senior National Champion ships held in Madison Square Garden New York. He came in third place with a 540 total. It is remarkable how he rose to fame in such a short time. Toronto, Canada was his next stop. He entered the Canadian Nationals and won with a 555 total.

The taste of victory was his and there was no stopping him. The Western Union Invitation Meet held in New York beckoed him. His opponent, the man who inspired him to lift was none other than Firpo Lemma. This was their contest together and Joe won with a smashing total of 570.

We all must have setbacks – that’s what makes or breaks us. Joe was no exception to the rule. 1941 was an adverse year on his list. The State Championships held in Elizanetj, M.J. was won with the same 570 total. He made 4th place in the Senior Nationals in Philadelphia with a 540 total. In the Canadian Nationals he placed 3rd with a 555 total.

Joe has flawless style in all his lifts. He drops clear and to the bottom in his snatches and cleans, bouncing off his heels. His presses are perfect as they are slow presses from start to finish. There are no fast heaves and no variation of pressing speed. Joe has pressed 225 on the west coast in acceptable style.

Joe is truly a miniature Hercules. He is a rugged all round man as you can judge from a list of his feats.