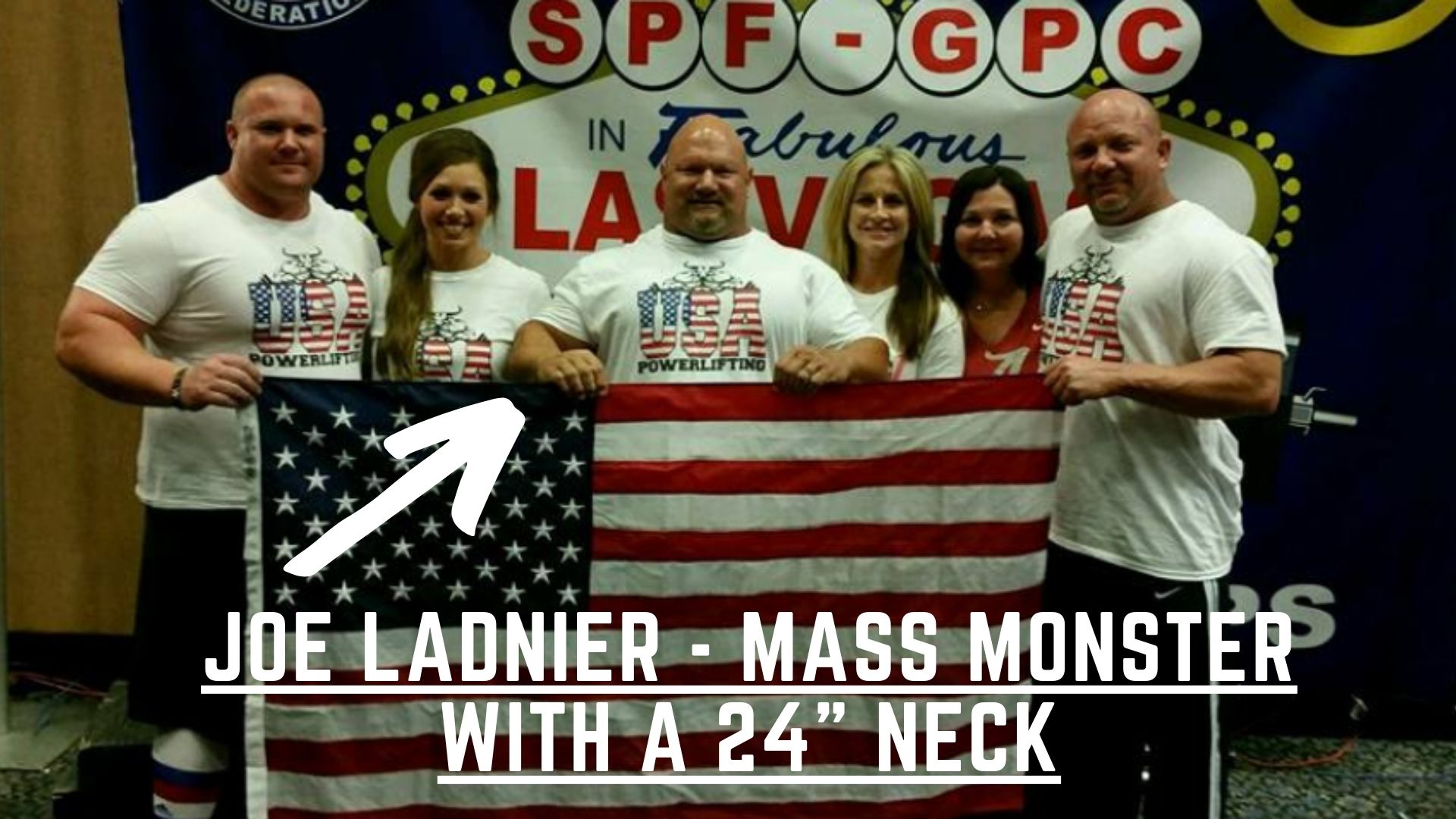 Joe “The Lad”Joe Ladnier burst onto the Powerlifting scene in 1983, when 19 years old, he won the U.S. Senior National Men’s Powerlifting Championships at 242 lbs with a squat of 832 a bench of 556 and a deadlift of 788. He beat such legends as Fred Hatfield and Jim Cash. In doing so, Joe set open men’s world records and teenage world records that have stood for over 30 years. Joe was interviewed by Starting Strength’s Mark Rippetoe in 2014, and the three part interview appears on YouTube. Joe is extremely articulate and has a great recollection of his powerlifting career as well as so many fantastic lifters he trained with, knew or competed against.

Joe won the teenage nationals three times. Joe, Aka the Mississippi Monster, worked for Larry Pacifico, managing one of his Dayton, Ohio gyms, his mail order business and was in Pacifico’s ads which appeared in Powerlifting USA Magazine. Larry taught Joe how to correctly add assistance exercises to his training, specifically bodybuilding exercises to complement his powerlifting training.

Joe relocated to Florida after living in Georgia for a short time. While in Florida he was part of the famous Suncoast Gym Team which had such members as Rick Weil and Bob Chrosniak. While training there, Joe benched a 600lb raw bench at the Florida State Championships. Two days after this bench performance, Joe detached his patella tendon and tore his ACL and MCL. This injury altered the course of Joe’s lifting career for years. The injury occurred in 1986, after Joe switched from his normal wide stance to a closer stance at the coaching of Fred Hatfield.

Joe felt that the switch to close stance would result in a world record as he squatted 600lbs for 20 reps with knee wraps and a belt. A few workouts later Joe was squatting 900lbs when he tore his patella.

While in Florida, Joe became a police officer with a Sheriff’s Department. He did not talk about how or why his law enforcement career did not last longer than 5 years.

In 1988, Joe entered and won the U.S. Drug Free Nationals and the Drug Free World Championships as well.

One of the most successful transitions to Masters and raw competition later in his life. Joe recalled that he took the entire 90s off from competition to focus on his family. He said he always trained during that time period but he did not compete due to his family commitments.

Joe said that he was able to lift at the same World meet as his teenage daughter! After winning her class, his daughter told him that she was not interested in lifting again. Joe said that his son defeated future IPF Champion Ian Bell at a teenage meet, but that as of 2014, his son had recently started training again and was 21 at that time.

As recently as a few years ago Joe benched 525 raw and deadlifted 700 raw as well. There are numerous clips on YouTube that show Joe’s masters level power as well as his younger, senior nationals performances. Joe said he had focused on the bench with a shirt when he came back to powerlifting in the early 2000s and hit an 825 officially!

Joe was on the cover of numerous Powerlifting magazines during his career, specifically Powerlifting USA and Monster Muscle.

Joe recalled impressive lifters he trained with and he described how he trained with Jim Cash and saw Jim deadlift 10 strict repetitions with 700lbs! One year at the Hawaii Invitational, Lee Moran missed a 600 lb raw bench, after squatting well over 900lbs. The next day, they went to the gym and Lee benched the 600lbs raw. Lee was Joe’s height of 5’7” but outweighed Joe by 90lbs at 330lbs!

A 1984 Powerlifting USA article by fantastic author Ron Fernando described Joe’s 18 month meteoric rise in strength, up until he became 20 years of age. Ron detailed how Joe entered his first meet at 160lbs in 1979 and did 350 290 430 lbs. The most interesting fact of this performance was the Joe had never performed a squat or a deadlift prior to the contest! Joe had bench pressed before the contest but his strength primarily came from gymnastics training- much like his 80s rival and later mentor, Fred Hatfield. Joe’s first mentor was a man named Larry Plumlee who was great lifter in Mississippi where Joe grew up. He guided Joe from a 1350 total at 165 to an 1802lb total at 198 in 2 years!

In 1984 when Joe was winning National Championships and competing at the worlds, he would squat on Sundays and Wednesdays. Joe loved Soviet style jump training to supplement his squat workouts. Fernando detailed a workout at the time that he worked up to 865 for 3 reps in a squat suit, knee wraps and a belt, followed up by sets of 3 second pause squats for triples up to 715lbs! Joe would perform walkouts with between 900 and 950 lbs. Joe would at times take the walkout weight and do a half squat to feel the weight.

On Joe’s light squat night he would go up to 405 for 1, using perfect form and explosiveness. Both leg workouts included 3 sets of 10 reps of box jumps, leg extensions and leg curls. Joe boasted a best vertical box jump of 48”! Joe was able to maintain his gymnast flexibility and was able to complete full splits even as a 900lb squatter! This is very similar to Ronnie Coleman.

Joe’s bench press training was similar to his squat work, as he had one heavy bench press workout per week- with the heavy session on Sunday working up an inverted pyramid to a set with 518 for 3, followed by long 3 second pause work with the bar high on the chest with up to 407 for 3 reps. His muscle memory workout was Thursday, during which he would work up to 315 for a rep or 3with perfect and explosive form. On both days, his assistance would be cambered incline benches for 5 to 8 reps with up to 250lbs , and flyes with 70lb dumbbells. The day after his bench workouts, Joe loved to do arm workout superset style with up to 305 for 6 reps on the Ez curl bar to his chin with tricep extensions! Joe has amazing arms- I have seen them, and he built them with ez bar curls, push downs, dumbbell curls and the extensions.

Joe has had the hardest time with the deadlift, which he trains on Wednesday with the same type of inverted pyramid he uses on his other lifts. Ron described a workout that peaked with a top triple of 730 for 3 reps! Joe had success with block deadlifts with the weight positioned below his knees, with a huge PR of 825 for 3. Shrugs and hyperextensions with a hundred pound plate for 3 sets of 10 reps.

Joe described to Ron that as he got stronger, he got more and more in control of his emotions. The Lad was able to stay in a state of Zen calm that was as impressive as his rapid strength gains.

I only met Joe once, at the 2003 APF Senior National Championships at Universal Studios Hollywood. Joe did not lift that day, even though he was the defending National champion from 2002. Joe was extremely impressive in person, with more muscles on his 5’7” frame than I had seen on almost any person.

A review of OpenPowerlifting.Org documents that Joe went on to win one GPC World championship as well as numerous SPF National Championships between 2009 and 2016.

Joe’s Instagram account, thejoeladnier, shows a healthy and happy looking Joe today. On August 7, 2021, Joe exhibited his Alabama Hall of Fame Plaque on his page. What a great honor to a very worthy recipient. Joe’s Instagram shows a happy family man who is far more jacked than almost any 60 year old I have ever seen. I suggest you follow the Lad’s training philosophy if you seek to train and compete successfully for over 4 decades.