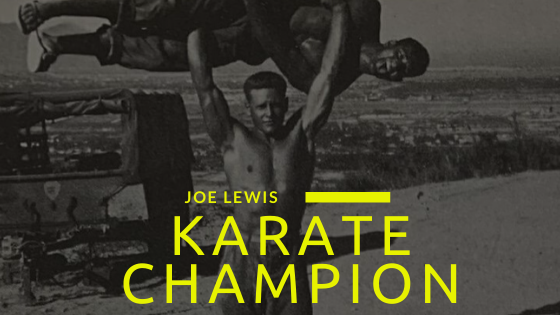 Joe Lewis was weight training karate champion. He was a veteran of the Vietnam War and even trained with Bruce Lee. Here’s Joe Lewis’ training philosophy for Karate! – Mr. Berg

Born and reared as a hard working farm body, physical conditioning has always been a part of his life. He had envied the great athletes of the world since he was a kid, especially the great fighters and muscular weight lifters. As he grew older, naturally the interest increased.

At the age of sixteen, he was accidentally exposed to an old homemade barbell a group of older youngsters were experimenting with.

He started doing daily exercises with the barbell which consisted of simple presses and curls. Enchanted by the fast results of his two exercises, he later purchased a 240 pound set of York barbells. A homemade benchpress and squat rack provided him with enough equipment to supplement the exercises prescribed in his York courses.

Months later, he started running the mile for their high school track team. He began to lose weight and thus decided that he had better stick to gymnastics and his weights. His weight at this time was 162 pounds for a 5 foot 10 inch frame.

Nearing his eighteenth birthday, he decided to build his own gym. He purchased a 400 pound York Olympic set, several more duplex sets, a squat rack, a couple of multipurpose benches, and other weightlifting equipment. He kept generous amounts of supplements on hand to aid his diet.

On his eighteenth birthday he enlisted in the U.S. Marine Corps. After four months of boot training, he was anxious to resume his weight lifting workouts again. His body weight slowly increased back to his usual 190 pounds. He was becoming introduced to many different virtues of bodybuilding, and decided to land on a program best suited for his body structure. He devised a three day routine, training seven days a week.

One day he would work his arms, alternating between biceps and triceps, and finishing up with his forearms. The following day he would rest his upper body and do lower back work and his legs.

Then the third day he would be back to his upper body, where he included shoulder, upper back and chest work. On all three days he would do midsection and breathing exercises along with a session of boxing, wrestling, or gymnastics. Plus many units of the Marine Corps engaged in early morning calisthenics and running.

At this stage he took on a weight gaining program using Gain Weight tablets. In fifteen day he gained seventeen pounds, increasing his weight up to 207 pounds.

He leveled off for a couple of months at this new body weight while gaining another five pounds.

Then he decided to become a pro wrestler and went on another gain weight program using the gain weight supplements again.

This time he increased from 212 pounds to his maximum weight ever of 225 pounds in fifteen days.

So in the past four months after leaving boot camp at a body weight of 180, he had gained 45 pounds with the aid of weights and proteen tablets.

He kept this approximate bodyweight on into the following year. He went on a crash program to shape up his muscles for more definition and proportionment. In six weeks he lost 46 pounds down to 179 pounds body weight, still training everyday and using his protein supplements.

This was after his nineteenth birthday, and he was shipped out to Cuba and haiti in the Caribbean on a four month ordeal.

Returning to the mainland in the fall of that year, he was once again anxious to return to his weight program. He had drifted back to 190 pounds body weight and about 5 months later he accomplished the best personal records of his life at the age of 19 and weighing 203 pounds.

These were his best lifts, and his favorite was the front squat:

This is his three day routine. Each day he included a pre warm-up period of stretching exercises. Once a week he would attempt a maximum with each exercise. 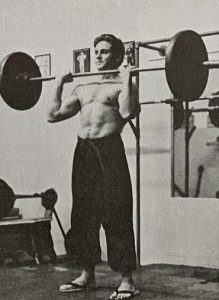 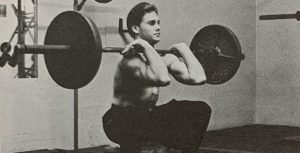 He followed this routine regardless of the day of the week. His daily midsection work consisted of incline sit-ups, leg raises, and bent over body twists. He also ran several 25 yard dashes and sometimes went on a long run to give his body more speed and endurance.

From time to time he would step out of the base weight room between sets to watch the Karate and Judo teams working out. They fascinated him with their well controlled speed, versatility, and secret defense techniques. Their training was much harder than theirs with no rest periods between exercises. He also took notice of their meditative perspectives and noticed that they were attaining a certain mental state of mind in practice just as a weightlifter did prior to a lift.

He was soon transferred to Okinawa where he immediately took up the study of Karate more seriously. The rough, long workouts and humid weather soon trimmed him down to his 190 pound body weight. 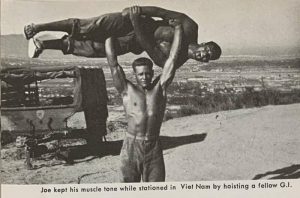 His workouts were interrupted in February of ’65 where he was a member of the first major combat unit to land at Da Nang, Viet Nam.

He was in charge of a radio team whose work consisted of maintraining the primary comunication trunks within a Division. He also held many self-defense classes whenever permitted during his stay in Viet Nam.

Later he returned to Okinawa where he helped his instructors teach during the closing months of his two year tour on the island. He had been awarded a black belt under two karate masters before he left Okinawa.

According to Joe Lewis a belief taken for granted by many non-athletic people os that weightlifters are too “muscle bound” and uncoordinated to participate in sports, or have no practical reason for their heavily muscular frames. Contrary to this fallacy, he entered the 1966 U.S. National Karate Championships in Washington, D.C., and won not only the first place black belt sparring competition and Grand Championship, but also the best form competition.

Joe Lewis encouraged all students in the martial arts to seriously include a weight program in their training. This simple exercise course will develop every muscle group in the body. Do the exercises fast with cheating motions, using only seconds between sets.

This routine should be done three times a week after your regular workout, and followed by a brief run and stretching exercises. Use maximum weight with 10 to 15 reps in each set.

The muscles may become tight and flushed at first. But the cheating action with very little rest is to give your muscles the tendency to rehabilitate quickly. Also it’s to develop more power with natural tensioning action as opposed to tight strong muscles with concentrated contraction, and to increase the flowing whip like motion throughout the body frame. Other muscles like the neck, lower back and midsection will be brought into action in the same manner as they are when one is sparring with a partner.

He worked as a sparring assistant in their Okinawa-Te Karate Org, with headquarters on the famous Sunset Strip here in Hollywood. He attended L.A. City College as a part time student. His parents lived on a farm near Raleigh, to which his father retired after working thirty years as a college professor at N.C. State. Of five sons, he was the fourth and only remaining bachelor.

Joe’s social life consisted of spending lots of time at the beaches during the summer, parties, listening to modern ballads and folk music and dating.