Joe Lindner – Made in Bavaria 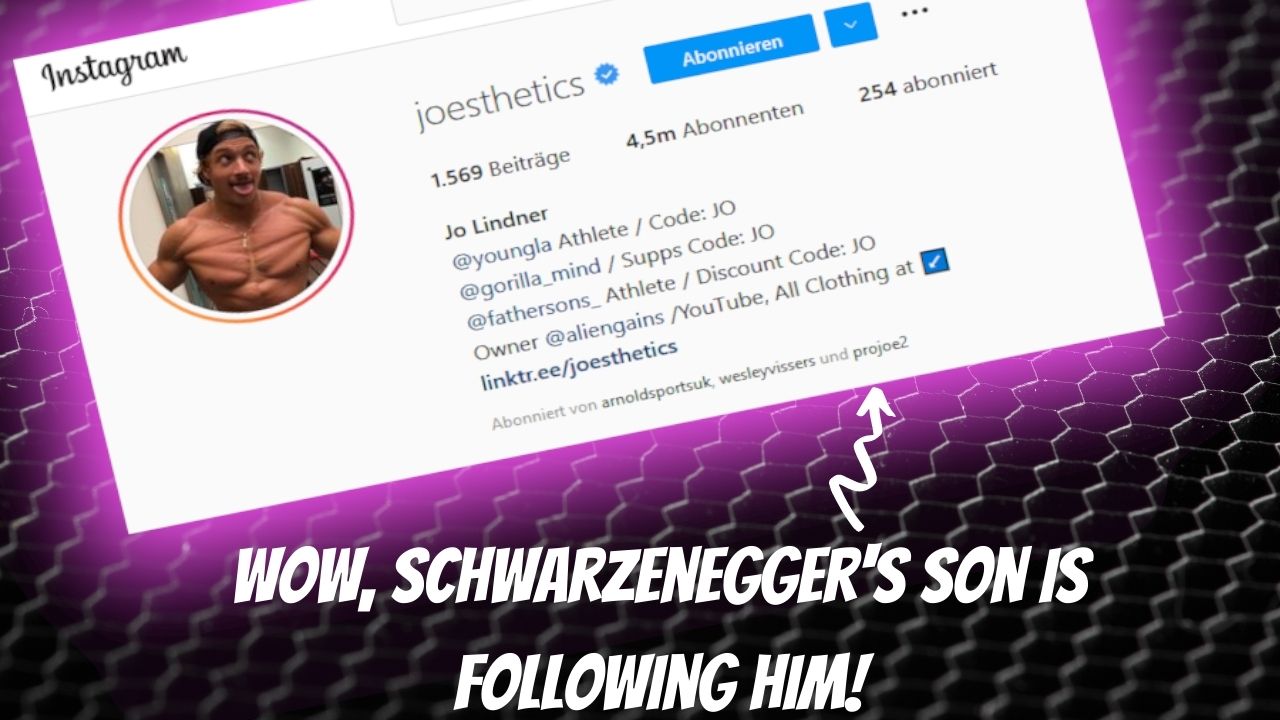 Jo Lindner aka. “Joesthetics”, originally born in Bavaria, Germany, is one of the most famous fitness entrepreneurs with 4,5 million followers on Instagram. Even Arnold Schwarzenegger’s son Joseph Banea is following him on Instagram.

On the German bodybuilding website Team-Andro.com, I found an old post with the title “I want it so bad! 18-20#yo [Full] Transformation” posted by Joe Lindner, published in December 2013.

Team-Andro is the biggest platform in Germany on the topic of bodybuilding. Many famous German bodybuilders get their knowledge from this platform. The website and forum have existed since 2006, and I must admit, the website already belongs to the German fitness culture. The knowledge offers a great added value for all athletes.

Joe started this thread to document his training. Additionally, it gives an interesting insight into Joe’s beginnings, and his goals. Early on, he pursued the goal of becoming known through bodybuilding and making a living from it.

Right at the beginning, some users criticized him, and they wrote, “Oh, not another influencer. We already have enough of them. Give it up.”

Joe didn’t waste his time with social media; he registered with the German website to read much as possible. He owes his muscle growth to hard training—especially reading books and online articles, which Team-Andro presents.

Joe wrote in that thread, “I became greedier for knowledge and began to read for hours, day after day, week after week, expanding my knowledge about all nutrition and training methods.”

In Germany, we have a ton of great bodybuilding books. One of the most respected on the topic of diet is entitled, “Ernährungsstrategien in Kraftsport und Bodybuilding: Optimal Muskelaufbau”, and it was written by a German doctor named Christian von Loeffelholz.

The book is a decade old, but it is always recommended—especially on the website Team-Andro. Germans also read a lot of American literature on weightlifting, like Starting Strength, Squatting Every Day, and Jim Wendler’s 5/3/1.

Joe wrote about his journey as follows:

“My name is Jo Lindner. I’ll simply start with my story. At 18, I was a ‘non-lifter.’ Nobody would think that I was working out. I also had no endurance. My initial data at 18 years old was 75 kg. I was heavy; my bodyfat was about 17%, but I realized I needed to change something. I was always extreme when I did something. I always gave 120%. Before I started fitness, I was a professional dirt biker. I even had sponsors. I had no reason to take a different path, but in 2011, I injured my knee and had to stop for a long time. I found out that my joints were completely damaged because of the constant vibrations while cycling.

You can also see in the pictures that I was clearly fatter because I gained 4 kg due to the injury. Just fat! So, I said to myself, ‘If you can no longer bike, then you can at least keep fit and lose some fat.’ Quickly, I realized my potential in this area. My training friends gained no muscle mass after 2-3 months of training. It was the opposite for me; due to good nutrition and good training, I achieved success and muscle mass fast! My knowledge grew more, and with the knowledge, I grew successful in training, too! I pushed myself so hard that I almost blocked out everything else that didn’t interest me; I was so focused on my training and nutrition.

My parents thought I was going completely crazy; I started to buy food for myself, I cooked for myself; I weighed everything; I only ever ate what I had cooked myself. When my mother cooked lunch, I did not eat it. I realized that this sport showed me a different way of life, a discipline I did not know before; my entire life underwent a change. I also completely renounced alcohol. My friends looked at me strangely. I was always the only one who did not drink alcohol!

Alcohol gave me nothing! I do not miss it, but when I showed people my success, they were amazed and understood why I do not drink alcohol. Before training, I weighed 75 kg; after about 18 months, I weighed 95 kg. I have built up more fat than muscle mass. I was not really fat, rather ‘swollen.’ Of course, since I did not know everything overnight, I also made a lot of mistakes! No question! For example, I drank Massgainer quite often. In early 2013, I started my diet because I wanted to be in shape for the summer! Meanwhile, my body shape had become worse again but still very solid! I am incredibly proud of my success. For me, it is a hammer performance, and I want to continue to go onstage in 2015! I would like to have more people who specialize in bodybuilding near me since I could certainly still learn a lot from them! Finally, I would like to mention that I am completely natural! No dope. No anabolic steroids! I live the natural way!”