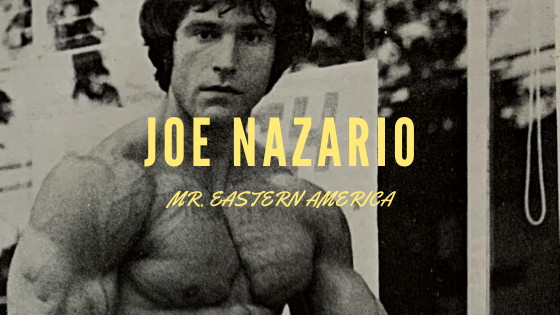 The following article was published by Howard Alpert in 1977 – Mr. Berg

“There is a word that has become very popular in recent years and it is used in describing a select group of unique individuals.

The word is charisma, and it refers to an almost magical quality that certain people are supposed to possess. When a person is referred to as having charisma, he is being complimented as having an extraordinary power, a mystical and mysterious type of aura that both surrounds and emanates from him and, in some way, draws the attention of others. All of us can name movie personalities and sports figures, who are said to have this special quality. We can also designate those superstars of the world of bodybuilding who we believe have this unique characteristic.

There is a bodybuilder in the New York area who, I believe, possesses this “superstar quality” and whose competitive career is progressing at such a rapid pace that I am sure that readers will be interested in finding out about him and his training methods. He is Joe Nazario, Mr. Eastern America of 1976.

When I visit Julie Levine’s Futureman gym in Amityville, I can usually tell if Joe is training even before I actually see him on the gym floor. There is a different atmosphere when he is “doing his thing” The gym is quieter than usual, with the other trainees either working harder than they normally do or just standing off to the side, somewhat in awe, as they watch one of the hardest training bodybuilders to be found anywhere. To see Joe train can be likened to watching a tiger stalking his prey. He does not stop moving once his workout starts. Then it is a continuous flow of motion with exactly forty-five seconds rest between sets.

At the instant that the clock indicates the allotted rest period is over, Joe attacks. When a set is completed, Joe spends the intervening time either in tensing the part he is working or in setting up the equipment for his next exercise. There is no wasted motion during the entire session. Joe is completely oblivious to anything else that may be going on around him.

He is totally absorbed, his concentration so deep that it affects those around him by spurring them on or shocking them into silence.

“When I am training, the only thing that exists for me at any given moment is the next set I have to do or the repetition I am doing at that second. It is just me and the weight, a struggle to see who will be the winner and who will be the loser. I don’t like to lose.

Everything in me – all of my senses- are concentrated on whatever part I am training. Each repetition, each set, is something that only exists for a moment or two and then is gone forever. If I haven’t drained everything from it, it has been a waste. I don’t have the time to go through wasted motions.

“Training is serious business. There is only one way I know how to train and that is totally all-out. I want to be as great as I can be, in as short a time as possible. So I train as hard as I can, every set, every workout. I want to know that next week I will be better than I was the week before. I want my personal record book to show that my poundage’s have increased. I want the mirror to show me that I have improved, that my muscle thickness and density have increased, that my muscle shape is better, that my definition is etched in more deeply.”

Joe almost didn’t become a bodybuilder. He was very athletic and excelled in several sports. It was while doing his four-year stint in the Air Force that he casually began weight training to increase his strength so that he would be even better in the various sports he played. Fate, in the form of a football injury, took Joe off the athletic field and brought him into weight room on a regular basis.

When Joe completed his service obligation, he continued his weight training activities on a three-times-a week basis, his objective still being to increase his strength. Fate intervened once again. The gym Joe was training at was sponsoring a local contest. On a dare from some of the members, Joe entered. “I didn’t have the slightest ideas of how to pose. One of the contestants showed me three or four poses and that was what I did. I couldn’t believe it when I was awarded the second-place trophy.”

That second-place win convinced Joe that he should change his workouts to that they would give him increased shape and size. He also sought out additional training information.

To do this, he changed his training quarters to Tom Minichiello’s Mid-City Health Club. “Tom was very helpful. He helped me plan a split training routine. He introduced me to some important principles of nutrition. He was a constant source of encouragement tome all the time I trained at Mid-City.”

During the 1974-1975 period that Joe training at Mid-City, his progress was so great that he entered the IFBB Mr. America Contest in California.

“Although I felt I could have placed higher than fifth in my class, everyone in California told me that I had done very well against very strong competition, especially since I had only been training for bodybuilding for a little over a year. my trip to California was also valuable in another way. I learned that the California bodybuilders were training just about the way I had been.

They weren’t doing anything that I hadn’t done. In fact, many of the guys there said that I trained as hard as anyone they had ever seen. I returned to New York determined to train even harder.”

Joe moved a few months after he returned from California and began training at Futureman. “The Futureman gym is really well equipped but that is only half the story. The most important part of training out here is that I met and have become close friends with a bodybuilder whom I have the greatest respect for.

He manages the gym for Julie Levine and his name is Tony Pandolfo. To say that he is not only one of the best bodybuilders competing today but one of the finest trainers to be found would really be an understatement.

“Tony helped me greatly in analyzing my training. He showed me how to really tear my training routine apart and to check each exercise for its effectiveness. We sit down every week and review what I have done and discuss any revisions that either of us thinks should be made. Tony really makes me go deep inside myself and think out loud. He will only make suggestions and stresses that I must make the final decisions. I keep telling him that I am still relatively new to bodybuilding but he just laughs and says that he has been training for fifteen years and is still learning.”

Joe entered the Mr. USA contest at the end of 1975 and placed second in his class. “I thought I had beaten Denny Gable, but I guess the judges saw it differently. I was gratified that I moved up to second place though, because I beat out some contestants who had placed above me in California.”

The Mr. Eastern America contest was scheduled to be held in March 1976 and Joe really went all out.
“I continued with my six-day a week training but I also did some extra training in the evening. I went on the strictest diet I had ever been on.” Joe also went home with the title of Mr. Eastern America of 1976. In doing that, he defeated over a dozen of the major physique contestant on the East Coast.

Joe is now determined to become one of the greatest bodybuilders of all time. “Of course, I am going to continue working for my college degree but all of the rest of my energy will go toward fulfilling my goal to be on the same level as any of the superstars that are around today.

I have really only been bodybuilding for about two years. Most of the guys who are on top have at least ten years of bodybuilding training behind them. I would like to be able to do it in half the time or less.”

“Joe’s 5’10” physique stretches the tape to 50″ around his chest, 10″ around the arms, 26 1/2″ at the thighs, and his 18″ calves complete one of the most chiseled and symmetrical developments in competition today. His training routine is equally as impressive.

Joe follows a basic pattern in his exercises of doing eight sets of eight repetitions. On the heavier exercises, he works up in weight each set. His workouts are one uninterrupted flow of movement with the exercises strictly performed with intense concentration. 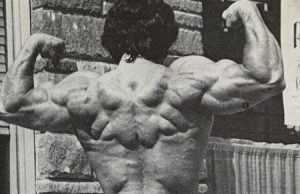 Joe works his abdominals and calves daily. He does four sets of fifty repetitions in the incline situps and eight sets of fifteen repetitions with two hundred fifty pounds in the calf raise.

Joe doesn’t vary his training much throughout the year. He will occasionally change an exercise but otherwise stays with the program detailed above. Of course, his poundages are increased whenever possible.

Joe follows a good diet during the year, taking in liberal amount of protein and natural carbohydrates. Six weeks before a contest, Joe will lower his carbohydrate intake to thirty grams daily. He will also take substantial amount of Vitamins C, E. and B-Complex.

At a height of 5’10” and a weight of 205lb, Joe displays an incredibly defined, symmetrically balanced physique with the following measurements: Chest 50″; waist, 31″; arms,. 10″; and calves, 18″. He is one of the most formidable threats in physique competition today and he will pursue his goal of winning every major physique title with the same determination he has shown since he began serious bodybuilding training.”